The Fabian Commission on Food and Poverty have released an interim report that shows that low income households are being left behind in the nations move toward healthier eating. 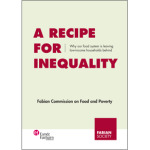 The report, a recipe for inequality, shows that for low income families:

Pressure on household budgets arising from increasing housing and fuel costs are leading lower income households to ‘trade down’ in relation to food.  They are eating cheaper, more processed, less nutritional food; high in fat, salt and sugar.

So what can be done?

The commission is still working on this, but has some interesting comments on what the answer isn’t:

The tentative conclusion is that there is a need for fundamental, structural change, not more ‘sticking plasters’.  The Commission states that:

We would therefore welcome evidence of potential solutions at a variety of different levels, from large scale changes to how we think about or organise the food system through interventions by government, public agencies or the food industry itself, to more practical local and community based solutions.

The Birmingham Food Council are bringing together a range of voices to discuss a strategic response to food poverty in Birmingham on 11 May.  We hope that this will provide some useful input into the debate.

The full Fabian Commission report can be read here.  The commission is due to release its final report in the summer of 2015.

John Middleton, a member of the Fabian Commission on Food and Poverty also sits on the Board of Directors of the Birmingham Food Council.

2 thoughts on “A recipe for inequality – the Fabian Society”