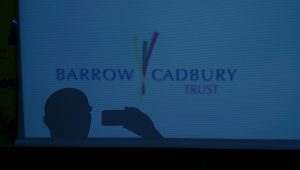 So, where can we learn from other times and other places about communities and food?

The conversation at the Birmingham Food Group turned to history both to the war and the memory of family dinners sat up at the table in the 1970s.

Here are a few snippets:

“The wartime led to a common purpose and people were told there was a common enemy. They should not waste anything and if they did they were helping Hitler. We like the fact that people worked together because of war. We don’t like the other side effects.”

“In the 1970s growing up, we all ate at the table on china with a knife and fork with a glass of water. It was meat and two veg and if we didn’t eat it there was nothing else.

“Family meals around a table.

“Some places still value cooking and eating together. People value spending time together and food is just part of that.

“In Wales, every child has a free place at the school breakfast club funded by the Welsh Government.

“In McDonalds in Europe they know that people eat in different ways so they have different menus for different countries so people can eat as a family. Here? We’re told that that’s how it is in North America and that’s it.”