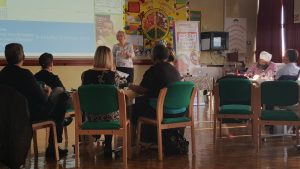 The event is looking for different perspectives of the food supply system from attendees and asks a pretty big question – are drivers of emergency food aid here to stay? And if they are, how can Birmingham address this at a city level?

But in the first group session, things kicked off with this question: what are the actual drivers of food poverty – now and in the future?

Representative of a charitable organisation that provides food banks talked about access to theirs – people have to be referred / on average, access twice / there to meet a crisis need, not to offer long-term support. It’s a very holistic approach – not just queuing up for food and sent away. Looking at bringing advisers into the food bank from, say, the CAB, job club etc. It’s a lot more than food at a food bank.

Food poverty – interesting question asked, here. Why is this distinct from poverty per se? Useful to shine a light on one of the consequences of poverty. There are other ‘titles’ of poverty – fuel poverty, for example. The best solution is to look at the causes of inequality and poverty – not focus on food, or fuel poverty.

Question asked – How can we get to hidden people?

Representative from a small housing association in Birmingham – food is central to the care at sheltered accommodation schemes. Couldn’t think of anyone from the scheme who would need to access a food bank. But said elderly people can sometimes get ‘lost’ in much larger associations

1 in 5 people say they skip food themselves to feed their children.

Group then discussed what future drivers may be?