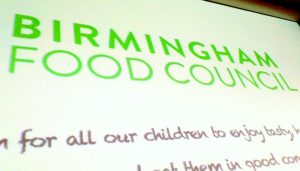 The Greeks invented Utopian thinking whereby people would imagine what the world around you could look like.

In the West Midlands, the Birmingham Food Group imagined what 2025 may look like and all the people are well fed.

A mix of a green ‘Back to the Future’ and the fairer elements of 2015 society flourishing.