Not a single one of the Coca-Cola ingredients does you any good whatsoever. Indeed most do harm to your health in small quantities, all do harm in quantity: carbonated water, coca-leaf extract, caffeine, phosphoric acid, high fructose corn syrup & sugar, artificial sweeteners and sulfite ammonia caramel (E150d). 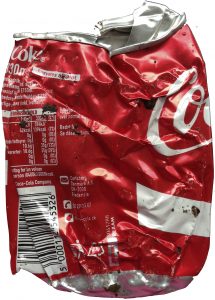 Local NHS services and Birmingham Public Health have to pick up the tab for the health consequences of people drinking Coca-Cola and other similar beverages while . . .

Birmingham City Council has the costs of dealing with the collection, recycling or disposal of the glass, plastic or cans in which the coke is packaged.

Coca-Cola sells more than four billion drinks in Great Britain every year. The glass, plastic and cans of these 4bn products are collected before being recycled or put into landfill by local authorities.

Pro rata, Birmingham City Council is responsible for 58.2M empty Coca-Cola bottles, plastic containers and cans — along with all the associated costs.

acknowledgement: A big thank you to Bartow Elmore (@BartElmore) whose recently published book Citizen Coke: The making of Coca-Cola capitalism provided a lot of the info and insights behind this series of blogposts about Coca-Cola.

[Featured image is by Lorena.]