HM Government publishes “Sector Resilience Plans”. The latest one was published in 2014 and can be found here. 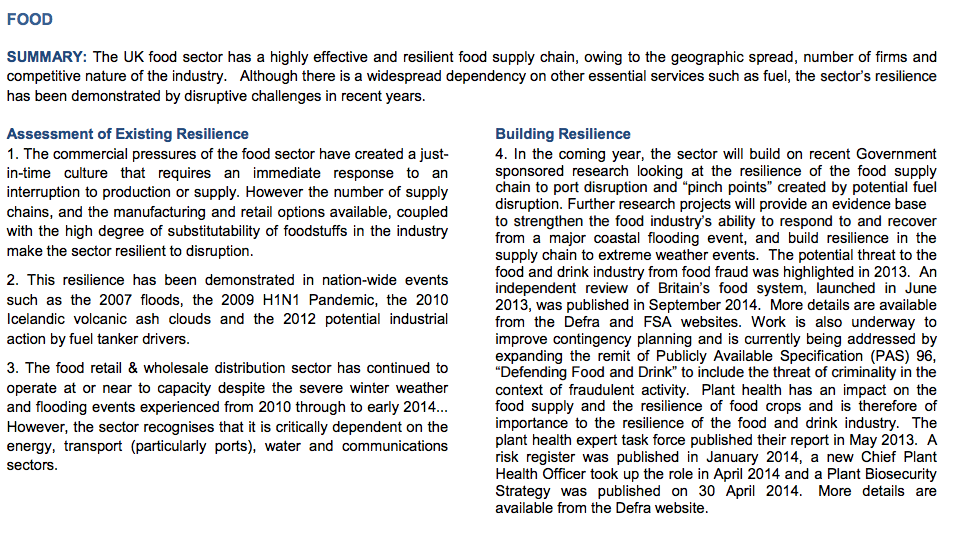 In summary, there doesn’t appear to be a plan. ‘Just-in-time’ networks are highly efficient, but lack robustness. City food supplies ran very low during the 2012 tanker driver strike. And  the impact on city food supplies isn’t mentioned at all in the National Risk Register (NRR, see below).

I’ve searched the Defra website for more info, and found none. (Let me know if you find any there!)

The FSA, however, made a call for research in September 2015; see here. They’ve also published PAS 2014: Guide to protecting and defending food and drink from deliberate attack.

It would be neat to know what early warning systems are in place and, as importantly, who’s monitoring them and who within the Government is informed about said monitoring.

It’d also be interesting to know how many days’ food supplies there are within a conurbation such as the West Midlands — or indeed London, given the “just-in-time culture” of food suppliers and that “they operate at or near capacity”.

How rapidly could the sector respond in an emergency in relation to (a) a single conurbation affected and/or (b) several major conurbations and/or (c) a threat to a food staple.

The three reports mentioned in the last paragraph of the Sector Resilience Plans are:

The National Risk Register (NRR) of Civil Emergencies is the unclassified version of the NRR. This link is to latest one published in March 2015. On pages 12 & 13, it presents two matrices, each with an ‘overall relative impact score’ on one matrix and ‘relative likelihood of occurrence in the next five years on the other. On page 14, it lists four ‘high risk priorities’:

On page 15, it identifies ‘antimicrobial resistance’ (AMR) as the only item under ’emerging and longer term issues’.

Of interest to you might be the scenario wildcards developed as part of the Birmingham 2050 Scenarios Project in 2013.

One thought on “The Government’s Sector Resilience Plans”