At the recent Local Nexus Network meeting at Birmingham Business School, I listened to a fascinating talk by Mark Pettigrew who is an expert on growing spuds. He’s led great research on potato selection, on soils, on super-efficient nutrient and water inputs, all sorts of carbon and energy saving processes, some in collaboration with UK universities, notably Aberdeen and Cambridge . . . And said spuds are grown here in the UK — so good for British farming.

The audience, which included a fair sprinkling of top-notch scientists, was impressed and intrigued.

No surprise then to learn Mark is an Agricultural Sustainability Manager.

As I listened to him, though, what was uppermost in my mind, was that all this effort, all this energy, all this research — all this social, intellectual and financial capital was being spent by Pepsico. They own Walkers crisps.

And where, I kept thinking, lie the ethics of all this Pepsico effort? Is it a good use of land, soil, water and energy, however carefully and efficiently used, to grow potatoes to be made into crisps*?

And which is better nutritionally for thee and me, spud or crisp?

Here’s a table giving the nutritional values of both spuds and crisps, along with Public Health England’s advice: 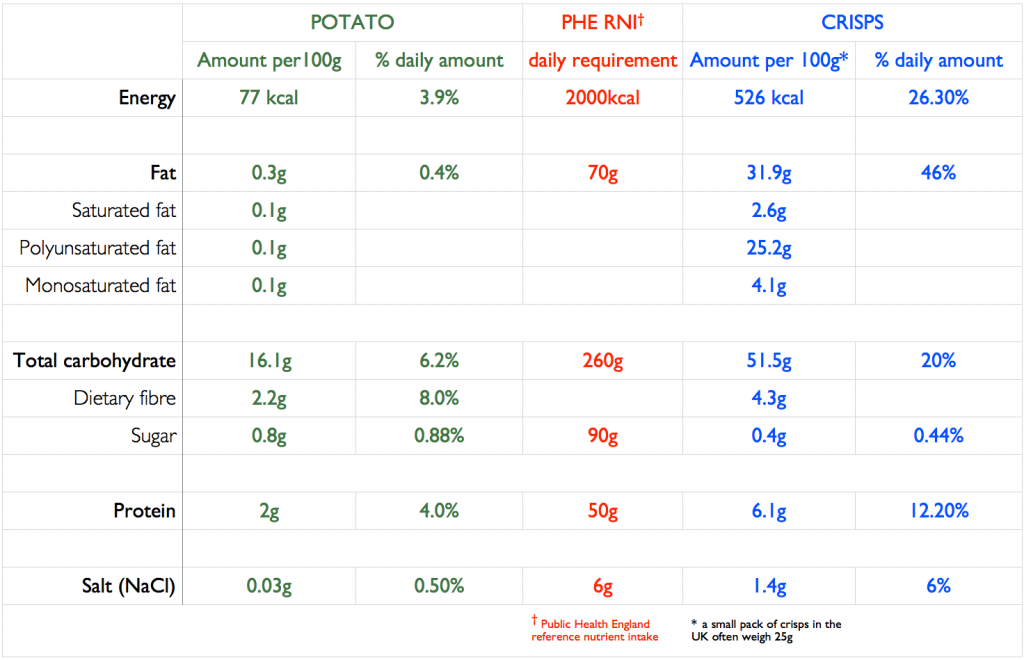 As can be seen, crisps have far more calories per 100g than spuds do. This is because they contain oil; according to a Walkers crisp packet, 26% of the content is sunflower oil — and it also contains rapeseed oil and a lot of salt.

PHE state that any foods that have more than 1.5g salt per 100g is ‘high in salt’ — these crisps are marginally under that threshold according to the label, and no doubt by careful processing design.

So, in terms of global food security, which is a better use of land, soil nutrients, water and energy? Spud or crisp?

It’s not just that the humble potato is better for us in terms of health, it’s also better in terms of food security, too.

*In US English, ‘crisps’ are ‘potato chips’. (And in US English ‘fries’ are what we Brits call ‘chips’, just to be confusing.)