Our food supply network is a complex system. And therefore has certain features which we need to take into account when we think about it, or seek to change it.

So in this blogpost I’m going to talk a tad about complex systems, and use what’s said here as a basis for further blogposts about some of the work we’re doing here to change our food supply network.

First off, it’s worth making the distinction between having an explanation of something, and having an understanding of it. Understanding is usually far from our minds. Rather, we’re satisfied with explanations, many of which miss the point. 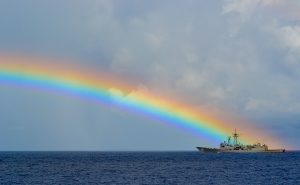 An example: New Optimist Jack Cohen often gave the Lie-To-Children teachers give to eager students whose imaginations have been caught by the splendid beauty of a rainbow. (Raindrops as prisms, eh, let alone such guff in  not even beginning to explain how that lovely great arch appears across the sky!)

To begin to understand a complex system, we need many often mutually exclusive explanations — objets trouves as well as lost property. (As you might imagine, Jack was delighted to find the sign above in a railway station in France — and to find it reflected too. I reproduce it here with his kind permission.)

Humans like stories rather than reality. Our minds often can only ‘see’ a thin line of causality when, in reality, there can be many causes or no causes.

Another useful concept is that of phase space, a technical mathematical term . . . with a longer, but more accessible term, possibility space. Phase space is always much, much bigger than anyone can imagine.

But what is it? Imagine a game of football, the mini-second before kick-off . . . Phase space is all the players’ moves and every motion of the ball that could happen during the whole game. Phase space closes down towards the end of the ‘game’ . . . 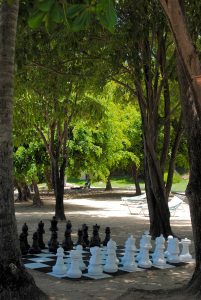 Reality creates many ‘games’, creates infinite phase space for future games, and possible future rules. There is no reason why chess and football should play by the same rules.

Imagine a game of chess in which the players create new tiles upon which new players arrive and play with new rules . . . I repeat: Phase space is always much bigger than anyone can imagine.

New rules, new players. Complex adaptive systems are dynamic. Thus the moment you think you have an understanding, your understanding need change, as the system has changed.Complex systems continuously change; change creates change; hence the paradox quoted in management speak: If things are going to stay the same, things have got to change.

The time to make big changes is when you’re secure, robust, when you have room to manoeuvre. Good strategies result in having more, not fewer choices next time.

Sometimes when one system comes into being, it allows another system to enter the ‘game’ and be parasitic upon it, even ‘killing’ established systems. 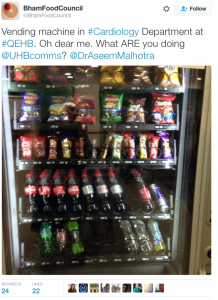 Vending machines in hospitals, schools and work places, for example, allow confectionery and beverages to be sold 24/7 without paying for labour, so raising the profits of confectionery and drinks manufacturers and eliminating other eateries that require labour as well as product costs, and the costs of dealing with waste, refuse or recycling. Given the right conditions (or permissions, in these cases), efficient monocultures take over niches; profit-driven savvy corporations seek such niches.

Efficiency in a system creates fragility; robustness is the only sustainable path.

But in today’s business organisation, all too often efficiency, just-in-time logistics beats robustness by eliminating any slack in the system at the best of times. (Which is why hospitals aim for 85% bed occupancy — because they need slack in their system to cope with sudden shocks — a motorway pile-up, say, or a rogue pathogen affecting a population.)

Here’s an example of super-efficiency — which Sainsbury’s got away with. This time.

The fire at a Sainsbury’s Distribution Centre in London on 8th May 2015 began with a small fire in small unit in a single truck. Although Sainbury’s emergency team was in place via their intranet, and fire engines were on the site within minutes, this tiny incident had an impact across much of the Sainsbury’s logistics system over several weeks. The food stuffs in the Distribution Centre were smoke-ruined, so supplies had to come in from other centres from as far afield as Yorkshire and the Midlands, partly to supply the London depot, and partly to supply the other depots whose stocks were suddenly used up to supply London.

Few, if any customers, were aware of the sudden beginning of changing shifts in their food supply logistics, let alone subsequent changes that went on over weeks. Yet imagine: What if another tiny incident had happened about the same time in another depot that had taken it out of their just-in-time efficient system? Or some as-yet unimagined external disaster wiped out their communications systems for a few hours — or, say, the traffic communications system across a conurbation? 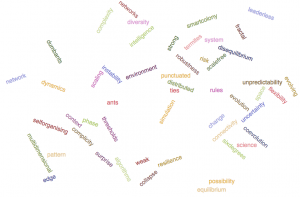 Since the mid-20th century, a growing number of words and phrases have been coined to help us grasp the nature of complex systems. Not just robustness over efficiency, emergent behaviours happen, with no direct cause and effect.

Small worlds and the strength of weak ties —seeing coincidences, depending on the inevitability of six degrees, rather than counting or counting on relationships. So investing in the network, as that always pays off.

See also these few pages I wrote way back in 2005 — it’s an easy read. With pictures too!