What Michael Gove didn’t say in this speech to the Oxford Farming Conference yesterday was far more significant than what he did.

He didn’t say a word about food security.

Yet food shortages, and looming food insecurity can be clearly seen already, even here in the UK.

Fresh’n’veg price hikes & unavailability of some products only last year
There was a fruit and veg price hike late spring last year. Moreover, for a brief time (while wholesalers searched for other sources) cucumbers, avocados and lettuce couldn’t be bought for love nor money. Why? Floods in southern Europe at a critical time, yet another weather event, telling of climate change and far more serious shortages in the future.

Food insecurity already within the UK
The rise in food banks is telling. As is recently published UN FAO data indicates some 8.4M (12%) of adults living in UK households reported having insufficient food.

There may be enough food in the country to feed us all, getting enough, safe, nutritious food to everyone isn’t happening. Will there be enough in the future?

The UK is nowhere near self-sufficient; we import 40% — most from the EU
Currently 40% of what we eat in the UK is imported, nearly all (97%) from the European Union or countries with which the EU has Preferential Trade Agreements (PTAs) or PTAs about to come into force.

Brexit?
Mr Gove stated he was ‘confident of building a new economic partnership with the EU that guarantees tariff-free access for agri-food goods across each other’s [sic] borders’. There is no evidence for this confidence, unless we stay in the single market and the Customs Union.

Distortions in the system
This drive to add processing levels — and therefore higher profits leads to distortions to the system; e.g.

Zero and low nutritional foods
Food and drink is zero-rated, unless it has zero or low nutritional value. The categories (dating from Purchase Tax, introduced during World War II) are most drinks (excluding milk of course), savoury snacks such as crisps, biscuits (not cakes or pastries, as they couldn’t be manufactured then) and confectionery.

Our analysis of Defra stats shows that 30% of UK household food spend is on VAT-rated products, with a further 4% on cakes and pastries.

And what are short-term consequences of having a third of the system producing low-value (if profitable) products?

The full text of Michael Gove’s speech is here. It was also recorded, and you can watch it on YouTube: 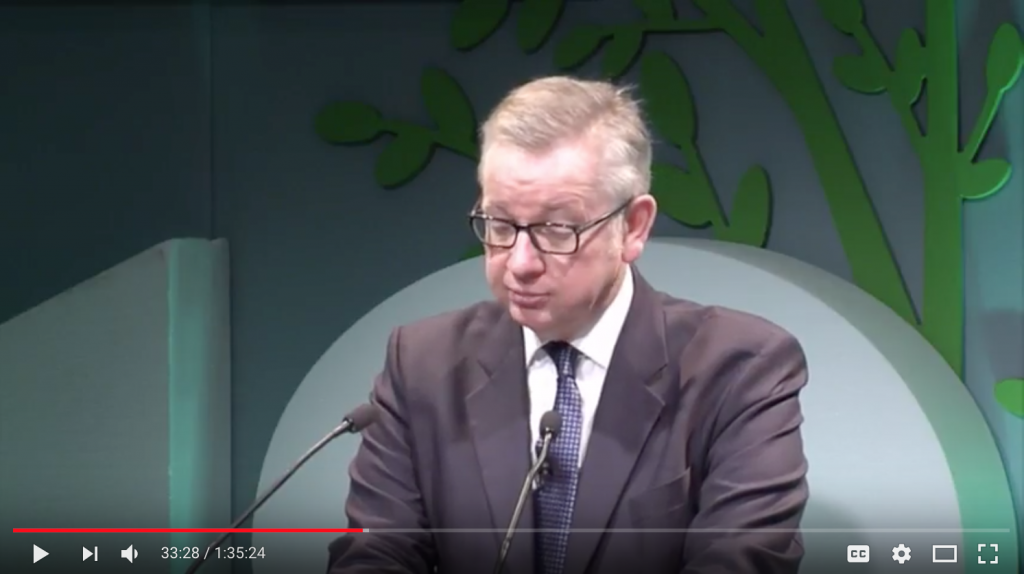 Our compilation of papers, reports et al on Brexit and the food system is here.