Why aren’t we tackling the potentially catastrophic threats to our food system?

That was the question Professor Sir Andy Haines and his research team asked themselves. They were working for the prestigious Rockefeller Foundation-Lancet Commission on Planetary Health.

They wrote this BMJ paper based on their work Future earth — linking research on health and sustainability.

I based a recent blogpost Challenging governance and structural power on their paper, and described key elements of it.

But what I didn’t describe was the conversations I had with Andy about the biggest wedge being about governance and vested interests in this info-diagram in the blogpost: 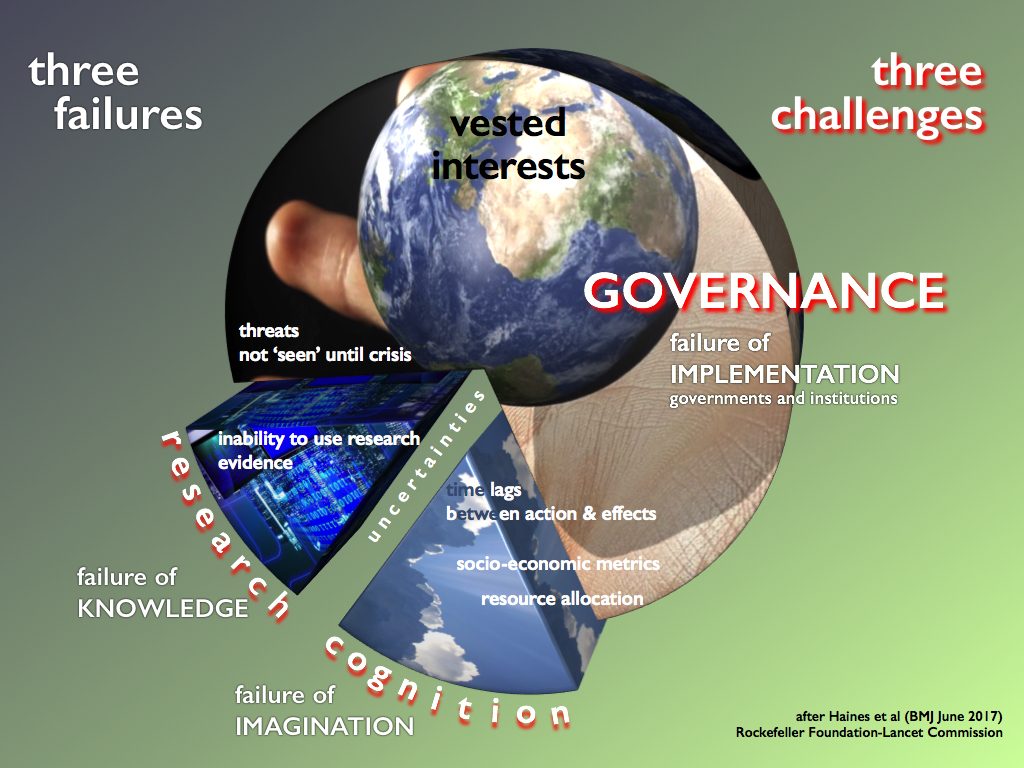 I changed the weighting of the three failures and three challenges Andy and his colleagues wrote about. In the article, they just followed each other.

For us, however, the challenges of governance, the failure of implementation is by far and away the most significant of the challenges — hence it’s the biggest wedge by far in the pi-chart.

Before I made it public, I called Andy, explained what I’d created, and why. And asked him if he’d critique it, suggest amendments. Or, indeed, if he thought I’d got it wrong, I’d trash the whole thing.

I didn’t hear from him for several weeks. But, out of the blue, he called me. He did have some minor changes he thought should be made (the diagram is now better for them), was happy with the weighting I’d given, and asked for a copy of this final version.

Vested interests are overwhelmingly the reason why humanity is hamstrung in doing anything significant.

So who and what are these vested interests? Follow the money.

It is not just the costs of the dietary impacts of their products are so cripplingly huge, which they are. Nor is it the debilitating impact, both physically and psychologically on the billions affected, significant though they are. Nor the massive costs of recycling or otherwise disposing of the packaging on their products (132M cans/bottles from Coca Cola in Birmingham alone).

In my next blogpost, I’ll illustrate how these vested interests are achieving their aims, and so thwarting humanity’s efforts to tackle the potentially catastrophic challenges we’re facing. And what we need to do about it.