Our Response to the draft London Food strategy is in the public domain. Its focus, though, is not for the general public specifically, but for socio-political decision makers, here being Sadiq Kahn and his colleagues at London City Hall.

We think it’s unlikely he and his colleagues understand the possible scenarios of food scarcities and shortages that will be facing him and other civic leaders all too soon.

No-one talks openly about such scenarios. Why not? Information about them are in many places; see, for example, the endnotes in our Response on on pp9-12.

So why aren’t plausible scenarios about food scarcities and shortages planned for or even talked about by our civic leaders?

Some believe a too apocalyptical a message will be ignored. That it renders people incapable of action.

Indeed, there’s a fine line to draw, as Caroline Hutton so eloquently described it in a blogpost: “the narrow space between complacency and terror and despair“.

The challenge with that approach is that when events tumble down on a population, they will be ill-prepared to respond and, more dangerously, will blame civic leaders and governments for the situation they find themselves in.

Civic leaders need to understand the likelihood of events which will range from inconvenient (such as the shortages of cucumbers, courgettes and other veg in the summer of 2017) to the downright dangerous because of, say, sudden shortages of staple food either here or overseas.

Or more insidiously, the danger from a population drip-fed, without warning of absolute shortages of different day-to-day food-stuffs (which look highly likely again this year), coupled with extreme weather events, such as the flooding and the cold of this spring, and the drought and heatwave through June and now into July.

And there’s danger from something happening in a different system: Who’d have thought a couple of months back, that a CO2 shortage would lead to food and beverage shortages? (Some in the industry would. We didn’t see it and I suspect most didn’t either.)

Business as usual is not an option. Unless civic leaders face up to the forces threatening our food supply system, including facing down current vested interests in today’s system, then an apocalyptical future for many millions more people becomes inevitable.

And those ‘many millions’ might include us, here in the UK.

Radical change will be trust upon us. And civic leaders like Sadiq Khan are needed to lead on the transition to difficult times ahead.

How can they do so when they don’t know what’s likely to happen, even in the near future?

An aside: When Mark Rogers, former Chief Executive of Birmingham City Council, joined our Board, I briefed him on these matters, basing it on our horizon scanning report Back from the Future.

He didn’t know what we might well be facing, and facing soon. He’s well up on emergency planning, as you’d expect from a former Local Authority CEO. But this . . . No, it didn’t know. He knew bits of it. Who hasn’t heard of climate change? Who doesn’t know about global population growth?

But impact of the associated competitive pressures on increasingly depleted resource? No. And why should he have done?

For no-one talks about it. Not even those in charge of our infrastructure system.

Here’s a tweet from Professor Tim Benton giving an answer to our question about whether the food supply network should have been covered in the National Infrastructure Commission Assessment Report published last week: 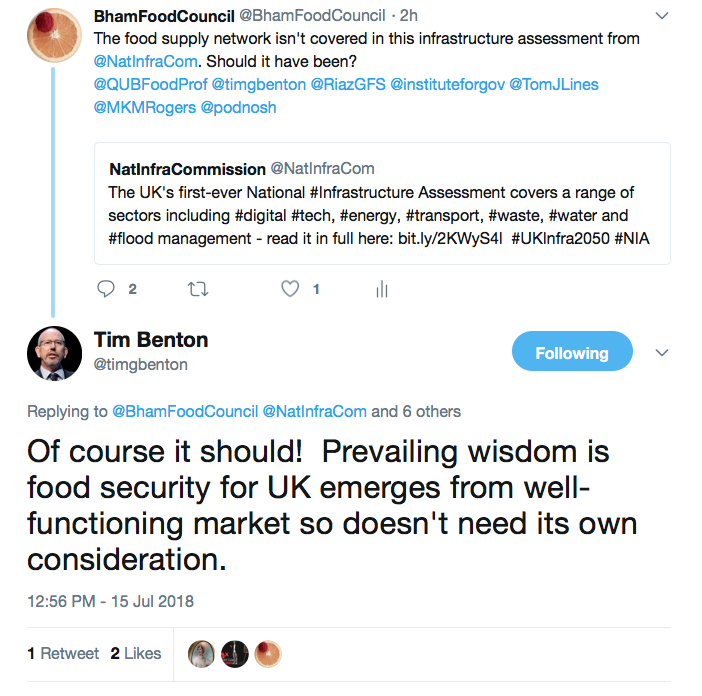 A market, whether well-functioning or not (and we argue it’s currently skewed by powerful vested interests), ain’t going to work under the looming threats to our food system from climate change, resource, depletion and population pressures. And we can already see some of these threats playing out, both within the food network and the wider political arena.

note: The words in the image at the top of the page are from T S Eliot’s Burnt Norton.