“How can you bear to spend so much time thinking about it all?” my friend Anne asked. “You have grandchildren.”

The conversation I’d been having with Anne was about our new video (see below) which gives a deeply concerning, more than a tad scary and depressing picture of the future.

Anne’s question is one that needs a thoughtful answer. How do I, or more importantly, how does anyone think about it all? As soon we will, whether we want to or not.

And then I realised that the three reasons I gave to Anne would make a fitting introduction to the event we ran last Thursday, an iteration of five different scenarios of The Game running simultaneously. 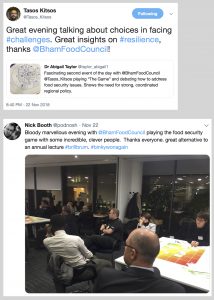 My three reasons are: optimism, reality and context.

Optimism: As luck has it, I am a natural optimist, a fundamentally happy, outgoing soul.

Optimism as a strategy or a tactic, though, is away with the fairies, irrelevant, futile. Nonetheless, as a stance in the creation of a strategy, it helps. A lot.

My second reason: Reality. I’ve been criticised, by Tim Benton no less among others, for saying it as it is. You mustn’t do that, Kate, they say. People will switch off, do nothing.

Reality: Think back to my earlier words: How does anyone think about it all? As soon we will whether we want to or not.

Imagine yourself in front of a medic, and she’s about to put you through an essential but painful procedure. Will it hurt? you ask. And she replies: No, no, you mustn’t think like that. Be optimistic! You won’t feel a thing . . .  And then the agony happens.

Medics know that if you’re prepared for pain and its management, you will respond better. (They also know they lie to you, you’ll never trust them again.) What medics do is change the context of their intervention, psychologically and/or physically.

So to my third point: Context.

We spend a fair bit of our time thinking about how to enable intelligent responses to the global challenges we’re facing.

They’re huge and many, they’re on scales our senses don’t naturally compute, there’s lots of ’em and they conflict, there are powerful vested interests in the status quo, all the sorts of stuff our cognition has problems in comprehending. 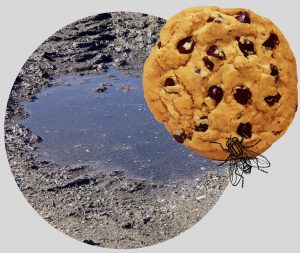 Of course, humanity is floundering, drowning in it all.

All critters have intelligence. They need it to survive, as we do. Here’s an image for your mind . . .

Intelligent behaviours are as much about context as they are about brainpower.

(Context, by the by, is even more important for us humans than it is for a fly or, indeed, any other living thing. This is because, for us, much more of our behaviour is stored in our brains, and not in our genes. (And is why it takes a couple of decades of intensive work to “programme” a newborn to be an independent adult.) Yet more of our behaviour and nearly all of our ‘intelligence’ is what Ian Stewart and Jack Cohen coined extelligence; that is, intelligence stored in the world not our brains.)

The Game as context
What The Game does is provide a different context for our intelligence. And . . . I stretched the metaphor to suggest to everyone gathered to play it t’other  day that The Game lifts the Players out of the Puddle of Reality and places them carefully (to dance) on the Biscuit of Opportunity.

For those of you who’d like to watch the video now, here it is:

note: The image at the top of the page, which also features in the video, is of the Famine Memorial, Dublin by Ron Cogswell.