I asked the two workshop participants who’d drawn up the original of the e-version of the supply chain map for their comments on it.

One of them, an operations director of a large fresh produce wholesaler, emailed this me: the map covers most scenarios but assumes a lot of produce goes loose to multiple retail outlets. But the food service sector is also huge, adding that the permutations (and so added value) and the kinds of intermediaries are endless. 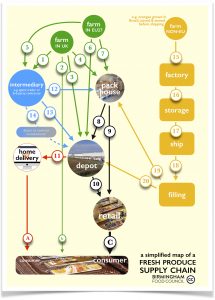 Another route shown simply in the map with the dotted blue line (#14 on the map, right) is that the produce goes to a manufacturer; e.g. making meals, or potatoes to crisp manufacturing, produce for juicing, or to sandwich-makers and then into food service supply such as restaurants, Subway, Pret or Pizza Hut, McDonalds, also to school meals, hospitals and other catering outlets.

Added value for fresh produce can be all or any of the following: ripening and packing, packing from loose produce, portioning, consolidating produce, part cooking, dicing . . .

From an “intermediary”, an agent, a trader or some third-party contractor, the product can also go to a distributor or another intermediary  . . . and ultimately to a food service outlet instead of a retail supermarket. (With small margins along the supply chain, plus increasing awareness of threats to supplies, there are a host of different relationships within the chain. Hence the word “intermediary” covers a lot.)

In terms of mergers and acquisitions (M&A), intermediaries tend to vertically integrate with other businesses over time to such an extent that they perhaps own the depot and the pack house in addition to having key relationships with farms. Indeed, on a few occasions, there has been such a desire to secure the supply chain that some intermediary businesses enter into commercial joint ventures with farms to share profits that they make lower down the supply chain.

And some supermarkets have their own manufacturing at depot, and will further distribute to another depot. Also, some of the produce is re-exported, either within the EU or beyond.

Another important point to make about the food supply chain is about the high barriers to entry. It takes serious capital investment (buildings, equipment, machinery, labour), and organisational capability to be a player in this socio-economic system with its tight margins and the perishability of the product at the farm gate.

A penultimate point made here about the food supply chain is that there are a whole host of professionals involved in the food system who don’t play a direct part in getting the meal to your mouth but are, nonetheless very important to making it all happen. Way back in 2015 when we published our second report on food and the city economy in Birmingham, we categorised the kinds of expertise and activities into four groups: producers, multipliers, controllers and consumersand called this categorisation the PMCC Framework,  also replicated below.

The final point is this: Everyone of these people are making trade-off decisions — the ethics of all that is outlined later in this series: blogpost #19: Rights, responsibilities, principles and an elephant.