Look again at the simplified supply chain map in this blogpost, also replicated below, and imagine three scenarios:


The first about an imagined future, one in which there is a hard Brexit: 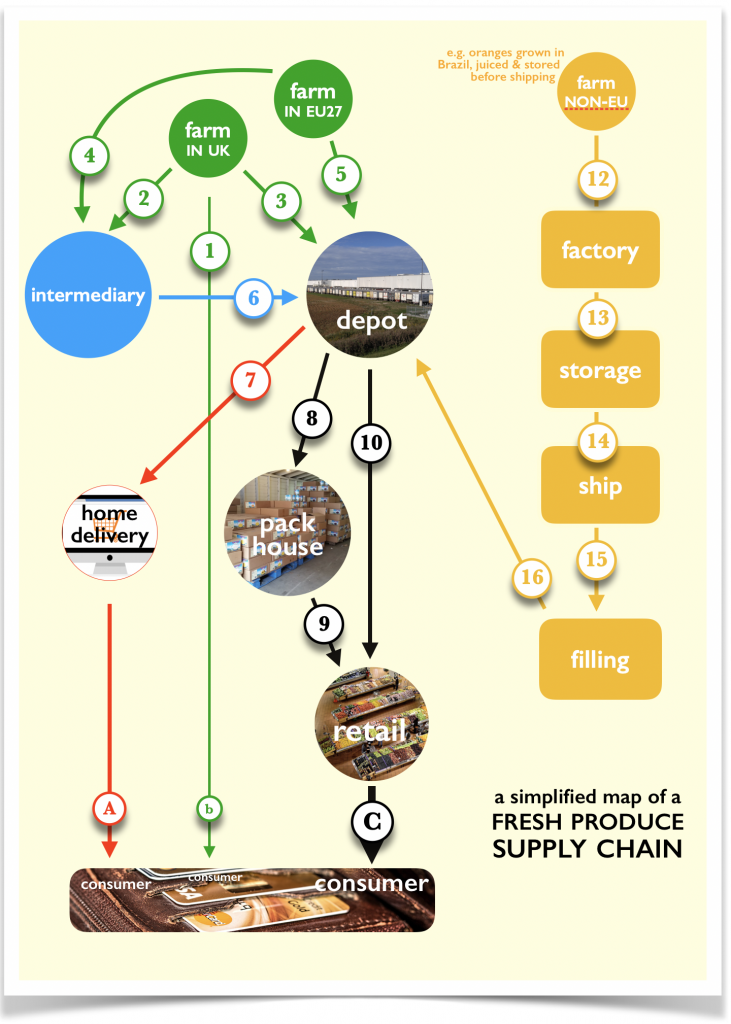 The next two scenarios are about events that have happened, and what-ifs concerning them:

Scenario A: Fire in a Sainsbury’s chill food distribution centre
Remember the existence of  “permutations” to the system outlined in this blogpost while you read the story:

The event itself provides an impressive example of adaptive, just-it-time super-efficiency by Sainsbury’s in 2015, when faced with a potential disaster. The company exhibited impressive, really impressive organisational capability.

They got away with it. That time.

The fire at a Sainsbury’s Distribution Centre (a “depot” in the map above) in London on 8th May 2015 began with a small fire in small unit in a single truck. Although Sainbury’s emergency team was in place via their intranet, and fire engines were on the site within minutes, this tiny incident had an impact across much of the Sainsbury’s logistics system over several weeks.

The chill food stuffs in the Distribution Centre were smoke-ruined, so supplies had to come in from other centres from as far afield as Yorkshire and the Midlands, partly to supply the London depot, and partly to supply the other depots whose stocks were suddenly used up to supply London.

Few, if any customers, were aware of the sudden beginning of changing shifts in their food supply logistics, let alone subsequent changes that went on over weeks.

Scenario B: CO2 . . . Who’d have thought it?
In any complex system, tiny events can have big repercussions (sometimes called the butterfly effect). As happened in June 2018. The story of CO2 crisis, told in The Grocer in June 2018 — the article also goes into why there was a CO2 shortage, gases manufacture and distribution being another complex system.

It first hit the news because a poultry farm in Northern Ireland couldn’t send their chickens for slaughter. CO2 is used to stun the bird before its killed, the stunning a necessary part of due regulatory process. To compound the situation, the birds are too big for market within roughly 48 hours. Who’d have thought the shortage of CO2 would have this effect? (The Grocer article explains why there was a shortage.

And lo and behold, COs is necessary for all sorts across processes in the food chain.

Including the production of carbonated drinks. Who’d have thought that?

Well, not a boss of a fizzy drinks firm. Yup, you’d have thought, though, he’d have noticed the clue in the word ‘carbonated’. Or the bubbles . . . never underestimate the propensity for the human mind to be unconscious of the utterly familiar, the everyday, even what is, to an outsider, the blindingly obvious.

Just as the permutations to the food supply chain are “endless”, so too are the locations where risks are. Nor these scenarios take into account the threats to our food supply system associated with climate change, resource depletion, population pressures  or our increasingly volatile geopolitics (see earlier blogposts in this series below).