The zoo-keeper thought she’d locked all the chimpanzees outside. She hadn’t. One young male, in sight of us visitors, had hidden himself from her. He looked straight at us, I’ll swear he grinned.

She walked inside the chimp house, her arms full of boxes of fruit, lots of it, which she scattered around.

The youngster bided his time. The moment she left him alone, he dashed quickly around to pick up as many plums as his hands could hold. He looked at us again, gleefully, as the zoo-keeper left the house before opening the doors for all the chimps to come back in from outside.

Plums, we visitors learned, can be bartered for sexual favours.

Is there such a thing as a free lunch?

We humans, as well as those chimps, follow ‘rules’ about exchanges; we have an intuitive sense of what’s fair, what should be done, how you and I should behave towards one another.

Social scientists have explored what these ‘rules’ are.

Their work gives us useful thinking tools when it comes to the ethics of food distribution whether among, for example, colony birds and insects, or highly socialised primates such as chimpanzees and us lot, homo sapiens with all the specific rights and responsibilities we think about for human individuals, our social groupings, our species as a whole.

An aside: It’s not surprising that living creatures have evolved behaviours about food supplies. After all, their lives depend on getting energy and nutrients. Matters are especially acute when, as with a specific meal, it’s a zero-sum game; that is, if you scoff the only one there, no-one else gets a look-in.

For most of us most of the time, food costs money or, sometimes hard graft such as on an allotment. If you do get a “free” lunch bought for you by a friend, s/he will expect something in return, maybe you footing the bill next time.

When considering a food system within, say, a city, notions are more difficult; individuals can let things slide. It can be hard to remember who paid last time out together if a while ago. (Though easy to remember the person who rarely if ever stands a round. As many other living creatures, it seems we’re wired to recognise cheaters in the system.)

Take, for example, the nature of food emergency systems like food banks. In these circumstances, usual social norms about money exchange reciprocity, are often aborted. Hence the feelings and perceptions of the various players in the system are likely to be very different from those they feel and perceive in a more equal monetary exchange. 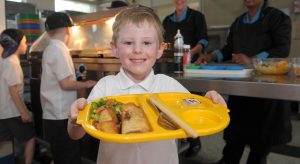 Yet it’s socially acceptable for patients in NHS hospitals to be given food. Social rites of passage such as birthdays, weddings and funerals,  typically involve free meals for guests.

In contrast, although few would disagree with the notion of free school dinners, children and parents often feel social stigma in accepting them. (Although not, predictably, when  it is  a universal right, as is in state schools across the UK for particular age groups.)

Perhaps there’s something similar going on with the reluctance of many to use food banks; some 70% of people who need food aid are loathe to go to one.

Yet in strictly economic terms, this just doesn’t make sense. You’re given food at a food bank or a free school dinner. Why the reluctance in accepting free food in some social situations but not in others? What’s going on in our heads about the nature of these exchanges? Is there, indeed, such a thing as a ‘free lunch’?

Will you give me a free lunch? I’ll say please. And thank you. For the next month or two?

Under what circumstances and social settings would you give anyone, someone, a free lunch and, if so for how many days, months, years?

Why do we think some exchanges are OK, and others not?

Building on work in game theory, experimental economists have devised a series of ‘games’ to measure reciprocity, altruism and fairness; i.e. what people think about the ethics of the social exchanges they make.

As many others, I’ve ‘played’ these games in business settings. Professional negotiators understand them intuitively if not through training.

They are useful way of ‘parsing’ our social world.

The most well-known of these games is probably the Prisoner’s Dilemma. There are others, such as  the Public Goods Game and the Trust Game and the following two outlined below.

The first of these is the Ultimatum Game. The second is called the Dictator Game, which adds an intriguingly powerful variant to the first one:

The Ultimatum Game
A person, the ‘proposer’, is given a sum of money arbitrarily (or any other good), then asked to offer some of it to another person. The second person, the ‘responder’ chooses whether or not to accept the offer. If they reject it, they receive nothing.

The psychologist Daniel Kahneman (who won the 2002 Nobel Prize in economics), devised the variant of the Ultimatum Game: The responder cannot reject the offer being made; i.e. the proposer dictates.

Observations from just these two ‘Games’ are:

To return to the chimpanzees:

Do chimpanzees have rights? For example, rights to food? Rights regarding their social lives, including sexual relationships?

If so, are they the same in a zoo as in the wild? And whose responsibility is it to monitor, perhaps enforce those rights? Do we, another primate specie, have rights and responsibilities regarding our relationships with chimpanzees? (Or, for that matter, other species?)

In the next blogpost, I’m going to enter, carefully, into the minefield of human rights and responsibilities within the food system.

#15: Drug foods and their specific risks to the food supply system