The global competition for the food to keep us all alive is intense, and increasingly so.

Eating the last coveted apple in the family fruit bowl can lead to a fraught argument in a household.

At a population level, though, the deliberations and decisions are qualitatively, dramatically more difficult. Here’s one reason why:

We’re told we should each eat five portions of fruit’n’veg a day. Five times the number of portions means the challenge of getting them all to each of us in the UK shifts the calculation into a new mathematical gear, it’s n-times bigger.

The ‘n-times bigger‘  points to the real-world challenges to ethical decision-making. It’s not only an issue of scale, mind-boggling though the stats are just for five-a-day for the UK population, let alone for the billions now living on Planet A.

So deciding on the trade-offs at a population  level can affect millions, if not billions of people. Moreover, each decision has unintended as well as intended consequences.

Nonetheless, decisions — or decisions not to take decisions are made. Necessarily made by every one of us every day.

Alas, there is no one size fits all. When faced with an issue, though, we can put on (as it were) an ‘ethical lens’. What’s the nature of the ‘lens’? Do you, should you ‘wear’ them all the time? If not, in what contexts should they be ‘worn’ and by whom  on your behalf? 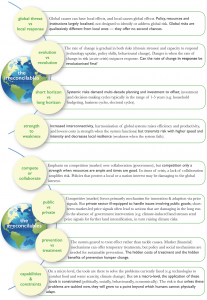 An intuitive feel, however well-honed through the millennia of our ancestral past, will not cut this mustard.

Think, for example, how the ‘irreconcilables’ of an earlier blogpost pan out in the real world (info-diagram replicated right) and how we might balance them in any real world dilemma.

Ethical principles
In any discussion about ethical decision-making, it’s worth turning to those in the medical field for guidance about the principles upon which they’re made in a medical context.

Professionals in the medical context make life-or-death decisions, in some settings such as an A&E department, making them, routinely, every day. Medical decision-making and the relationship between professional and patient has therefore been debated and discussed for centuries, and is an important part of most medical training.

The standard textbook on the matter is Principles of Biomedical Ethics, written by two US  profs, now both retired, Tom Beauchamp and James L Childress, first published in 1979 and now in its 8th edition.

Beauchamp and Childress put forward Four Principles, which provide a useful framework about ethics in any context. They are:

Ethical principles within a context of the food system
The info-graphic below is one context (of an infinite number) to think about the ethical principles upon which decisions are made about food supplies. It represents big-picture stuff.

Scroll down for an explanation of the three elements (1, 2 and 3) and the three forces on the system (A, B and C): 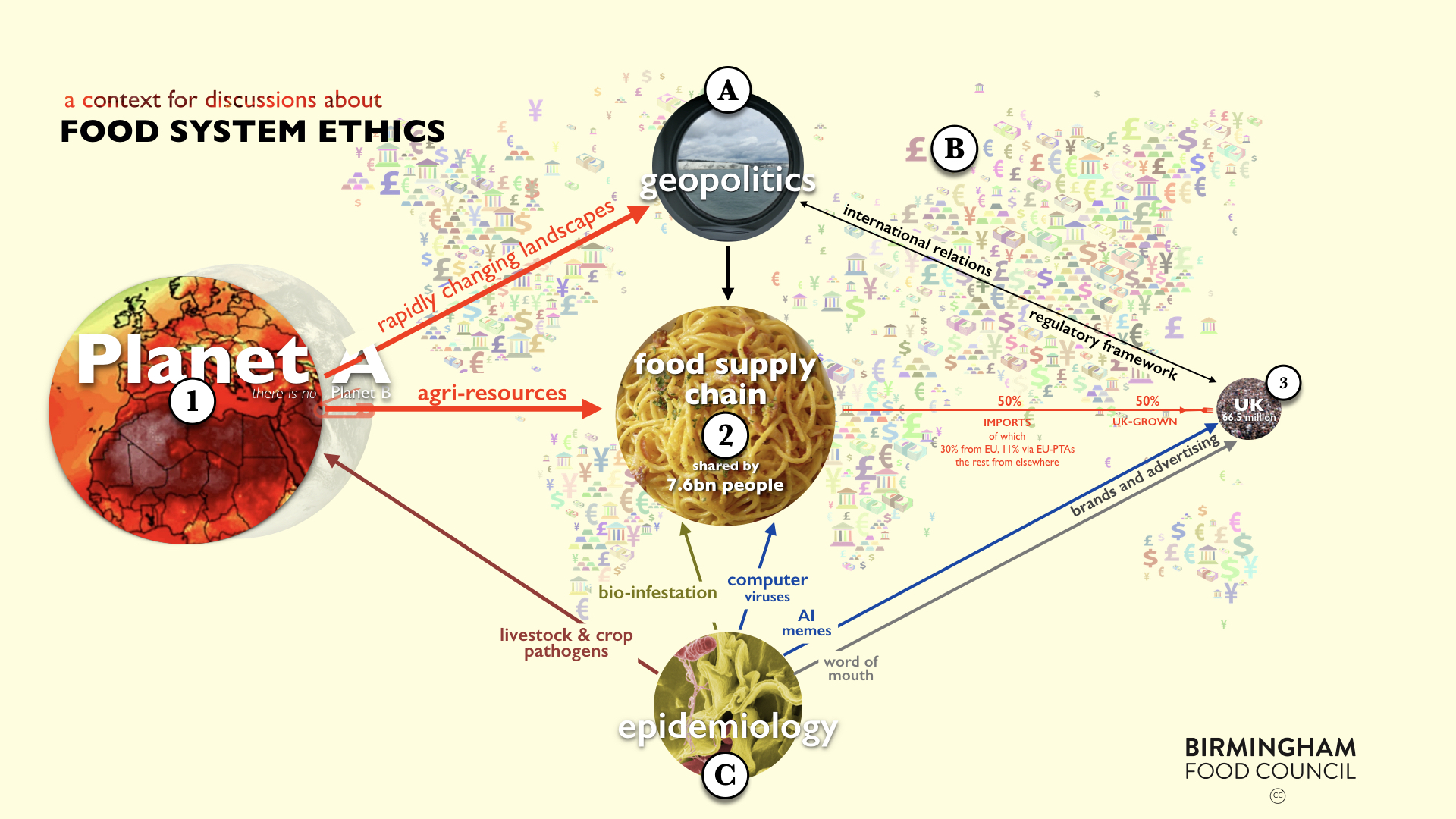 (1): Planet A  and its natural resources of land, soils, water and energy. They are all threatened; see #6: UK resilience to global risks to food supplies. (The slightly faded image of the safety pin a reminder, in the unlikely event that you should need it, that there is no Planet B.)

(2): The supply chain, outlined in earlier blogposts here and here. It’s shared by 7.6bn other people, plus domesticated and wild animals, plus zillions of other creatures and living things.

(B): Money, including financial and fiscal systems.
Everywhere. A factor in all decisions.

(C): Epidemiology
Why include epidemiology?
First, it’s a reasonably well-understood dynamic system. Professional statisticians can predict probabilities of all sorts from traffic jams to the impact on hospital beds of a flu outbreak.
Secondly, the epidemiology of viral or microbial infestation is a serious threat to our food supply system, as outlined on page 9 of our 2018 Report, Global Risks to UK Food Supplies.
Thirdly, the just-in-time (JIT) logistics that gets food from farm to populations depends on vast computing power; a virus getting into a mainframe, whether by accident or malicious design, could wreak potentially catastrophic damage.
Lastly, epidemiological dynamics also spread memes/ideas within the heads of us all; at a mass population level, this has significant effects on the system itself.

(*a link to an outline of these dynamics below)

And, leading on from blogpost #15:

The Four Principles and food system ethics?
How do Beauchamp and Childress’ Four Principles work when applied to the ethical dilemmas inherent to answering the questions above?

They’re necessary but unlikely to be sufficient in areas where there are large competing components touching the system multiple times in multiple ways at multiple levels. The nature of food system dilemmas are vaster and more complicated than anything the General Medical Council or the Courts might consider about medical practice and practitioners.

The elephant in the room 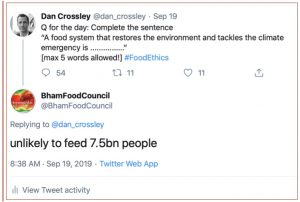 In the screengrab (right) Dan Crossley, the CEO of the Food Ethics Council, asked this question for the day on twitter: Complete the sentence “A food system that restores the environment and tackles the climate change emergency is . . .”

We have to find a practical answer.

A practical answer to some big numbers
The FAO estimate that, by 2025 (less than six years away), 1.8bn people will be living in regions with absolute water scarcity, with two thirds of the world’s 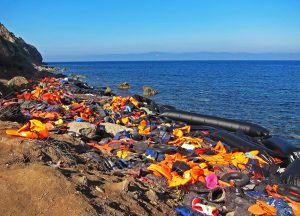 population living in water-stressed regions — as millions of people in the south east of England are already.

I’m a post-War baby-boomer, one of the lucky generation. In my lifetime, the UK population has risen by about a third. I notice it. Queues. Crowds. Tarmac. Endless processes and procedures to go through for this and that. (Food’s better, though, much better.)

Meanwhile, the global population has increased by over 300%. And set to rise by another 2.5 billion or so more  — that additional number, remember, is equal to the total number of people on Planet A when I was an infant.

That pesky question yet again: What are we going to do, and do here in the UK?

The decisions we take affect the rest of humanity as well as ourselves on these misty isles. And herds of decidedly non-metaphorical elephants. And chimpanzees.  And bees.

More fundamentally: How are we going to decide what to do?

The subject of our next blogpost is what we recommend the National Food Strategy does to answer that question.

*And here it is:
There’s outline info + links to more about the fascinating dynamics of epidemiology, including the spread of ideas,  in this April 2005 edition of Sources for the then Innovation Lab at the Warwick Manufacturing Group.

#18: The price of plums and other social exchanges

#15: Drug foods and their specific risks to the food supply system