Our understanding of what’s ‘natural’ is often skewed. Take, for example, John Clift’s photo of Shropshire Spring above.

How ‘natural’ a setting do you see in this photograph of the view south-east from the Cliffe?

Oilseed rape didn’t feature much in any of those earlier times. UK production went from a few thousand tonnes in the 1970s to a couple of million in a good year today (this year, by the by, being the smallest yield since 2004-5).

The last blogpost had this title: The natural environment cannot be “restored”. This one goes on to say there’s not a lot, if anything, “natural’ about it anyway.

If, that is, you think of ‘natural’ as being unaffected by humans. In these terms, there isn’t a ‘natural’ landscape anywhere in the UK. Everywhere you go, you can see evidence of human activity.

Imagine if humans suddenly did a dinosaur-like disappearing act and other organisms took over our towns and cities, roads, railways, airports, beaches, seas and all the farms and livestock along with pathogens and and other critters dependent on our existence.

All the possible futures for every organism would start from a radically different environment from that of, let’s say  . . . around 1600.

How much of the planet’s surface is wild?
Not much. 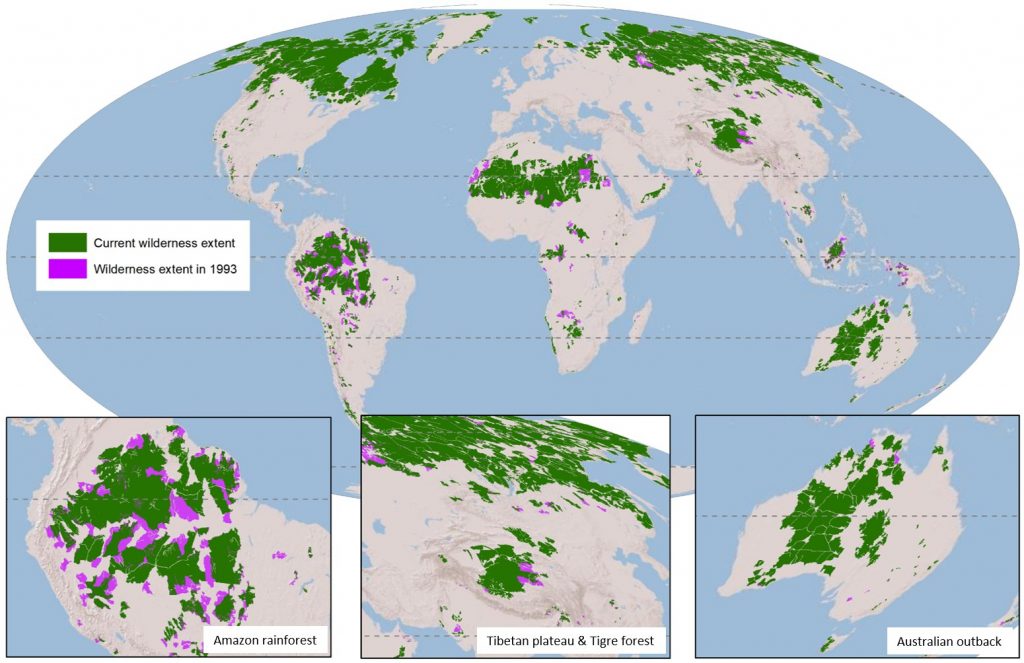 What’s different about humans compared to another organisms is the scale and scope of our use of the world’s resources.

We’ve thrived on these resources, finding living niches all over the globe. Evidence of our success is our dramatically successful breeding.

The 7.6 billion of us alive today, or our detritus, are spread literally just about everywhere.

Note, too, that much of the wilderness areas shown on the redditMapPorn maps (above) are either too hot or too cold to support agriculture. (An exception like the Amazon rainforest is, from a global perspective, better left for carbon sequestration.)

That’s not to say any of this ‘wilderness’ has been unaffected by us. It has been. Moreover, we’re encroaching on what little (comparative) wilderness there is.

These maps relate to the research by James Allan at the University of Queensland; see Temporally inter-comparable maps of terrestrial wilderness and the Last of the Wild (2017). In their abstract, Allan and his co-authors point out that despite their importance, wilderness areas are being rapidly eroded in extent and fragmented.

A quick’n’dirty stock-take.  Literally stock. Livestock.
The dominance of livestock farming on the world’s eco-system is illustrated in this infographic by former NASA roboticist, Randall Munroe. Notice this is about mammals only. 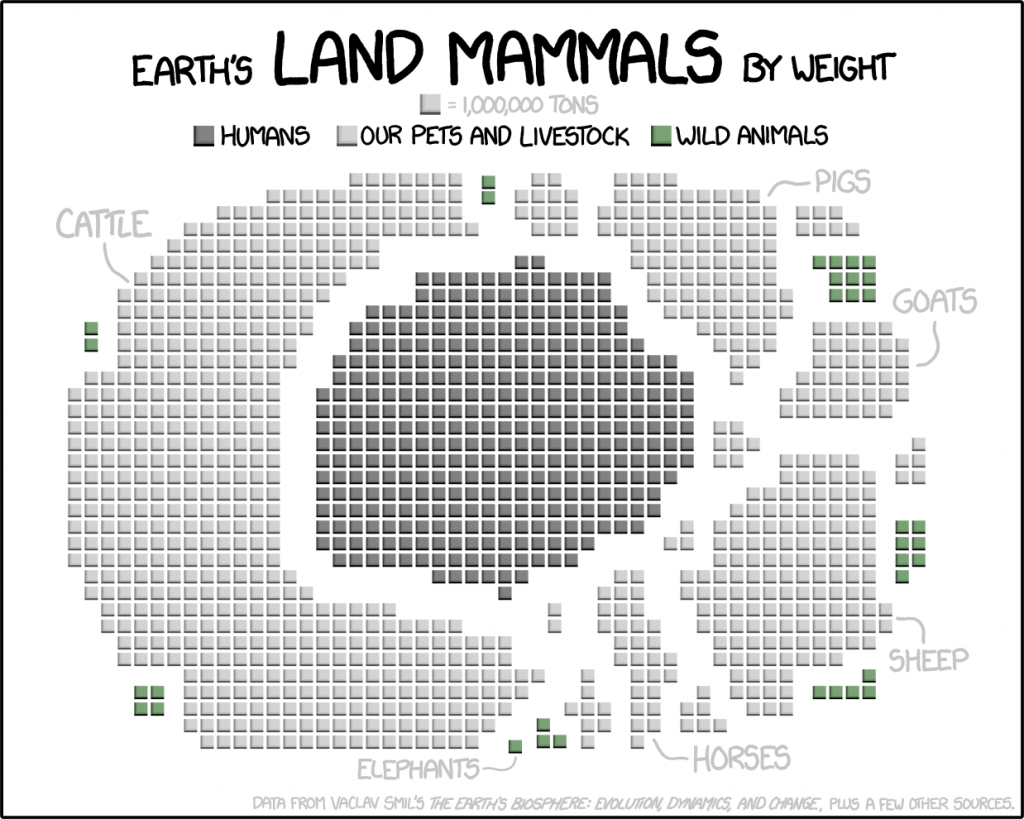 Calculating the number of wild birds is an elusive game. Bird Life International’s latest State of the World’s Birds (2018), however, has a depressing picture of accelerating losses of bird numbers, and an increasing number of species under threat of extinction.

When did this human domination over the world’s ‘natural’ resources take off?
In the previous blogpost, The natural environment cannot be “restored”,  I mentioned the year 1600.  What follows is an explanation why and how our geo-physical world changed irreversibly around 1600 and, possibly, catastrophically so.

Possibly catastrophically for us, that is. The planet will do just fine.

I’ve recently read two highly readable, fascinating books from two different disciplines (earth science and anthropology respectively) the first citing the 16th century (i.e. the decades leading up to 1600), and the second citing ‘about 1600’ as the time when Everything Changed.

1  The Anthropocene
The first book was The Human Planet: How we created the Anthropocene by Simon Lewis and Mark Maslin. They argue in Chapter 10 How we became a force of nature:

“The modern world birthed this new epoch [the Anthropocene] starting some 500 years ago, as global trade and new ideas swept the world. It was reinforced 200 years ago by the shift to fossil fuels during the Industrial Revolution, and then accelerated following a new wave of high-production and high consumption globalization after the Second World War.”

(See also: their 2015 Nature article Defining the Anthropocene, and this 2018 Nature review of their book which challenges some of their argument.)

The impact on the geological record was, as Lewis and Maslin point out, the impact of European disease on the Americas, wiping out millions of people. (Chapter 8: Globalization 1.0, The Modern World).

“The arrival of Europeans in the Americas probably killed about 10% of all humans on the planet over the period 1493 to 1650, with the diseases of farming decisively helping Europeans colonize North and South America . . . the Columbian Exchange [as in Christopher Columbus] transformed farming and human diets. This change is often so culturally ingrained [now there’s a metaphor!] that we take it for granted . . . It’s difficult to conceive that in Europe there were no potatoes or tomatoes before the sixteenth century; in the Americas no wheat or bananas; no chilli peppers in China or Indian; and no peanuts in Africa. The transformation of diets was near-total: even deep in the Congo rainforest, the staple is cassava, a plant originally from South America, while deep in the Amazon rainforest the Yanomani eat plantains that were domesticated in Africa . . . the Columbian Exchange allowed more people to live off the alnd. these newly available plants and animals led to the single largest improvement in farm productivity since the original agricultural revolution. The results of different peoples’ efforts were now available and being adopted world-wide. A single globalized farming culture was born.

2  The ‘barbarians’ lose out against the grain 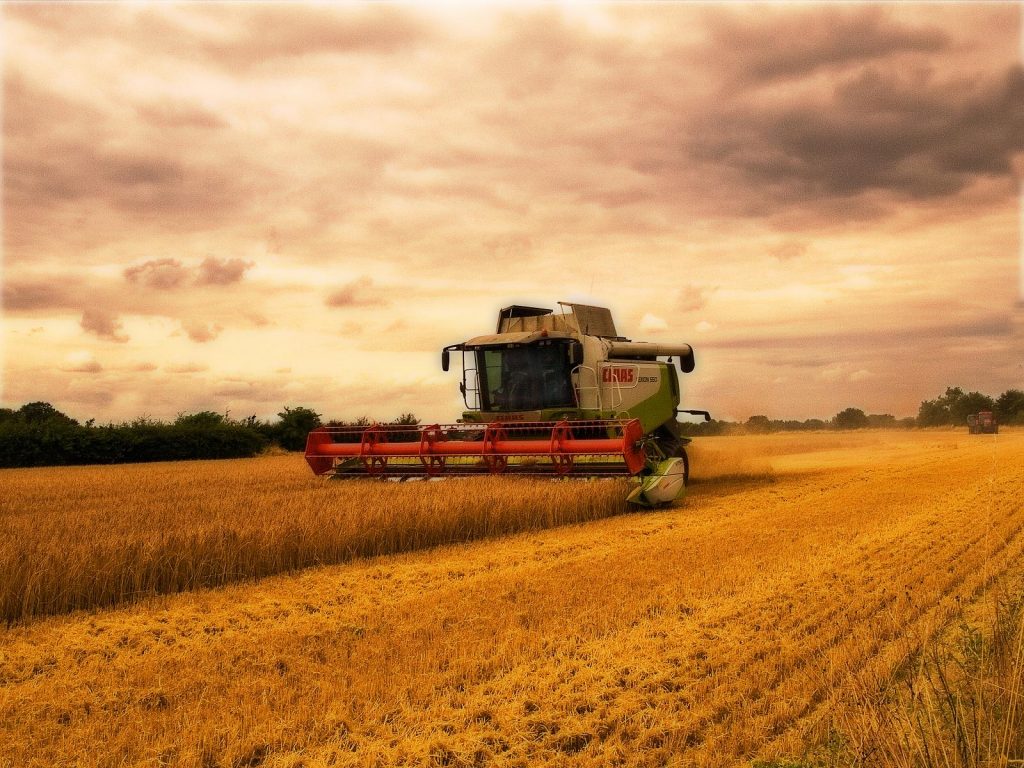 The word ‘barbarian’ is pejorative. A barbarian is uncivilised, wild. Yes. But . . .

James C Scott uses the term in a neatly-titled book, Against the Grain. (If you haven’t read this riveting book, this Guardian review is useful, as is this LSE Review too.)

He uses the term thus:  in an ironic, tongue-in-cheek sense. “Barbarian” and its many cousins _ “savage”, “wild”, “raw”, “forest people”, “hill people” — are terms invented in state centers to describe and stigmatize those who had not yet become state subjects . . . I use the term “barbarian”, it is merely an ironic shorthand for “nonstate peoples”. (page 221-2)

(One of the many nuggets I took away from his book is the origin of the word ‘barbarian’. It apparently comes from ancient Greek to mean what we’d say blah-blah as a term for words we don’t or can’t be bothered to understand.)

James C Scott is now an 82-year old Emeritus Prof at Yale, a political scientist and anthropologist who specialised in early agrarian societies, Mesopotamia and the like. Recent archaeological discoveries have overturned much of his life’s thinking and teaching about how agriculture enabled civilisation. Nope.

I quote from his Preface:

“We thought (most of us anyway) that the domestication of plants and animals led directly to sedentism and fixed-field agriculture. It turns out that sedentism long preceded evidence of plant and animal domestication and that both sedentism and domestication were in place at least four millennia before anything like agricultural villages appeared. Sedentism and the first appearance of towns were typically seen to be the effect of irrigation and of states. It turns out that both are, instead, usually the product of wetland abundance. We thought that sedentism and cultivation led directly to state formation, yet states pop up only long after fixed-field agriculture appears. Agriculture, it was assumed, was a great step forward in  human well-being, nutrition, and leisure. Something like the opposite was initially the case. The state and early civilisations were often seen as attractive magnets, drawing people in by virtue of their luxury, culture, and opportunities. In fact, early states had to capture and hold much of their population by forms of bondage and were plagued by the epidemics of crowding. The early states were fragile and liable to collapse, but the ensuing “dark ages” may often have marked an actual improvement in human welfare. Finally there is a strong case to be made that life outside the state — life as a “barbarian” — may often have been materially easier, freer, and healthier than life at least for non-elites inside civilisation.”

Elites in these early states achieved a life of leisure through holding many people captive behind city walls and feeding them calorie-dense, not very nutritious grain. Grain can be stored — unlike nutritious but perishable food stuffs from hunting and gathering.

No surprise then that all the archeological evidence shows that people’s health and wellbeing suffered badly if they ate cereals as their main source of food.

Town-dwellers and citizens were (arguably still are) domesticated animals, used to fight wars, undertake the hard labour of growing yet more grain to feed yet more people — because like all domesticated animals sheltered from the elements and given calories to eat, we had lots of off-spring once our immune systems coped with the epidemics of crowding.

And here we are today, having to cultivate more and more of the world’s scarce resources to keep everyone going.

James C Scott cites “at least 1600 CE” as the end of “Golden Age of the Barbarians”, i.e. non-state people, hunters and gatherers, marine collector, horticulturalists, swiddeners,  pastoralists and a good many farmers who were not entirely government or taxed by any state.

A note re swiddeners: They are people who practice slash-and-burn; see this FAO account of this maligned practice, one that has no place on our crowded planet with no more wilderness to turn to.

Aspects of our current food system in the light of the above: