This blogpost is about the language of small world networks, and how it helps our understanding of the food supply system.

The last blogpost was about privatives; i.e. words we use to denote an absence of something.

Another limitation about the language we use is this: We don’t describe what we see, we see what we describe. When, however, a word to denote something beyond our perceptual system is used widely, then our perception about the word changes — and the world changes too. (Think how much our health depends on, say, the words we use to for microbes, from the everyday word ‘germ’ to a scientist’s label for a particular crop pathogen.)

A network is a particular kind of system aka a complex adaptive system.  The food you eat has got to you via a tangled web of over-lapping and intersecting networks.

In this supporting blogpost to our response to the National Food Strategy #10: The space between farm gate and food outlet, I wrote this:

“It’s a complex adaptive system. Thus it’s largely opaque, not open to introspection. So we need think differently about it.”

My proposition here is that the language of complex adaptive systems and networks will help us better understand what we can’t see but exists within our food supply system.

To introduce some of that language to you, I’m going to begin with the eerily familiar phenomenon of small world networks, aka six degrees of separation. (note: The word phenomenon just means something we don’t understand — and there’s a lot of meaning carried in the word ‘just’.)

I once demonstrated the typography of small world networks with a group of Italian part-time post-grads, many in their twenties, at the Scuola Superiore Sant’Anna, a prestigious business school in Pisa. I’d asked them to find a connection between any of them and my son, then a 19-year old undergrad at a UK university.

I knew in theory there would be many connections. Yet the speed of them finding one astonished me. But it shouldn’t have done, despite my son then being too young to have many “weak ties“.

The first question the Italians asked was about what sport, if any, my son played.  (After all, the Pisans realised, young men like themselves often play sports, as did my son. He was a good fencer, in his university team.)

Then came a second question, this one for confirmation of his first name.

It turned out one guy shared a mutual friend (guess what, a fencer), two others realised they were two degrees from him . . . and then other people joined in, realising that if so-and-so was in my son’s small world, then . . . and then other links via the first guy, not me, telling the group which UK university my son attended.

The whole of humanity, all 7.7 billion of us are part of a small world network (a link for those of you interested in the maths of it all).

Here’s a more understandable explanation of how a group of Italian ‘strangers’ connected with my son. The most important words in it all are in red: 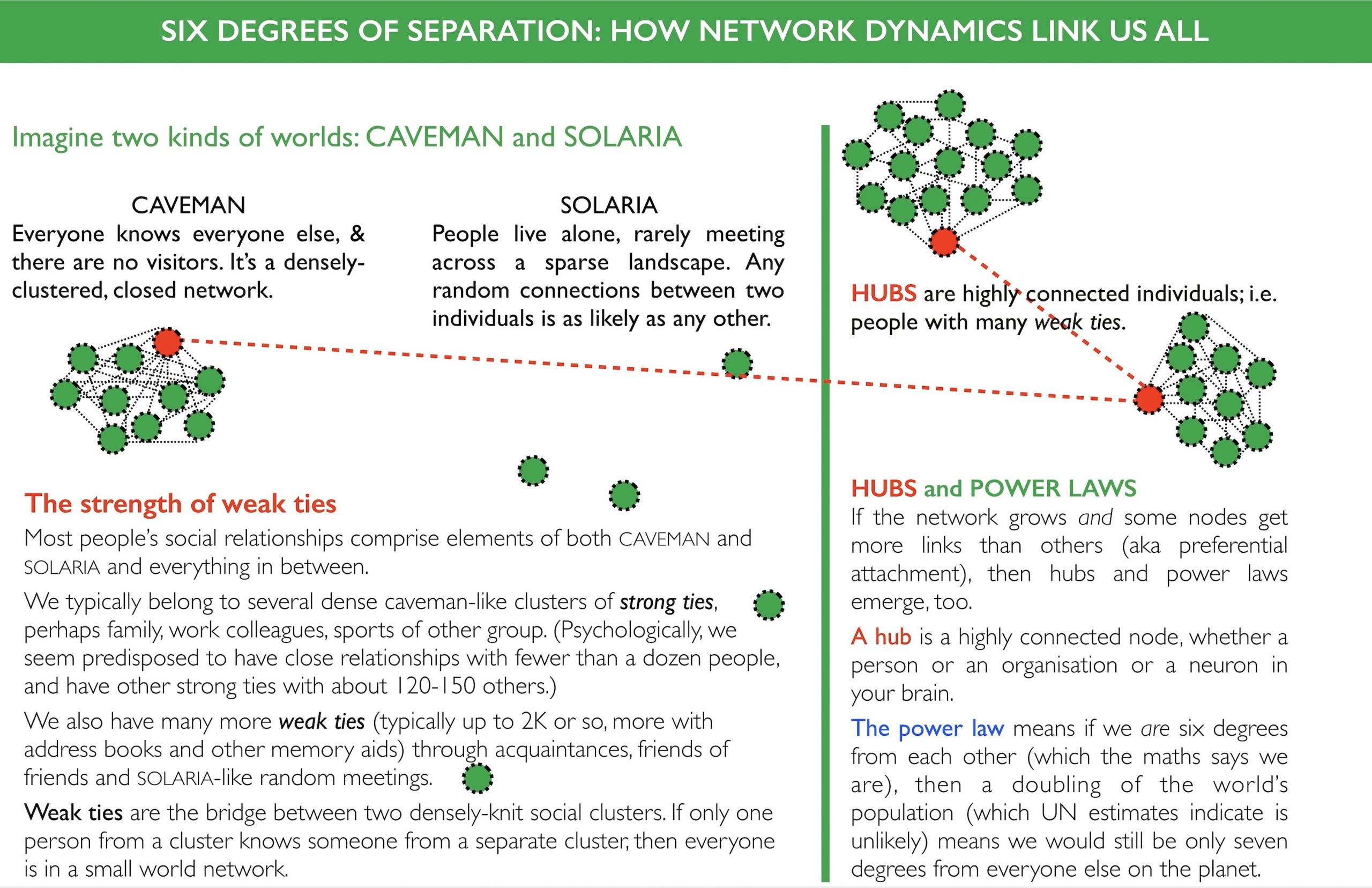 Just as the Italian students found a caveman-like network outside the university sector to which they and my son both belonged (a sport), so, too, food sector businesses are connected to organisations outside the sector.

The food sector and the strength of weak ties . . . (a term coined by sociologist Mark Granovetter in 1973  here)
Examples include packaging and logistics companies, providers of payment systems, insurers, HM Revenue and Customs, etc, organisations that are hubs with a high volume of weak ties.

Be wary of big numbers: As Hans Rosling points out in Factfulness, we have an instinct that tells us that if a number is big, it must be important. But it’s an instinct that is can be wrong. Here are two examples:

More about the language of networks, and where it all plays out in systems other than our food supplies? Yup, once you ‘see’ networks, you see their typography everywhere.

Here’s a great TED-Ed three and a half minutes’ worth of Marc Samet using brilliant animation to explain key stuff about network theory, including how small worlds work: