A “transformed” food system means a radical restructure of what happens between farm gate and retail outlet.

Why? It’s where most of the activity and nearly all of the profits lie.

One of the Players engaged with 30 others in our scenarios Game last year, was shocked about  how many don’t have a clue about any aspect of the food chain“.

This is nowhere more evident in that largely opaque space between farm gate and retail outlet.

Most people from across all walks of society has only a little understanding about how the billions of portions of fruit and vegetables get from the farm-gate (wherever it might be in the world) and into our shops.

This crucial part of the supply chain involves a series of complex, dynamically changing operations. A simplified (!) version of what happens is illustrated in the map below: 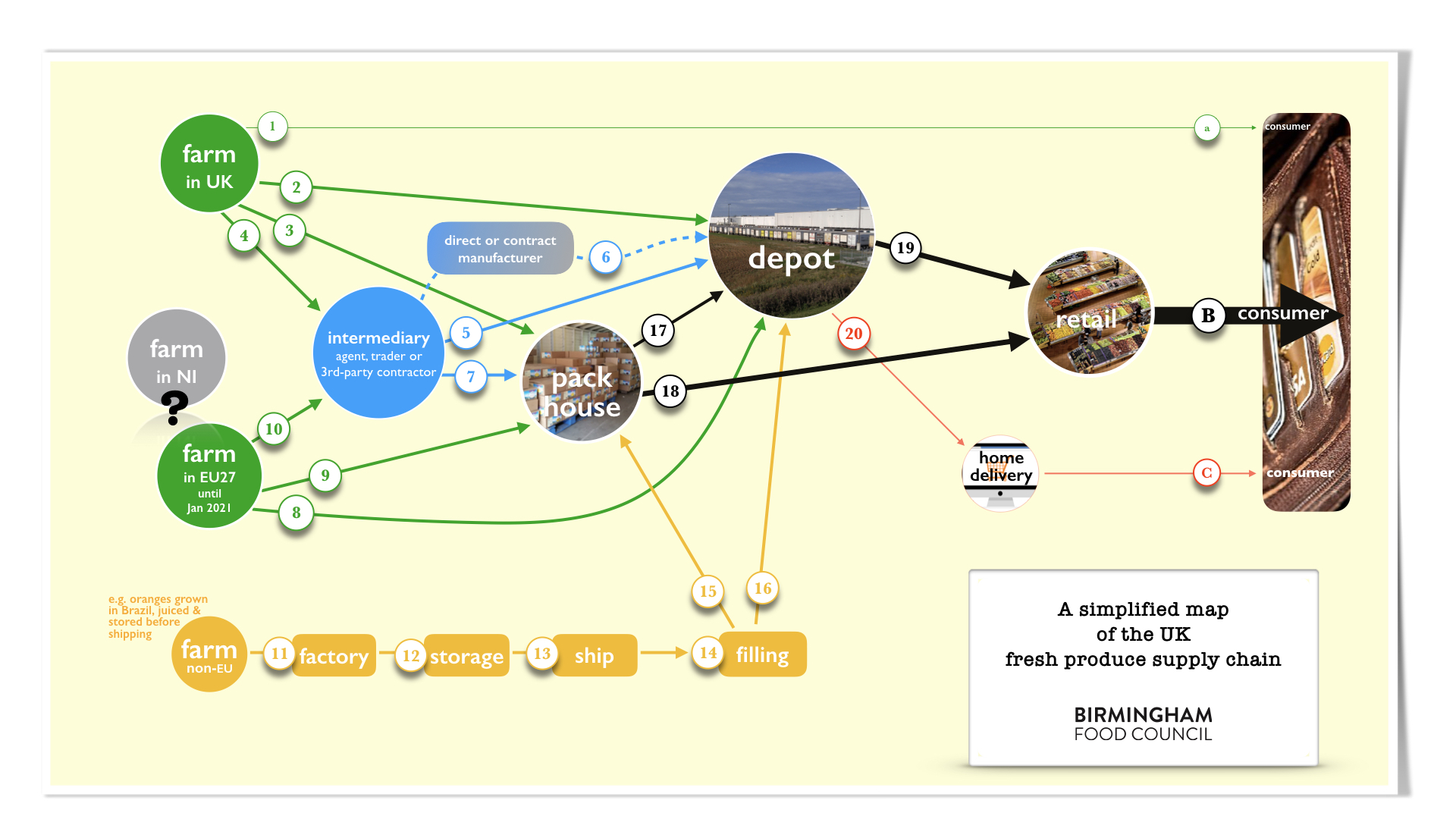 Or if you prefer an animated version set to music, see this video:

This map was first drawn on a flipchart by the fresh produce wholesaler and the supermarket exec at a workshop we ran as part of our submission to the National Food Strategy Call for evidence.

You, the consumer (and your wallet) are at the end of a host of processes largely hidden from you — unless you buy directly from the farmer. Even if you do, you’ll be aware that lots of farm outlets source the produce on their shelves from outside their farm gate; see for example, this blogpost about Beckett’s Farm in Wythall, just south of Birmingham.

The Beckett’s Farm blogpost highlights another, significant factor in the food system. It’s well nigh impossible to make a living as a farmer engaged solely in primary production. It’s worth remembering, too, that the margins along the whole fresh produce supply chain are tiny, 0%-2.5% was quoted to us a couple of years ago (see Back from the future, our horizon scanning report), and we’ve heard margins have been further squeezed since then.

Remember, too, this supply chain map is a simplified version. In reality every step of the way is far more complex, and involves lots of people, hefty expensive equipment (a grower recently told us that they’d spent some £400K on a robotic system for a single purpose, to plant sweet-stem broccoli), just-in-time logistics, inspections and testing.

Simplified though it is, this map highlights these six points relevant to transforming the food system:

4. Local provenance for cities such as Birmingham?

Yet despite all the above, this complex supply chain all somehow configures itself so that a wide variety of food comes efficiently, seemingly effortlessly into our cities, so anyone with enough money to pay for it can tuck into a good meal, perhaps one of the delicious-looking plates of food in the image at the top of this blogpost.

It all works. Like magic.* But for how long?
* Any sufficiently advanced technology is indistinguishable from magic is the third of Arthur C Clarke’s Three Laws.

This blogpost and #5 are both about the fresh produce supply chain; i.e. the foodstuffs that provide us with moat (but not all) of our nutrients. The next blogpost in this series, #7: Loaves don’t grow on trees, is about where nearly all of humanity, including the UK population, now obtains most of its calories.