Biologist Jack Cohen, one of the New Optimists scientists, used to say that you cannot ‘think outside of the box’ unless you know the geometry of it very well indeed.

This blogpost is about six (of an uncountable number of) aspects of the ‘geometry’ of the existing UK food system, with some reference to the part of the ‘box’ called Birmingham.

1: Population density
Our misty northern isles support 66.9M people today, and counting. Over 85% of us (56.9M) of us are urban dwellers, with most of us living in the southern half of England, with the highest density in London and the south-east.

If that seems eye-wateringly crowded, then note:

And these two international comparisons:

2: Birmingham: More than 99.99% of our food is grown outside our borders
The Birmingham 2050 Scenarios Project was about possible food futures for the city. In 2011, I wrote this in the Project Report: Despite famines within cities from ancient to modern times, there are a surprising number of people who express the notion that cities can be self-sufficient in food, or much closer to self-sufficiency than now.

Nine years on, I’m still taken by surprise by utterances of people who would know better if they stopped to think about these figures:

Let’s suppose we can increase grow-your-own (GYO) within a city’s boundaries:

This is why I wrote this blogpost in February 2019:

Moreover, many cities, including Birmingham, have contaminated soils and/or air.

Professor Chris Elliott talked about eating food grown in contaminated soils or polluted air as part of our at our horizon scanning project (see pp2-3 of our 2018 project report).  In a nutshell, it’s is harmful to your physical, mental and cognitive health and wellbeing, with a particularly pernicious life-long impact on infants. Hence:

note: The 99.99% figure is an extrapolation from a figure Clare Devereaux, then working for Food Matters, gave to the APPG on Agroecology at the House of Lords in 2012. The Food Matters team had assessed that, in the city of Brighton and Hove (approximately 16% less densely populated than Birmingham) 0.14% of what was eaten in their city had been grown in gardens, community orchards, allotments and 4,400 hectares of farmed land owned by the city. In other words, 99.86 of the food eaten in Brighton and Hove comes in on trucks, trains and planes.

3: Birmingham’s food security doesn’t, and shouldn’t depend on produce from the West Midlands agricultural shires
Regional primary production has a minuscule impact on Birmingham’s food supply. With an apology for the pun, all but a tiny part of regional farming production feeds into the national supply system which is, itself, part of the global system.

There are many aspects to the ‘geometry’ of the ‘box’ that means the population Birmingham is not at the end of a regional supply of safe, nutritious fresh produce. Sure, some cities and towns depend more on regional primary production, particularly in the less densely populated locations. Sure, too, some cities have traditional cultural preferences for certain foodstuffs, and that legacy continues within some communities.

3 (a): One aspect of this ‘geometry’ of the regional supply chain is that it is part of a much larger complex adaptive system; see this earlier blogpost in this series: #6: The fresh produce supply chain.

There are no simple cause-and-effect routes through a complex adaptive system.*

Let me illustrate with an example: Imagine Herefordshire apple growers divert, say, 20% of their crop to supply the Birmingham population with apples:

3 (b): As for farmers’ markets: Purchases are less than a thousandth of the total UK consumer spend. The latest Statistica figures for farmers’ markets were published in 2019, and are for 2011 when sales revenue was £220M. Defra’s Food Statistics Pocketbook for 2012, i.e. about 2011, reported a total consumer food and drink spend of £179bn.

*Over the last 20-30 years, a new vocabulary has emerged to help us describe and therefore better understand complex adaptive systems and networks. It is therefore welcome Henry Dimbleby mentioned and quoted from Barabasi’s 2002 book Linked in his speech to the  Oxford Farming Conference:

4: UK Geography
Why has Birmingham never been a major agricultural area? Answer: It doesn’t have the natural resources to sustain much, being on an exposed plateau with thin soils and no natural water supply but for a few streams.

Birmingham, as other cities, are dependent on UK primary production for a proportion of our diet, but only a proportion (see section 5 below).

About 75% of UK land is used for farming, as can be seen from this infographic providing ratios of agricultural type on page 13 of the 2018 Committee on Change Change report on Land Use (which is also a reminder of the significant carbon footprint from agriculture): 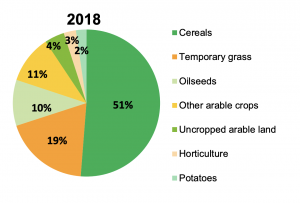 Another way of understanding UK agri-stats is to look at the proportion of  arable crops grown here; see this 2018 Defra generated pi-chart about croppable areas. Notice the predominance of cereal crops, and the tiny proportion devoted to horticulture.

We need remember, too, that different farming practices are suitable for different areas.

For example, 80% of farmland in Wales and 84% in Scotland are viewed as “less favoured areas”. This is why much of Scotland and Wales — and the upland English moors such as the Pennines and Yorkshire Dales — are used to raise livestock, think cattle or deer on the Scottish Highlands, or sheep in the Dales or Lake District.

The climate on the western side the UK is warm and wet, providing good grassland for dairy cattle in places such as the West Country and Cheshire, as well as the flatlands of Lancashire  being a ‘salad bowl’ for the UK, as well as growing other root crops and brassicas.

5: Food trade, especially of nutrient-rich produce
It’s widely accepted that the UK currently imports about 40-50% of the food we eat — depending on local harvests.

According to this Business Insider article in January 2019, however, it’s much higher. They cite a figure given by HSBC analyst David McCarthy of 80%. Why the discrepancy? The lower percentage “defines food processed in the UK as UK food, even though the ingredients may have been imported. For example, tea is processed in the UK, but we grow no tea _ it is all imported. When ingredients are counted as imported, the real figure is over 80%.”

Whatever the percentage of imports is accurate, Defra’s latest available figures show the value of imports was greater than the value of exports in each of the broad categories of food, feed and drink, except beverages which has a trade surplus of £1.71bn, largely due to exports of Scotch whisky (see also A note about exports below).

Fruit and vegetables have the largest trade deficit. In 2017, exports were worth only £1.2 billion, while we imported £11.1bn. This production to supply ratio means we are particularly vulnerable to disruptions.

This vulnerability would be gravely compounded in the event of a ‘no deal’ Brexit as we’re heavily dependent on the EU: Gro Intelligence reported that in 2017 , the UK imported 30% of its food from the EU, of which 76% are vegetables and 41% fruit and nuts. Put in another way, without the EU supplies coming through, the UK population could face acute supply shortages of nutrients.

On this matter of the global competition for sufficient supplies of safe, nutritious food, here is Parveen Mehta, a Director of Minor Weir and Willis talking on this very matter at a workshop, part of our horizon scanning project (2017-18):

A note about exports
According to the Food and Drink Federation, whisky was our biggest ‘food’ or beverage export product, chocolate products were second. Beer, wine and gin are also in the top ten in 2018. These figures indicate the political challenge of tackling the risks drug foods present to our supply system as outlined in blogpost #15: Drug foods and their specific risks to the food supply system in support of our Submission to the National Food Strategy Call for Evidence.

Could we grow more nutritious food nationally? Globally? Undoubtedly so. But that does mean transformational change. And some of the most significant of changes may well be in ways we can’t (yet) imagine.

6: The geometry of a part of the box called British history
What follows is a mere light skip through all the wealth of research and writing on British history. Moreover, it’s my non-historian take on the tiny part of all expert comment and analysis that I’ve read.

My thoughts on these matters began less than a decade ago when I set up the Birmingham 2050 Scenarios Project about food futures for the city in 2011. As part of my research on the topic, I got into the habit of looking up the word ‘food’ in the indexes of history books. And I found it remarkable then as now, that the word doesn’t often appear.

Three examples: The word “food’ isn’t in the index to Peter Hall’s brilliant book Cities in Civilisation (1998). Nor in Lawrence Freedman’s compelling Strategy: A history (2013). Nor in Peter Frankopan’s 2016 The Silk Roads: A new history of the world, nor indeed to his follow-up 2018 book, The New Silk Roads which is, as the subtitle indicates, about ‘the present and the future of the world’; i.e. during a time when threats to the global food trade system look set to increase.

Why is this? I suggest the following are all contributory factors:

I gave Jack Cohen the first word in this blogpost. I’m also giving him the last. Here he is being interviewed at the launch of The New Optimists book in September 2010, and talking about complex systems as networks. The video clip starts with him talking about the work of Barabasi, the guy Henry Dimbleby mentioned in his Oxford Farming Conference speech:

The next blogpost is #9: The role of STEM (science, technology, engineering and mathematics in the transformation of the food system.