At the Oxford Farming Conference last week, Henry Dimbleby put today’s urgency to transform the food system in the context of the Green Revolution in the latter half of the 20th century.

What might be the nature of the next food system revolution that will the world’s growing population and tackle today’s environmental challenges Dimbleby outlined arising from earlier ‘revolutions’ in food production — all in the context of climate change and all its effects?

This National Geographic article speculates about this next Green Revolution with stories — and, as you’d expect, the most stunning of photographs — from across the world about what’s already on the horizon.

The UK food system already depends on an array of technologies, including powerful data processing, logistics, lighting, robotics, storage, packaging and materials technologies and the rapidly growing understanding of genetics.

note: Low or negligible profit margins in the fresh produce sector, coupled with often substantial investment in technology translate into increasingly high barriers to entry of new players into the sector.

What of the near future? Here are six examples already emerging on the horizon:

1: GM crops
GM crops are officially prohibited in the UK, as in 18 other countries in Europe and 36 others owing to concerns about environmental impacts, food safety and intellectual property law. In the future?

This 2014 meta-analysis concluded that GM had reduced pesticide use by 37%, increased crop yields by 22% and increased farmer profits by 68%.

Some GM can mean a crop can contain an important nutrient that it wouldn’t otherwise; an example of this is “Golden Rice’, fortified with vitamin A — vitamin A deficiency (VAD) is a major cause of blindness in young children from developing countries. Is it a superfood, as Ed Regis’ recently published book: Golden rice: The imperiled birth of a GM superfood would indicate?

Few of us have much of a clue about the science of it all — which is why these Royal Society webpages and links from them are so useful.

2: Perennial crops
Most of the plant-based food we eat, including most cereal staples, are annuals, i.e. require planting every year. There are scientists working on projects to undertake breeding programmes in wild, previously undomesticated perennial species, and in perennialising existing annual cereal crops as described in the Global Inventory Project website. It’s estimated, however, that the development of such crops at a commercial scale will take up to 25 years.

See also this wikipedia entry, which lists the familiar perennial herbs, vegetables and fruits already within the food system.

3: Edible insects
Given the increasing pressures on agricultural resources, plus more people on the planet, insects are a potential food source for people and livestock. Some are nutrient efficient compared to other meat sources.
see the UN FAO site on edible insects here.

There are, however, challenges and safety concerns; the European Food Safety Authority are currently reviewing several insect species, and published this risk profile for the house cricket in August 2018.
see also the International Platform of Insects for Food and Feed (IPIFF)

4: Fertilising soils & dealing with crop pathogens
The steep rise in agricultural production owes much to fertilisers and pesticides, but come with potentially unsustainable environmental costs. Scientists are exploring ways in which depleted soils can be enriched and pests controlled by a variety of means.

An example of such ideas was shown at a Warwick GRP Food Conference on 6th February 2020 by Dr Alex McCormack, and summarised in his poster below, evidence should anyone need it, of the importance of research: 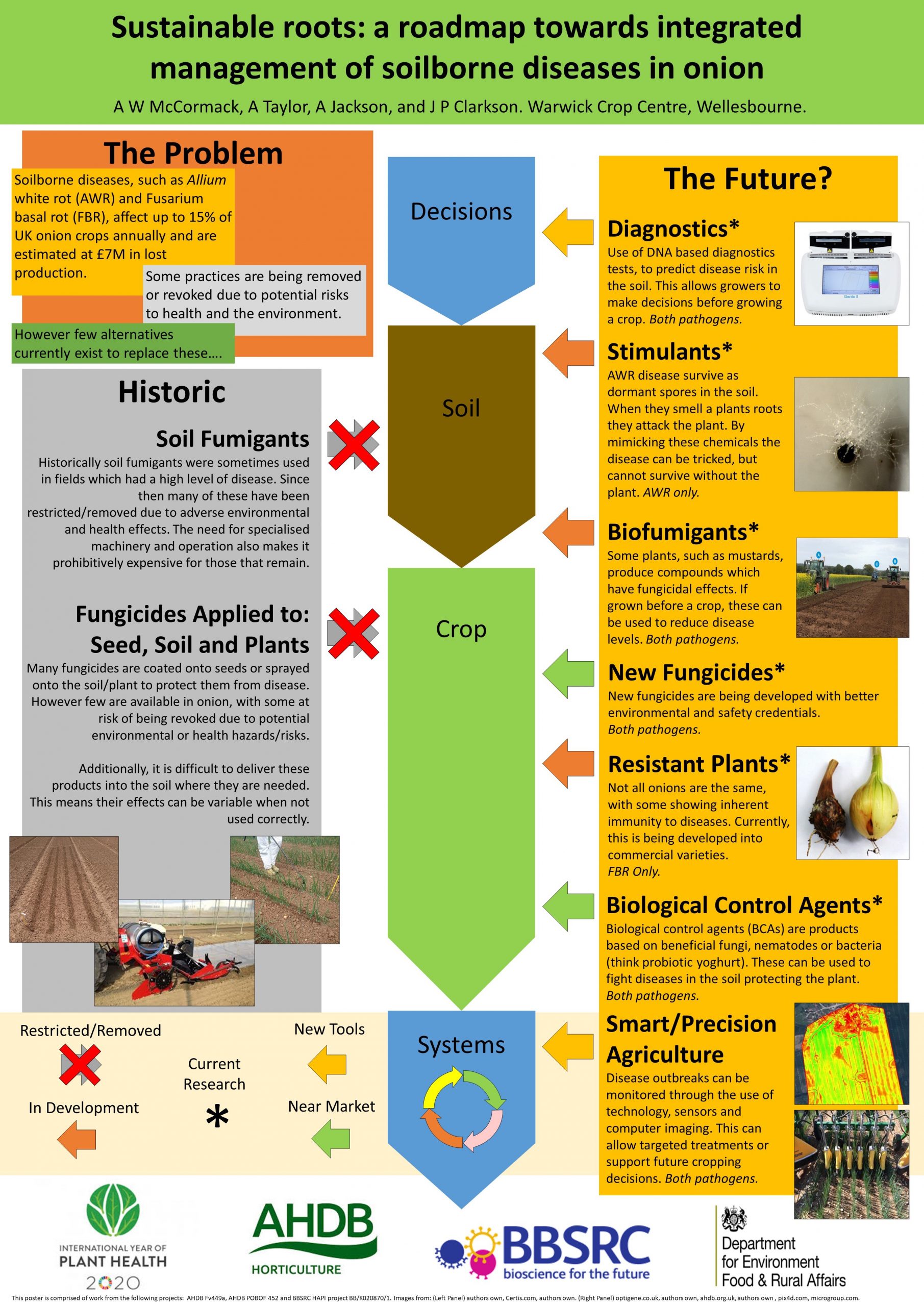 5: Farm-free food products
News of ‘farm-free’ manufactured ‘foods’ have recently been in the headlines again. This time, noted environmentalist George Monbiot is suggesting lab-grown food is about to destroy farming  — and save the planet according to his Guardian article of 8th January accompanying his Channel 4 documentary Apocalypse Cow: How meat killed the planet.

Lab-based food inventions have history, from meat substitute Quorn in the mid-1980s by Marlow Foods (a join venture between then ICI and consumer food business RHM) to the first lab-grown meat burger in 2013.

6: Vertical farming
Is vertical farming at scale viable? I’d argue not  . . . yet, except for a few types of crops, notably high value leaves. Currently, it’s just not commercially viable for many other crops, not least because of the costs of land, building and energy and, as yet, some of the technologies needed.

Although QUB research fellow Andrew Jenkins mentions the economic costs of energy in this article from September 2018, he goes on to make this not unusual claim: there is little question that vertical farms will play a big role in urban farming and agriculture in the future.

Even without consideration of the economics of it all, do the proponents of vertical farming take account of the scale of what it takes to feed a comparatively small city such as Birmingham; see blogpost #5: The scale needed for our give-a-day.

Will the economics of it change? Although the likes of UAE have deep pockets and depend on 85-95% food imports for survival, vertical farming at scale still poses huge challenges, as this Covid-19 lockdown article of 20th April 2020 in the Khaleej Times implies, despite its buoyant tone.

Will new technologies in building and energy make a difference? Enough of a difference? Moreover, although much is sometimes made of vertical farming being ‘organic’, pathogens and associated pest control will feature; many a microbe or larger critter likes our food, especially in enclosed warm, humid environments. Dependence on high-tech, too, means any failure in the system will be costly.

As a city undertaking, vertical farming is, in my view, unlikely to be anything but a fringe activity. That’s not to say, however, that experimentation should be discouraged. Far from it.

We need new ways of producing food and, one never knows, out of the most unpromising of beginnings, can come a welcome revolution.

The next blogpost is about a particular kind of system, typified in much of today’s food system: #10: Complex adaptive systems, networks and their dynamics

#8: The geometry of the box [we need think out of]