1: There are two main factors why so many people can’t access food, and, for an unfortunate number of us, it’s sometimes a combination of the two:

Physical access: they either can’t get to a retail outlet, or get on-line deliveries.

Economic access: Or they are one of the dramatically growing number of people who cannot afford to buy sufficient supplies of safe, nutritious food — some can’t afford to buy any food.

And while food insecurity is on the rise, the wastage of food, which rose suddenly and dramatically with the closing down of the hospitality sector and its supporting food service supply system, is still continuing, despite considerable efforts to access it by retail-facing outlets and charities and community groups making valiant efforts to divert these supplies to those in need. 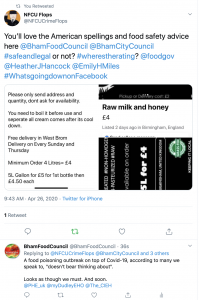 2: Desperate people are prey for scammers, the unscrupulous and organised crime: In an earlier blogpost about the risks inherent in loosening regulations, there is an image of a twitter exchange between @NFCUCrimeFlops and ourselves (replicated again here) about ‘raw milk’ being on sale on Facebook, and for delivery in West Bromwich.

How many people see the dangers in buying such produce? We already know that dodgy food hygiene is far more prevalent in more deprived neighbourhoods.

And, even when you do understand the risks, taking a chance  may seem small compared to assuaging the relentless gnaw of hunger.

In addition to the (sometimes lethal) consequences on the individual taking such risks, there are two ways in which society as a whole benefits from preventing such choices:

note: Way back in early December 2019 when Covid-19 was a few cases of an unknown illness the other side of the world, I wrote this blogpost: We treat non-existent things as entities. A ‘privative’ is a useful concept to notice when we do. Scroll down to the unfortunately apt image of Terry Pratchett’s DEATH for these days. There you can read the following paragraphs, listed here as bullet points:

note: The last [bulleted paragraph and their] two links were added on 23rd February 2020, and take you to two blogposts written to support our submission to the National Food Strategy Call for Evidence.