This week’s Farming Today was outstanding. And I’m not just saying that because Barbara Bray was the first speaker.

I was so impressed that I downloaded the podcast to listen to it again. Here are a few of the insights I gleaned from the contributors:

Barbara Bray, who made this UN Food and Agriculture Organization (FAO) video: Food systems are not set up for success
Her main point was that what we’ve seen with the impact of Covid-19 on our food supplies, are opportunities about system structure change. The example she gave was pre-Covid  logistics system. Large quantities of good food was stuck hospitality sector sector, and there wasn’t any way it could reach the population in urgent need of it.

David Nabarro, former senior UN official, now Professor of Global Health at UCL and, since February since February, one of six special envoys appointed by the Director General of the World Health Organisation tasked to respond to the COVID-19 pandemic

His major point was that actors in the system make trade-offs all the time. They have to, to be resilient, fit for purpose. About affordability of food, decent livelihoods workers in the system, that food is safe and nutritious, and their production is environmentally sound and all the issues associated with climate change.

How, he asked, can subsidies contribute to the above? How do we enable actors to make these trade-offs?

Ertharin Cousin, former Executive Director of the World Food Programme, and US Ambassador to the FAO
She reiterated Barbara’s point, extrapolating from it that the UK has no contingency plans for getting food supplies from elsewhere, adding in that regional processing doesn’t exist, a capacity required for a crisis situation.

She pointed out, too, that the UK had made ‘little investment’ in meeting such challenges, even with Brexit. There is a need for system agility as well as system capacity. 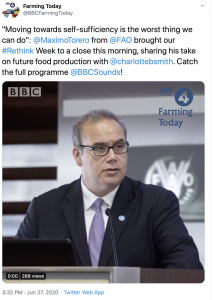 Maximo Terroro, Chief Economist at the UN FAO
He echoed all but Tim Worrall, saying that we have to find ways to have sustainable, healthy diets — different from today’s system. And resilient to future shocks, such as Covid-19.

He also made the important point that self-sufficiently is not the way to go (click on the image to hear his words) He pointed out that we have to have a global trade of commodities. The second most traded group of products is meat. He said, however, that for fruit and vegetable supplies into cities, there are strong arguments for a significant proportion to be locally supplied.

We need global  intra-regional trade, also inter-regional trade. There is less of the latter; for example in Africa. Food safety standards are key to this happening.

Three important comments on the above: