The CCC provides advice on setting carbon budgets, and reports regularly to the Parliaments and Assemblies on progress made in reducing greenhouse gas emissions.

If there were a Committee on Food Security, what would its remit be? We put forward that it should:

The Committee on Climate Change was set up in 2008,  the year after the Fourth IPCC Report (the one confirming climate change was happening), and when the UK Climate Change Levy had already been in place for seven years.

In contrast, UK food security was barely mentioned in the media until the 2018 heatwave across the northern hemisphere, despite many earlier warning signs about the fragilities and vulnerabilities that our horizon scanning project had identified and reported in our project report: Back from the Future.

The impact of lockdowns across the world in response to the Covid-19 pandemic has opened the eyes of many.

When lockdown happened, many a senior policy-maker was surprised that the UK food supply system is as vulnerable as it is. 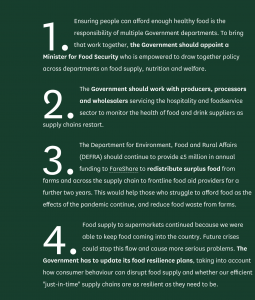 The Chatham House submission to the recent EFRA Commons Select Committee  Call for Evidence in their Covid and food supply enquiry, however, started with the statement our food systems are fragile. It was compiled by Chatham House Fellow, Professor Tim Benton who serves on our Panel of Experts and came to our horizon-scanning workshop in October 2017.

As a result of submissions such as his, the EFRA Commons Select Committee’s first recommendation is that the Government appoints a Minister for Food Security (see right)

We’re suggesting here that the Minister, and all succeeding governments needs to be advised by an independent, statutory body.

Is there an argument, too, for there to be a levy to build resilience capacity into the food supply system?

Something akin to the Climate Change Levy, without which the UK would not have its current capacity to generate non-fossil fuel energy?

Such a levy was one of the ideas put forward by participants in the first of our mini-workshops on 5th August, set up to explore and challenge our proposition that the UK sets up buffer contingency food stocks. We’re running the second of these workshops next week, and hope to make our findings public later this month or early next.