This is an account of my talk on 12 September 2020 to the UK and American Cybernetics Societies on UK preparedness for future food system shocks: Designing and building a buffer contingency stock system.

After a brief introduction about the Birmingham Food Council I talked on three matters — which are given fuller explanation  below:

1; Threats and risks
Three years ago we carried out a horizon scanning project. It hammered home to us the urgency of the global challenges that climate change, resource depletion and population pressures were putting on the global competition for safe, nutritious food, and the impact it would all have on geopolitics.

Even more concerning to us was that no socio-political decision-makers appeared to be taking food security seriously.

Indeed, the risk and resilience plan for our region was  — and to our knowledge still is, (a) out of date and (b) contains this remarkable statement: there are no realistic scenarios within the UK which would lead to a shortage of food supplies.

Hence, we invented The Game, in which we put Players in charge of a city. We’ve had all sorts playing it, including City Councillors, emergency planners, agri-food researchers, an architect/spatial planner, economists and people from across the food sector.

In the first round, our Player (we only have one, all that’s needed!)  throw a few events at them, ones that have really happened recently. We tell them that he’ll return in five years time and their job is to prepare their city for what might be coming.

Our Player returns and gives them events that are plausible possibilities drawn from the literature. Then the Players have to make more preparation, this time for our Player’s return with yet more events in another five years’ time.

Our Playere has the power to sweep Players’ ideas out if they’re irrelevant to tackling the challenge of feeding the city.

For example, one  Councillor had the notion that planting potatoes along the A38, one of the main dual carriageway arterial roads into the city. All humans have difficulties in judging scale, or dealing with big numbers . Everyone of Birmingham’s 1.2m people, for example, requires on average, 200o kcal/day. That’s 2.4bn kcal every day for the whole population. Besides which, how safe is it to eat a crop grown amid traffic fumes or in soils that might well be contaminated with heavy metals, a legacy from Birmingham’s industrial past?

(Not a wise thing to do. Indeed, there’s evidence that a third of children living in rural China are cognitively stunted as a result of pollution. Many of China’s rapidly growing middle class choose not to eat foods grown in China because of the impact of pollution on crops. Yes, the global competition for safe, nutritious food, already intense, will only increase. 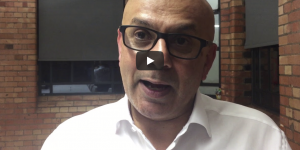 On this matter, do watch this video interview of Parveen Mehta, Operations Director of Minor Weir and Willis.)

Another example: One of our Players was the former Chief Executive of a major UK city. He very quickly recognised that he was powerless, and said he would call in the Army to deliver food to his citizens.

All the Players found it hugely difficult. Too difficult . . .

Former Players called us up. Kate, we’re in The Game, they said. Nothing that’s happening is surprising. Their playing of The Game meant they were more than one step ahead of others.

Compare that response to this: A top City Council officer in his first statement about Covid and food supply into the city: What has surprised us is how fragile the food system is. And how powerless we are to respond. (see also this blogpost, which gives figures about the scale of the failure of the system.)

So how could the UK be better prepared to respond to future food system shocks?

What would a plan for being better prepared look like look like, have buffer stocks? What policies would we need to made it happen? What would be the right mix of food stuffs? And, given nutrient dense foods, i.e. fresh produce, goes off quickly, how might we store and rotate the stocks?

Taking stocks out of the current Just-in-time (JIT) systems, is a cost in itself, let alone storing and rotating it. So what mechanism would need to be in place to pay for it in perpetuity?

2. The work we’re doing on how to make the UK better prepared for future food system shocks
To begin with, we interviewed several people deep within the food sector about it all. We then came up with a plan, which we are testing in a series of mini facilitated workshops through Zoom. So far, we’ve had two, with a third planned for next week. (And we expect to host another two or three over the coming couple of months.)

This isn’t our original plan (for that see page 3/5 of a report linked in this blogpost about  our “thought experiment”).

This is the current plan, the original amended in the light of the ideas generated in two workshops. We’ve called in Scenario A: 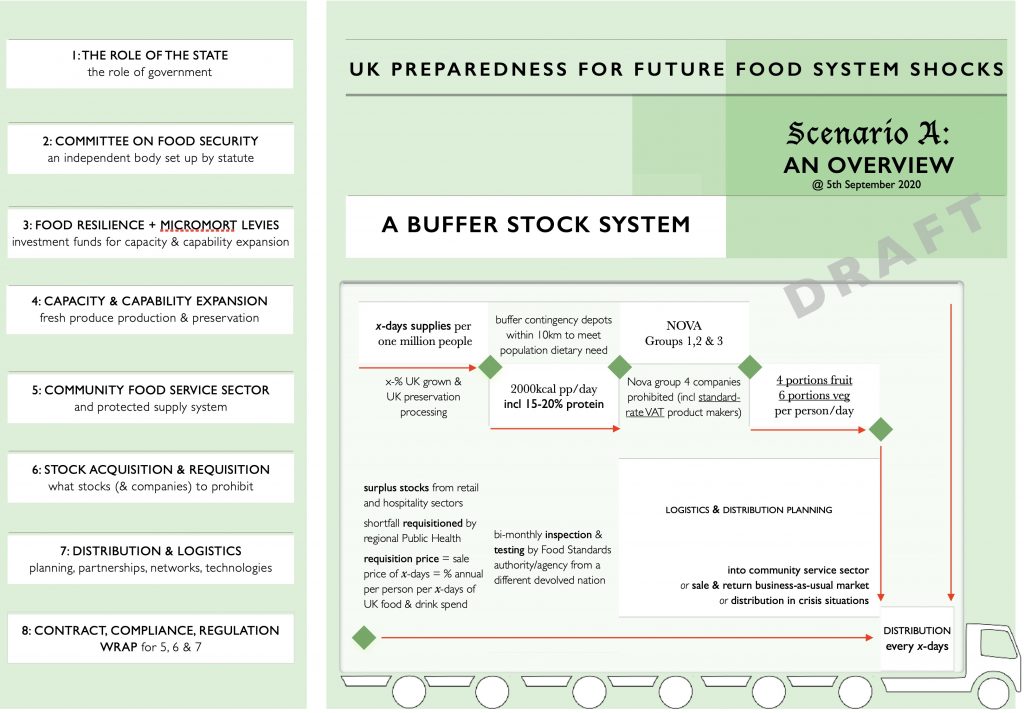 The eight items down the LHS are (what we’re calling) the ‘pillars’ upon which the system depends, based on the participants’ ideas.

For example, a large fresh produce wholesaler suggested a food resilience levy (#3 pillar), similar to the Climate Change Levy which could transform the UK’s capacity and capability (#4 pillar). From that sprang the notion of a Committee on Food Security, as reported in this blogpost. A senior supermarket senior exec thought it important that the state took on the responsibility to ensure sufficient supplies of safe nutritious food in all circumstances (as the UK has committed to under the 1996 Rome Declaration), and each government, regardless of political party, then acts as an enabler to make it happen (#1 pillar).

Our third workshop next week is to flesh out #5, a new community service sector, and how might we build on what’s happened because of the Covid lockdown and have a new sector, providing mass provision and mass catering to everyone, regardless of socio-economic status.

I then described one tiny but important aspect of #6, what stocks to have.

3. The ethical challenges and opportunities for human and planetary health in setting up buffer capacity stocks

There’s a curious, boring mechanism which, in an oddly powerful way informs us

It’s a tax. VAT (Value Added Tax) which is, for non-UK readers, a sales tax.

See what you make of this video:

VAT started off as Purchase Tax in 1940, when the UK was blockaded, and there were shortages, rationing et al. The Government put this new Purchase Tax on everything, except essentials.

Food is essential. Hence all nutritious food is 0% VAT.

Food that isn’t nutritious, indeed edible products that do us harm if consumed in quantity, carried and still carry standard-rate tax. They include all confectionary, drinks (not milk, of course, as that’s a nutritious food) and savoury snacks such as crips (or chips as the Americans call them); i.e,. the so-called drug-foods — alcohol of course, also caffeine, chocolate, sugar, sweeteners (yup, they do you harm tho’ whether or not they are addictive is still a moot point — just in case they’re not, most diet drinks contain extra caffeine).

Savoury snacks, I hear you say. They are designed to be more-ish, designed to generate the same physiological response in your brain that addictive drugs do.

It’s worth noting that ~50% of the UK household food spend is on these edible products, drug foods, that carry standard-rate VAT.

(For more about drug foods, see this post supporting our Submission to the National Food Strategy Call for Evidence: Drug foods and their specific risks to the food supply system or, this video set to a predictable genre of music, Drugs & Rock and Roll?)

You’ll see in the truck-infographic above that any company making and promoting products  carrying standard-rate VAT would be prohibited. You might also note the references to NOVA groups — info about them is on page 4/5 of the thought experiment, also replicated at the end of this blogpost.

And more the detail of these challenges and opportunities for human and planetary healths
Ethics about the food system are fraught with dilemmas. How should we think about them? We couldn’t fathom that one out, which is why we recommended the National Food Strategy team should recommend HMG set up a Public Inquiry on the matter.

Nonetheless, we are unequivocal about the necessity to curb the activities of any corporation that makes or promotes any ‘food’ or drink that carries standard-rate VAT.

One set of reasons is to do with the costs (economic and personal) that the local society pays for their consumption, ranging from diet-related morbidities, including obesity and malnutrition to the costs of recycling or otherwise disposing of products packaging. We’ve estimated that Birmingham City Council has to deal with ~100 million cans/bottles of Coca Cola alone.

Few think about the planetary costs of these corporations, notably their use of the increasingly scarce natural agri-resources of land, soils, water and energy. Here are two examples:

If you want to know more about these matters, see this Briefing Note on the food sector deficit.

A note about tobacco companies and smokers:
In the 1950s when incontrovertible evidence of the link between smoking and lung cancer was established, the UK government, as others, took action against the powerful tobacco companies. Excise duties, taxes were put on their products, so they became dramatically more expensive. Advertising, sponsorship and research partnerships were all curbed. And it worked, there are 70% fewer smokers in the UK.

In contrast, government action to tackle the addiction to drug-foods and their consequences put the onus on the individual. It’s all about behaviour change. About the individual relationships with products that, in quantity, are costing us and the earth.

This type of action will not work.  Moreover, that lack of efficacy is likely to contribute to the  physical and mental ill-health of those with diet-related morbidities.

An ending
I concluded by pointing our that the info about VAT is but a single aspect of of work to make the UK better prepared for future food system shocks. What we seek to do is answer this question:

How can we put what Michael Sandel has termed ‘civic virtue’ at the heart of of enabling everyone, regardless of socio-economic status, in times of plenty and in times of shortages and scarcities, eat great food in great company — whether your own or with others, and prepared and served with laughter and love on the menu too?

Two addenda to this blogpost. The first is a pre-recording of my talk:

And the second is page 4/5  from the thought experiment report mentioned above: 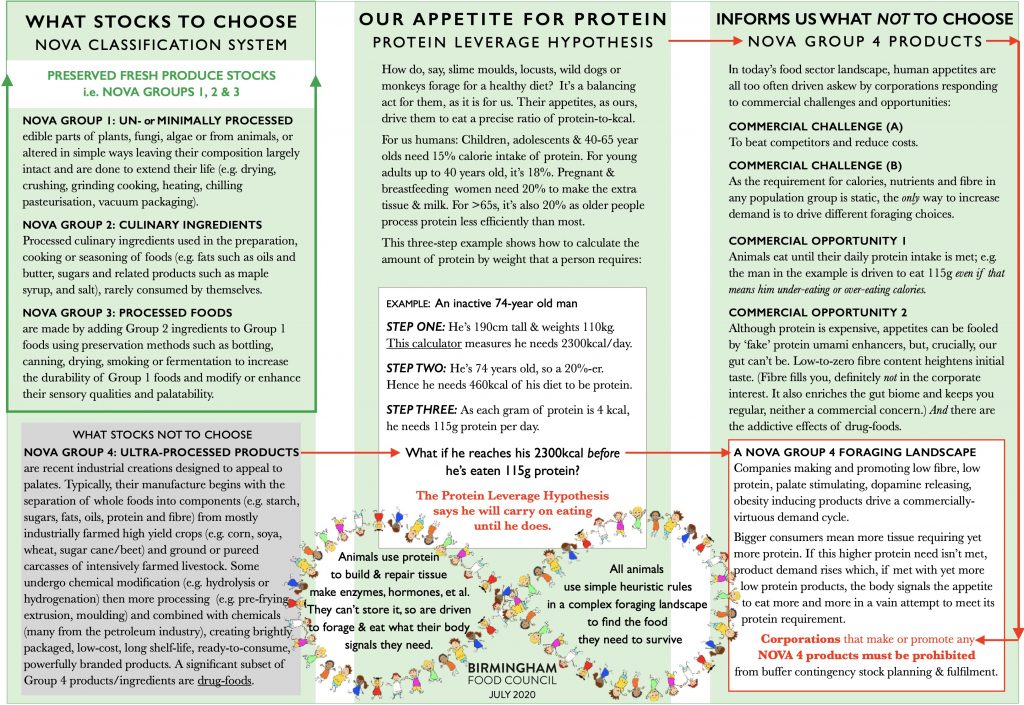