In this short presentation to the Healthy Food City Forum, I made three points:

FIRST
The scale of what it takes to feed the city — and just how bad humans are with big numbers
In the first slide,  I sked the question: What does it take for all citizens to have access to sufficient safe, nutritious food? 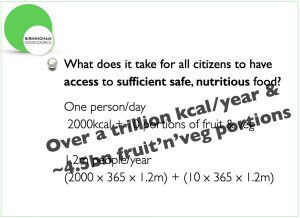 One person per day requires 2000kcal. There are 1.2m people in Birmingham and 365 days in a year. That means the city population needs over a trillion kcal/year.

For the best possible health and wellbeing for each individual, these calories must come from eating nutritious food, so needs to include 10-a-day portions of fresh fruit’n’veg, ideally some two-thirds being veg.

10–day?
I hear your gasp. Yes, that’s what the research shows. Five-a-day is good, for sure. But there’s a tipping point at 10-a-day when the health benefits become dramatically more. (1) 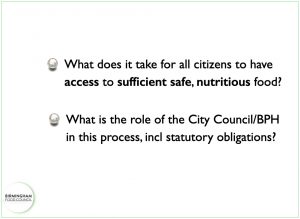 Those regarding food safety, assurance and integrity. This includes inspection and sampling, and administering the Food Hygiene Rating Scheme (FHRS). (2)

Another is their statutory obligation under the 2004 Cicil Contingencies Act to  be a partner in a Local Resilience Forum which, among other matters, has to draw up and publish a Risk and Resilience Plan every five years. We can’t find any current Plan. The latest (2014) made this remarkably hubristic statement about food supplies: There are no realistic scenarios within the UK which would lead to a shortage of food supplies. (3)

It’s likely to be more productive to discuss how we can enable every household in the UK to have sufficient money to be able meet their basic physiological needs for food, warmth, shelter and unpolluted air.

We also challenge the use of the phrase ‘food poverty’ as it’s a euphemism for some people not having enough money to buy the safe, nutritious food their minds and bodies, and thereby can divert thinking and recommend actions which will not tackle the basic cause, as we’re seeing now with arguments about the content of school dinner home packages, instead of questioning their very existence. (4) (5)

THIRD
Threats to Birmingham’s food supplies
The reason why prices will rise are these threats to food supplies — which are already having effect. 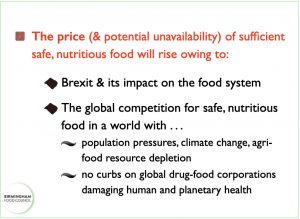 Both Brexit and the global competition for safe, nutritious food will mean steep price rises and, from time to time, acute shortages of some produce. (6)

Note that we import some 40% of our food, more when harvest are poor here. Last year, for example, Defra reported that UK wheat yields were 37.5%% below that of 2019, owing to late planting because of flooding, which was then followed by drought. And we weren’t the only country to have poor yields.

Brexit will affect imports, through non-tariff barriers (NTB) which are costly, and will delay supplies. Our concern is that food imports from the EU27 will decline as EU27 companies won’t bother with the faff and lost revenue NTB paperwork entails when they can easily supply other populations. Our food exports will, too, be affected and thus it’s inevitable some farmers will go out of business.

The global competition for food is already fierce, can only become more intense. (7)

There are two main reasons why: First The global threats to the world’s food supply are, frankly, frightening — population pressures, climate change and agri-food resource depletion; i.e. of land, soils, water and energy, plus the impact of crop pathogens. (8)

Secondly, the specific risks that the global drug-food corporations place not just on human health, but also planetary health too; e.g. in 2012, it’s been estimated that Coca Cola’s global consumption of water was more than the daily needs of over 2 billion people — in a world where the UN estimates 1.8 billion will be living with absolute water scarcity by 2025. (9, 10, 11) 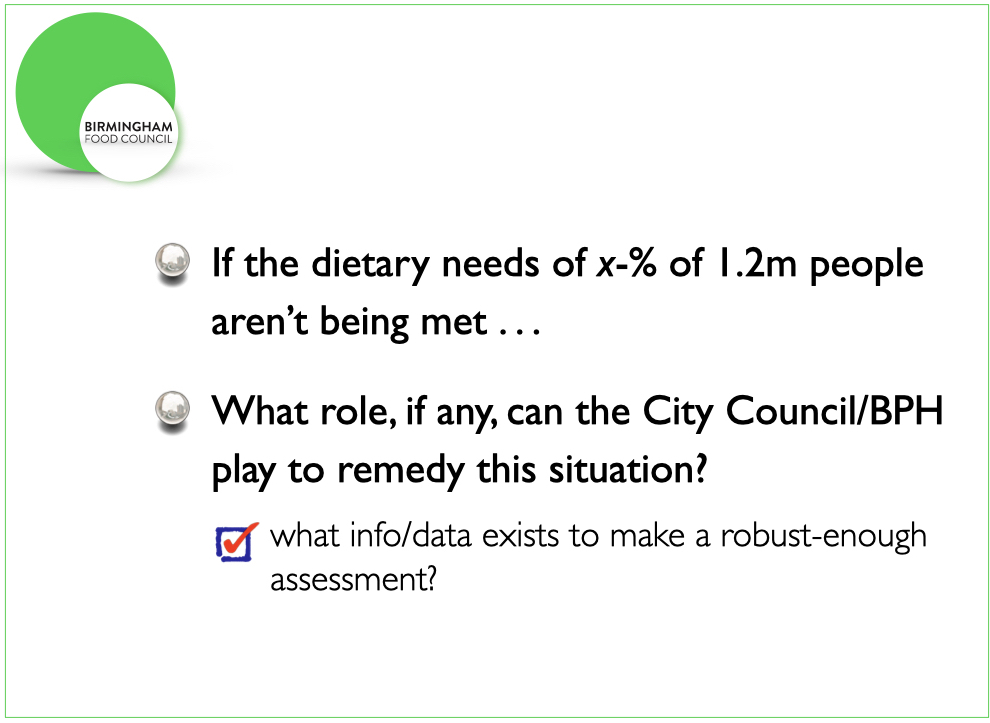 (1) The first time the five-a-day advice was challenged as being insufficient was in 2014 when this article in the Journal of Epidemiology and Public Health appeared by Dr Oyinlola Oyebode (now at Warwick Medical School, then at University College London) and her colleagues. They concluded that that 7-a-day or more gave significantly more benefits; see this UCL press release about the article.

In 2017, a team of researchers led by Dr Dagfinn Aune at Imperial College, London, showed conclusive evidence that, although even the recommended five-a-day reduced disease risk, the greatest benefit came from eating 800g of fresh fruit’nveg a day, equivalent to ten portions.
see their article in the International Journal of Epidemiology, and this Imperial College press release about it.

(2) See: Towards a food strategy for Birmingham (2018), also this comment on a blogpost by a Public Analyst (2021)
note: Owing to lack of resources, the City Council, as others, has a poor record in meeting its statutory obligations; see, for example the this 2015 Food Standards Agencyy report of an ‘unscheduled’ inspection, also their record under the Local Authority Enforcement Monitoring System (LAEMS). Of note, too, is that they haven’t directly employed a Public Analyst for years.

(3) See our Response to the National Food Strategy Call for Evidence, supporting blogpost #12: Local risk and resilience for more information.

(4) Here’s an explanation of why the word ‘poverty’ is problematic. It’s what’s known as a ‘privative’; i.e. denotes something that doesn’t exist. A quirk of our nature is that if we give even a non-existent entity a name, we treat it as though it does exist, often blinding ourselves as to what to do about it. Poverty is sorted by giving people money, one way or t’other. (For more about this fascinating human trait, see  this blogpost: We treat non-existent things as entities: A ‘privative’ is a useful concept to notice when we do.)

(5) Ours is necessarily a commercial food system, thus having the money to participate is essential. Part of our lack of preparedness for Covid was economic inequality leading to disproportionate mortality rates among the malnourished. See also our report on how the UK could be better prepared for future food system shocks, One Scenario: Buffer contingency food stocks.

(6) Two Brexit-related examples from yesterday’s news: The empty supermarket shelves in Northern Ireland, and the inability of Scottish seafood producers to reach their EU27 market. As for climate change, see this frightening report from leading scientists reported in the Guardian.

(7) In this video,Nick Booth interviews fresh produce wholesaler, Parveen Mehta of Minor Weir and Willis, who talks of the global competition for food, This interview was part of our horizon scanning exercise (2017-18), reported  in this project Report: Back from the Future (2018)

(8) Our report Global Risks to UK food supplies (2019) outlines what’s in store for us, along with facts’n’stats and links to other sources of information.

(9) As outlined in this Rapid Response to a BMJ article on nutrition, authored by Professors Jim Parle and John Middleton and myself.

(10) For more stats about environmental damage caused by the drug-food corporations, see What does this food sector ‘balance sheet’ tell us? footnotes 24, 25, 26 and 27.

(11) See also our response to the National Food Strategy Call for Evidence supporting blogpost #15: Drug foods and their specific risks to the food supply system.