This question is about the function of the supply chain, not its physical structure.

When people talk about the food system, they often conflate structure and function. (No surprise there, we judge and have feelings about any working structure  by its  functionality.)

As a means of ‘seeing’ through the complexity of the system, however, it’s useful to be able to separate out the two. Its structure is its physicality, its function is an abstraction, our judegment/assessment (and often, our feelings!) about what it does.

Here’s a model of the food system function space, i.e. what the system does:*

Under each of one these function space headings, there are a multitude of diverse entities in structure space, i.e the ordered pattern of physical elements. In this system, that’s the food itself in its various stages of preparation, plus buildings, plant, equipment, et al.

‘Mapping’ the capacity and capabilities from function to structure space, and from structure to function space,** can be illuminating; e.g.

There’s a busy function space that makes it all happen below the red line: 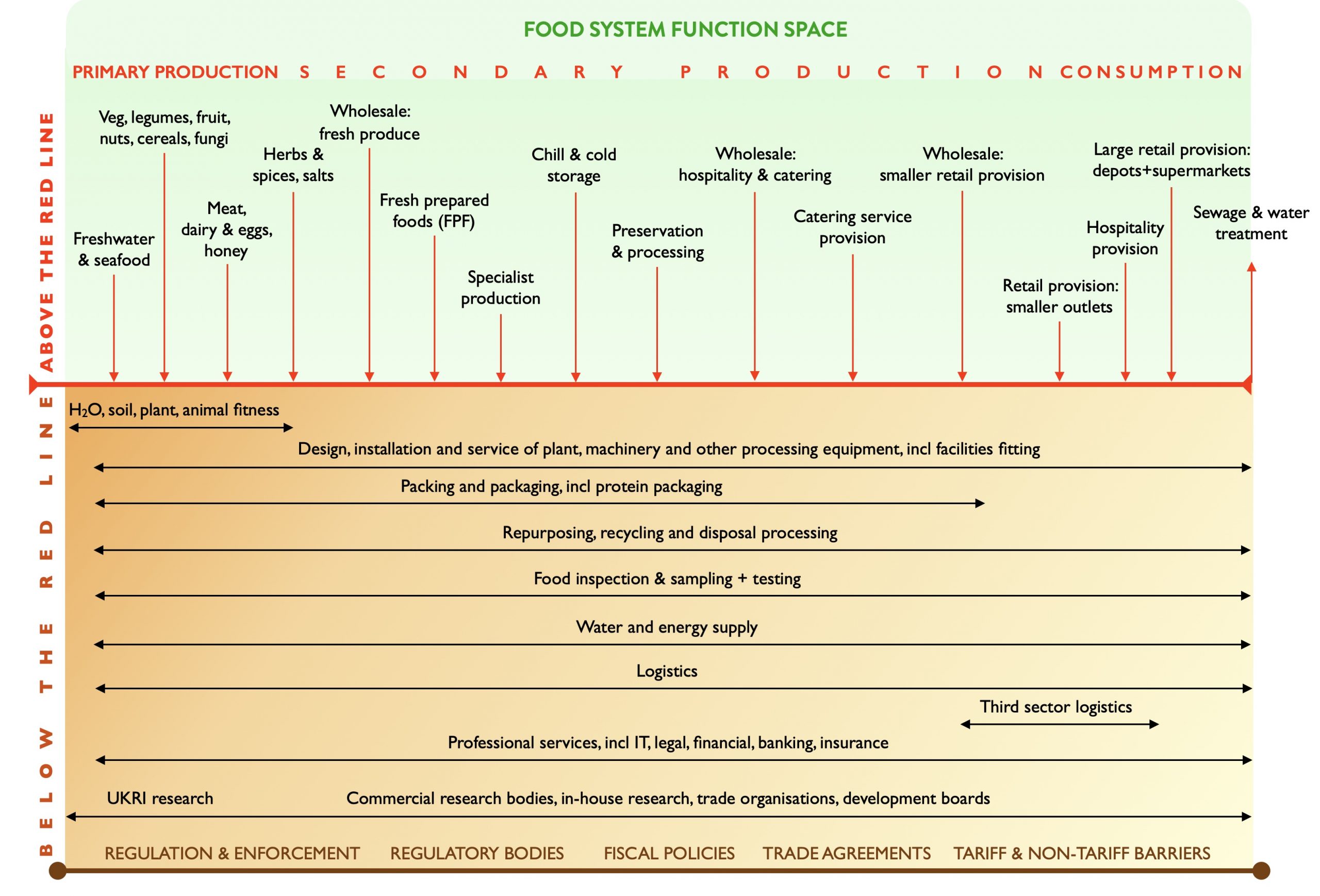 Again, a ‘mapping’ from function to structure space and back again, can prove a useful exercise; e.g.

Possibility space . . .
I first met the twin concepts of structure space and function space over 20 years ago, during my time as subject leader for innovation at the Warwick Manufacturing Group. Both exist within possibility space (the space in which structures and functions could exist, but don’t yet, i.e. the very stuff of innovation.** 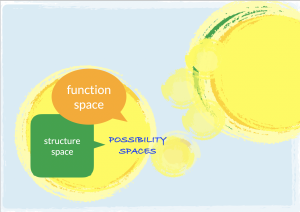 “the space in which structures and functions could exist, but don’t yet“. That is to say, possibility space exists in our heads, not in the world.

Our heads are full of beliefs, emotions and feelings as well as knowledge and ignorance, understanding and misunderstanding.

Making the leap into a new possibility space happens when people’s beliefs, emotions and feelings about the functionality of an existing system or systems structure and/or function can be applied differently.

*The function headings are mine, albeit informed by several people deep within the food supply system. We’re unlikely to have thought of everything and, for sure, you might categorise things differently. It’s only (only!) a model, dammit, so inevitably will fall short of reality. Nonetheless, it throws a new light on what the food supply system actually does.

**An example from those WMG days 20 years ago: At this time, we’d begun to use mobile telephones for talk and SMS, but that was just about it — the first iPhone was only released in June 2007. Both the landline and a mobile provided the function of being able to talk to someone else far away.

The structure space of the two systems, however, was and is utterly separate, and radically different. The mobile telephony structure space opened up not just the functions billions of us take for granted today, but also new structures that led to yet bigger function space; e.g. using an phone app to pay for goods at the supermarket till, unthinkable to most of us 2o years ago or, post-Covid, sending a family Zoom link to so your two year old can chat and share the video she made earlier with her nan and grandad.

A hat doff to Professor Andreas Bonaccoursi of the Scuola Superiore di Sant’Anna in Pisa who introduced these concepts to myself and Warwick colleagues when we were co-designing an innovation strategy programme for an Anglo-Italian client organisation.

And finally, a big thank-you to Clive Reynolds, a former Warwick colleague, with whom I’ve been chewing the function space cud again, so helping me get my mind around this model in relation to the food supply system.

The responsibility for all of the above is, of course, mine.