We can see something is wrong with the food system, and that things have been getting steadily worse over the last couple of decades or so, not least from the seriousness of rising cases of diet-related morbidities (cruelly exposed by Covid), to the horse-meat scandal and on to the pears-from-Argentina-packed-in-Thailand story in the last blogpost.

But what are the driving forces, and what are their effects? In particular, what are the forces driving a worryingly accelerating pace of this degradation since 2010?

In answering that, it’s worth turning initially to the definition of food security set by the 1996 Rome Declaration:

“Food security exists when all people, at all times, have physical, social and economic access to sufficient, safe and nutritious food that meets their dietary needs and food preferences for an active and healthy life.”

(1) Nutritious food
There are several interacting issues playing out regarding the degradation of the nutrient quality of our food supplies, including:

(2) Safe food
For a summary of the issues associated with the safety, integrity and assurance of UK food supplies, see this recent blogpost, The perils of dodgy kebabs . . .

Of concern, too, is that none of the current FSA Board members has professional expertise or experience in food inspections, sampling and testing.

(3) Economic access
A large and growing number of people across the UK cannot afford to buy sufficient supplies of safe, nutritious food. Food banks, uncommon before the austerity measures taken in 2010, proliferated since and before Covid-19 wreaked its damage, as testified by Trussell Trust stats. The Food Foundation’s regular surveys testify to the increasing numbers of adults and children whose food security has been deleteriously affected by the pandemic.

The effects of this situation create a vicious cycle: There is a commercial (and currently, a political) drive to produce food at ever lower costs — which inevitably means lowering the expensive-to-produce nutrient quality of the food on sale. The consumption of these low quality food stuffs then leads inexorably to the rapidly increasing economic costs of diet-related morbidities to society at large; see this food sector ‘balance sheet‘ for recent figures.

It’s also worth drawing attention to three other factors driving the accelerating pace of the degradation of the food system since 2010:

(4) Corporate power
As indicated in (1) above, two groups of corporate vested interests are contributing to the continuing degradation of our food supplies, namely those producing and promoting NOVA Group 4 products and the significant subset of these, drug-food products.

The accelerated pace is because (a) there have been no curbs on these vested interests — indeed, the reverse, some of these corporates are brought in as partners on various campaigns (e.g. Nestle cereals and Change for Life), to work with local authorities (e.g. the long-standing Coca Cola ParkLives programme), to sponsor flagship national events. for example, the Olympics and the 2022 Commonwealth Games (we were asked to support the Games but the organisers weren’t happy with our refusal to be on the same stage as these corporates)  — let alone commercial events where these corporates (and gambling outfits) proliferate as tobacco companies once did.

Plus, perhaps most worryingly of all, the corporates that do so much damage to human and planetary health are encouraged to be industrial ‘partners’ on academic research (e.g. see post about this presentation, with due acknowledgement to Professor Sir Andy Haines for his help with the infographic).

(5) Who gets heard . . .
In 2013, I was startled to be told by a senior PHE official who I knew well, that no-one who mentioned either ‘poverty’ or ‘malnutrition’ would be heard. This was a portent of things to come. For example, the FSA and PHE officers are unwilling or unable to criticise government actions or policy with regard to Brexit, even though any change in our trading relationship with the EU27 profoundly affected the UK’s supplies of safe, nutritious food. The most I ever got was I can’t comment, with a face saying otherwise.

Given that both FSA and PHE are meant to be independent of any government, this was and is concerning. Worryingly, this situation extends to academia. I remember an eminent professor, a world expert in an important field, telling me that careers could be lost for speaking out — not least, because funding would be lost. Conversations with people under Chatham House rules were markedly frank, and reflected deep concern about future food security. In summary, irritating the Government was an unwise move for any individual. And for many, it still is.

(6) Brexit
Shortages and scarcities, already seen here from time to time, will soon become frequent, predictably exacerbated by the effects of the recent fracturing of our EU27 trade relationship.

The Roslings and Dollar Street
For those of you who don’t know about him, let me introduce you to Hans Rosling. Of all matters to which he bent his considerable brainy humanity, perhaps his illuminating TED talks are the best introduction. And my introduction extends to his daughter-in-law, Anna Rosling Ronnlund. She invented Dollar Street, about which read her words here and/or see her TED talks.

Dollar Street takes a subject, and asks people, anyone from anywhere in the world, to upload a photograph of, say, their toilet, or their toothbrush, or bedroom, whatever. The aggregation of these images of people from all over the world, provide insight into how people live according to their income.

What I found remarkable about the photos under ‘eating’ is the following:

The words under each image are his. The diet of the poorest billion in the world is insufficient both in terms of nutrients and, often, of calories too. Moreoever, they do have is under threat from failed harvests, disease, war, name it.

The middle income have a nutritious diet, but can be boring as it doesn’t vary much as it’s highly dependent on local produce. Their diet, too, begins to show evidence of household access to the global corporations producing NOVA Group 4 and drug-food products.

The people from high income countries have a highly varied diet of nutritious food which is both delicious and highly nutritious.

I decided to represent this as The Good, the Bad and the Ugly: The Good and the Bad are both taken from Dollar Street. (Sorry, I didn’t take note of the url of either of them, both were from rich countries.) The “Bad” is, at least in part, a NOVA 4 group product (see this infographic with its listing of the four NOVA groups). The “Ugly” is, as you can see, an image of a lovely little lad partaking a drug-food product.

The Roslings have highlighted the impact of global corporations on the world’s food system, not just that of the UK. Indeed, even in poor countries with unsafe drinking water, people will understandably choose to drink canned or bottled products made by these corporations which, itself, uses up valuable water resources thereby exacerbating the world’s thirst. People’s diet within the high income countries also highlights economic inequalities of these wealthy countries.

None of the above means that national governments cannot or should not take action to curb the power of any global corporation that damages human or planetary health. It can be done; we’ve seen that with the tobacco industry and, more recently, seen the shift of fossil fuel companies in response to the decarbonisation of the major world economies.

note: See the UNICEF Innocenti Report Card #16 (2020) Worlds of Influence: Understanding what shapes child well-being in rich countries, page 15 in which they say: The recent rise in obesity appears to be linked with lifestyle changes and insufficient regulation of food production and advertising, including predatory commercial practices, which could be addressed by governments. Yes, indeed it could.

I finish with a version of the featured image at the top of this blogpost. The annotations summarise why the ‘bad’ and the ‘ugly’ products are increasing their hold on the global diet. Without government action, the global corporations who make and promote these products will expand their malign impact on human and planetary health: 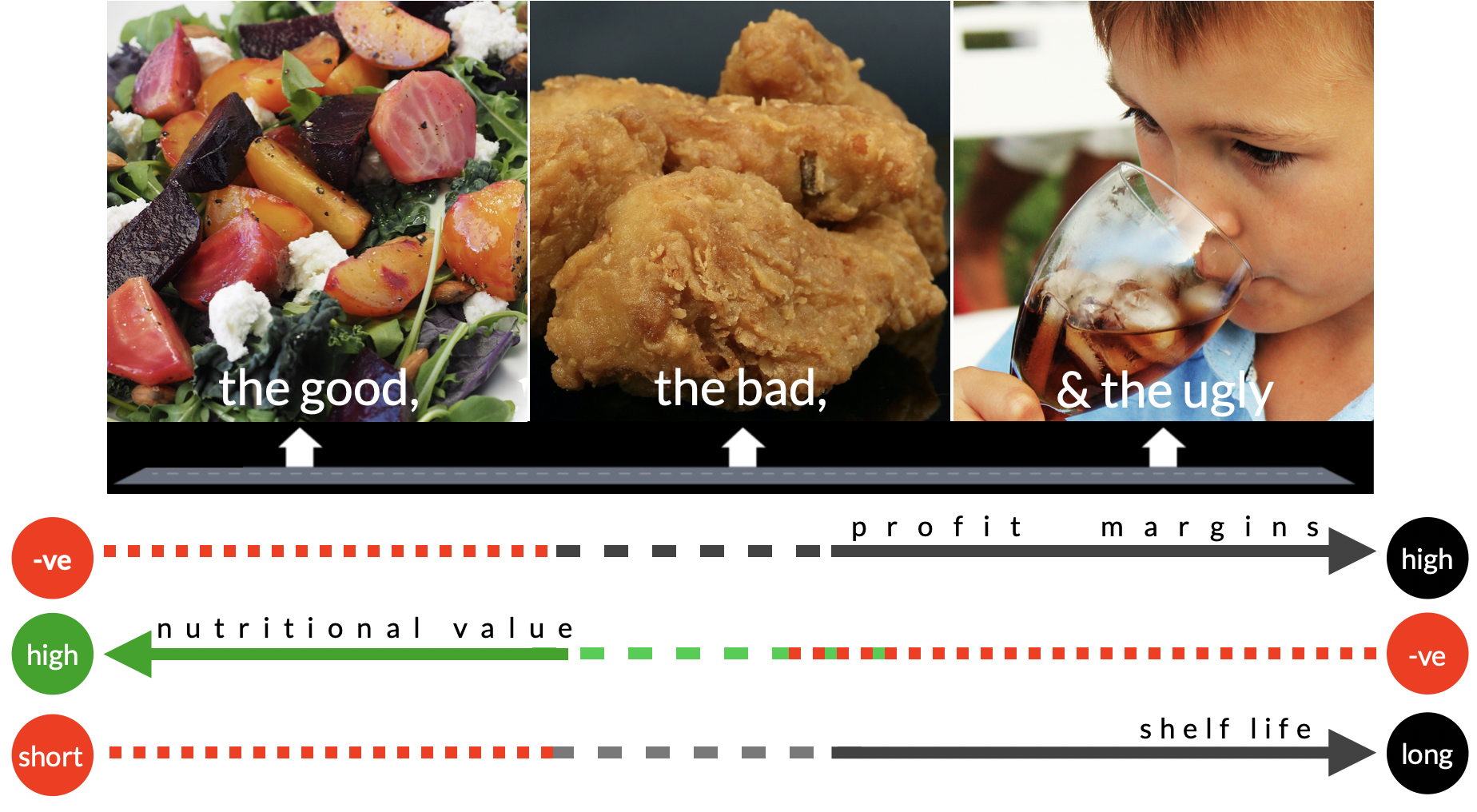