Regarding the first of our five criteria in assessing the National Food Strategy: The answer to this question is no.

I reiterate (yet again!) that the UK Government is a signatory to the 1996 Rome Declaration on food security, which reads thus:

“Food security exists when all people, at all times have physical and economic access to sufficient, safe and nutritious food to meet their dietary needs and food preferences for an active and healthy life.”

Contrast the above with this statement about the Terms of Reference and scope on page 63 of the National Food Strategy Plan: 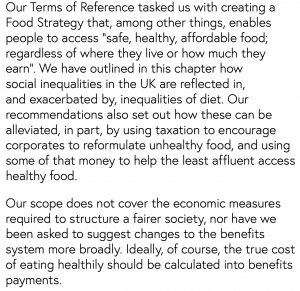 They could have pointed out that their Terms of Reference conflict with the responsibilities the Government had under the Rome Declaration.

(Pointing out the conflict wouldn’t mean, as they claim, that they would need to cover the economic measures required to structure a fairer society, nor to suggest changes to the benefits system more broadly.)

But they chose not to.

In a strategy document. In what is claimed to be an ‘Independent’ Review.

Moreover, it’s not an ‘ideal‘ that the true cost of eating safe, nutritious food is calculated into benefits or, indeed, any other payments.

It’s should be the norm. It should be what happens in a society that values all its citizens, with a Government that fulfils its responsibilities under the Rome Declaration.

Maybe as a result of the three-way conflict between (a) the Government’s responsibilities under the Rome Declaration, (b) the Terms of Reference of the National Food Strategy and (c) the reality of many millions of people already without economic access to sufficient supplies of safe, nutritious food, we get a statement like this on page 62:

note: Many pages of this document catalogue and seek to justify various means, however well-intentioned, to get food to millions of people who don’t have economic access to it. These are tactical responses to a current situation, not strategic choices.*

This statement on page 61 may well be as a result of this three-way conflict too:

As many a pundit says, correlation is not causation.

Yet the authors of National Food Strategy could have provided evidence that x% of the UK population do not have the income to buy sufficient fruit and vegetables for a healthy diet, could have pointed out that this consumption needs to be 9-10 portions a day for a healthy diet, with more veg than fruit, plus what this implies for fresh produce supply systems, and for future economic access given the inevitable price rises owing to the global competition for safe, nutritious food. And what the measurable social and economic benefits are to having a well-fed population in addition to the well-being of individuals.

In a strategy document. In what is claimed to be an ‘Independent’ Review.’
____

Of concern to us, too, are several inexplicable statements about people living in low-income households, such as this one on page 62: People from the poorest households are much less likely to adopt healthy behaviours such as planning and cooking meals because all their energy is taken up in coping with the short term.

*Having plans in place if a supply crisis emerges should, however, be part of the National Food Strategy. Hence our criteria #4: What contribution does this plan make to UK preparedness for future food shortages and scarcities?