None of the recommendations made will curb the power of these corporates, the third of our five criteria in assessing the National Food Strategy.

We don’t underestimate the challenge of taking them on. Or in the difficulties in identifying, let alone facing down corporate lobbying power.

This blogpost has three parts:

These seven statements, highlighted in this screen-grab  of the relevant page, are examined below: 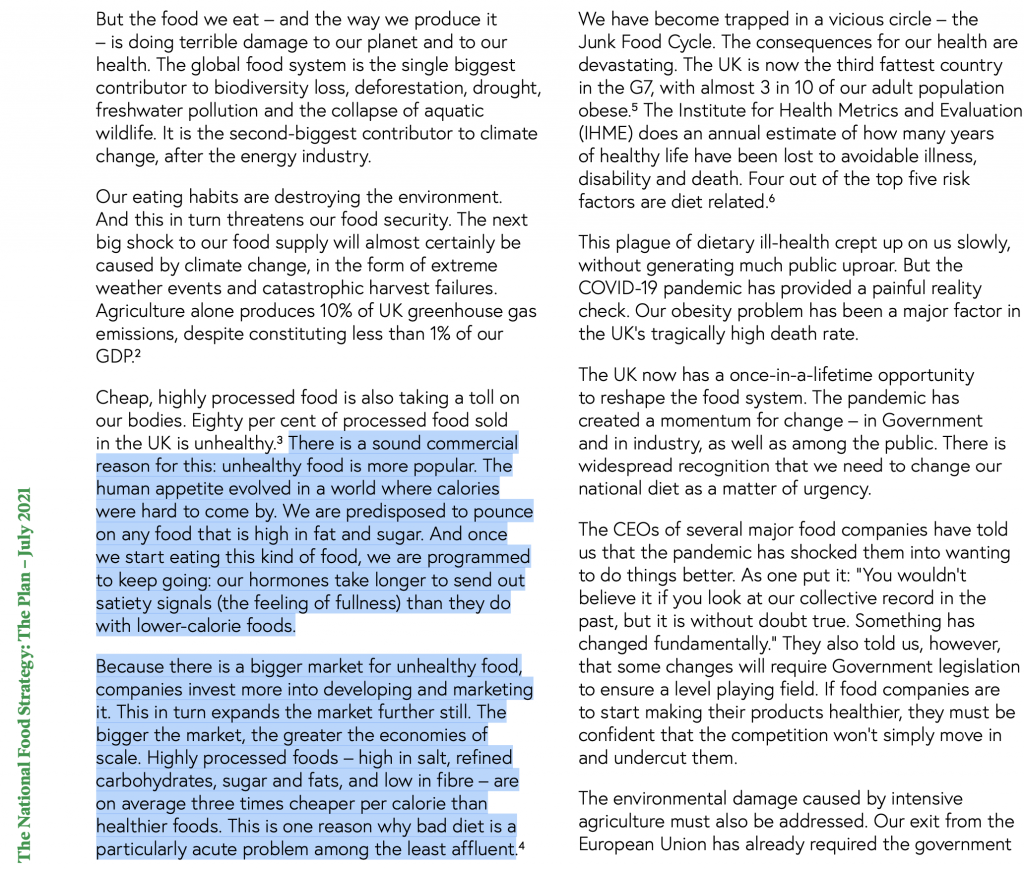 Statement 2:
“The human appetite evolved in a world where calories were hard to come by”


Statement 3:
“We are predisposed to pounce on any food that is high in fat and sugar.”

Statement 4:
“And once we start eating this kind of food, we are programmed to keep going; our hormones take longer to send out satiety signals (the feeling of fullness) than they do on lower-calorie foods.”

Statement 5:
“Because there is a bigger market for unhealthy food, companies invest more into developing and marketing it.”

Statement 7:
“This is one reason why bad diet is a particularly acute problem among the least affluent.”

A brief note about calories, saturated fat and salt in the Statements 1-6:
In his book Spoon-Fed: Why almost everything we’ve been told about food is wrong (Penguin, 2020), Tim Spector challenges some of the assumptions made by the National Food Strategy team.

It is surprising the National Food Strategy document didn’t consider any of the content in this book, given that Spector is listed on page 263 as one of the ‘many experts‘ who have been ‘generous with their time and wisdom‘, and the book is listed on page 273 in their ‘additional reading list’ as one of the key texts we have drawn on in writing this report but are not specifically mentioned elsewhere.

Of particular interest are the following four chapters, and their supporting literature:
— Chapter 3: Calorie counting doesn’t add up. Myth: Calories accurately measure how fattening food is
— Chapter 4: The big fat debate. Myth: Saturated fat is a major cause of heart disease
— Chapter 5: The bittersweet hidden agenda. Myth: Sugar free foods and drinks are a safe way to lose weight
— Chapter 12: More than a pinch of salt: Myth: We all need to reduce our salt intake

Their recommendation 1
Introduce a Sugar and Salt reformulation Tax. Use some of the revenue to help get fresh fruit and vegetables to low-income families

Part 3: A three-stage process to meet the challenge
What could be done can be succinctly summarised thus:

(1) See this BMJ Rapid Response It is time to act against drug-foods, for the health of the population and the planet. 14 September 202o for a definition of what the drug-foods are, the means to identify the corporations that make and promote them, and recommendations as to how their activities can be curbed.

(2) Many people do use the the terms ‘highly processed’ or ‘ultra-high processed’ loosely. Nonetheless, we should expect the National Food Strategy to define the term, as they are using so much. (See also this post on 19th April: How [not] to talk about [ultra-high] processed food in response to a tweet from Bee Wilson.)

(3) There are a range of estimates about the costs of diet-related morbidities, the lowest of which (based on 2014 figures) is £96bn. See our post: What does this food sector ‘balance sheet’ tell us? (July 2019).

(4) Fiscal measures are already used to curb corporate behaviours and reduce demand for alcohol and tobacco products, and for fossil fuels. The participants on our 2020 scenarios exercise proposed an Excise Duty on food and beverage products that carry standard-rate VAT, and a Food Resilience Levy, similar in remit and purpose of the Climate Change Levy; see page 3 in One Scenario: Buffer contingency stocks (November 2020).

(5) See our report: What works: Regulation or voluntary schemes in the food sector? (2015) which gives results of research by the RSPB.

(6) Our concerns are explained in this post: The perils of synthetic ‘food’ products and cheap carbs.

(7) Hence our recommendation for a independent UK Food Security Institute here (2018), and a Committee on Food Security here (2020)

(8) See again the BMJ Rapid Response It is time to act against drug-foods, for the health of the population and the planet cited in footnote (1).