In the risk table at the end of the previous blogpost in this series about the National Food Strategy, we made the point that people with diet-related morbidities are exhorted to change [their] behaviour, rather than given support and action taken against the companies that make and promote health-damaging products.

If, for example, you don’t have the money to buy sufficient safe, nutritious food, you will not have a healthy diet. Or if you are addicted to the foods that harm health, you will later if not sooner have one or more diet-related morbidity. It is thus inappropriate to sneer at their situation, or blame them for what they’re eating, as is seeking to do something to them to remedy them somehow, rather than the circumstances in which they find themselves..

Surprisingly, the National Food Strategy does not refer to Professor Dame Sally Davis’ 2018 Annual Report as Chief Medical Officer (CMO). Of her 15 recommendations, five were directly concerned with the food we eat, and two others (about multi-morbidity) had implications for the food sector. Nor have they referred to her last report as CMO published in October 2019: Time to solve childhood obesity: An independent report by the Chief Medical Officer.

The National Food Strategy has not grappled with population-level interventions, nor has recommended any measure that will reduce the vulnerability of those who, don’t eat sufficient nutrient-dense foods and/or consume too many calories.

An alternative approach is to build collective resilience.

We’ve witnessed the power of communities to respond to food shortages and scarcities during the pandemic.

But, as Reicher and Bauld also say, relying on communities to respond isn’t [good] enough: 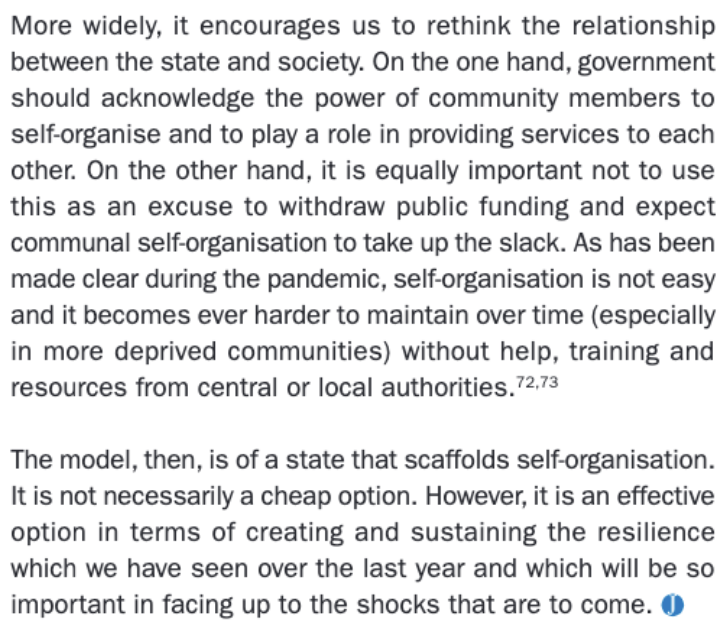 Although the word ‘community’ appears over 50 times in the National Food Strategy, all are used in passing, or quoting a reference title. None reflects the humanity of or power of social relationships, or to any element of collective resilience, or a model in which the Government, to use Reicher and Bauld’s term, ‘scaffolds self-organisation‘.

For an example of how communities could come into their own in times of food shortages and scarcities, given appropriate ‘scaffold’ support to self-organise, see the  page 5 of UK preparedness for future food shocks, One Scenario: Buffer contingency food stocks, an imaginative but entirely feasible example of what collective resilience could loom like.