Our latest Annual Report is an unsettling read. One of our reviewers described it as “frightening, stomach-churning”.

As we say at the beginning of our Annual Report, socio-political decision-makers need to be planning now for the inevitable shortages and scarcities coming our way all too soon. Worryingly, few appear to have even a slim grasp of how the food supply system works in good times, let alone in bad.

The Annual Report also presents this info-diagram outlining the huge wide-ranging risks to our food supplies: 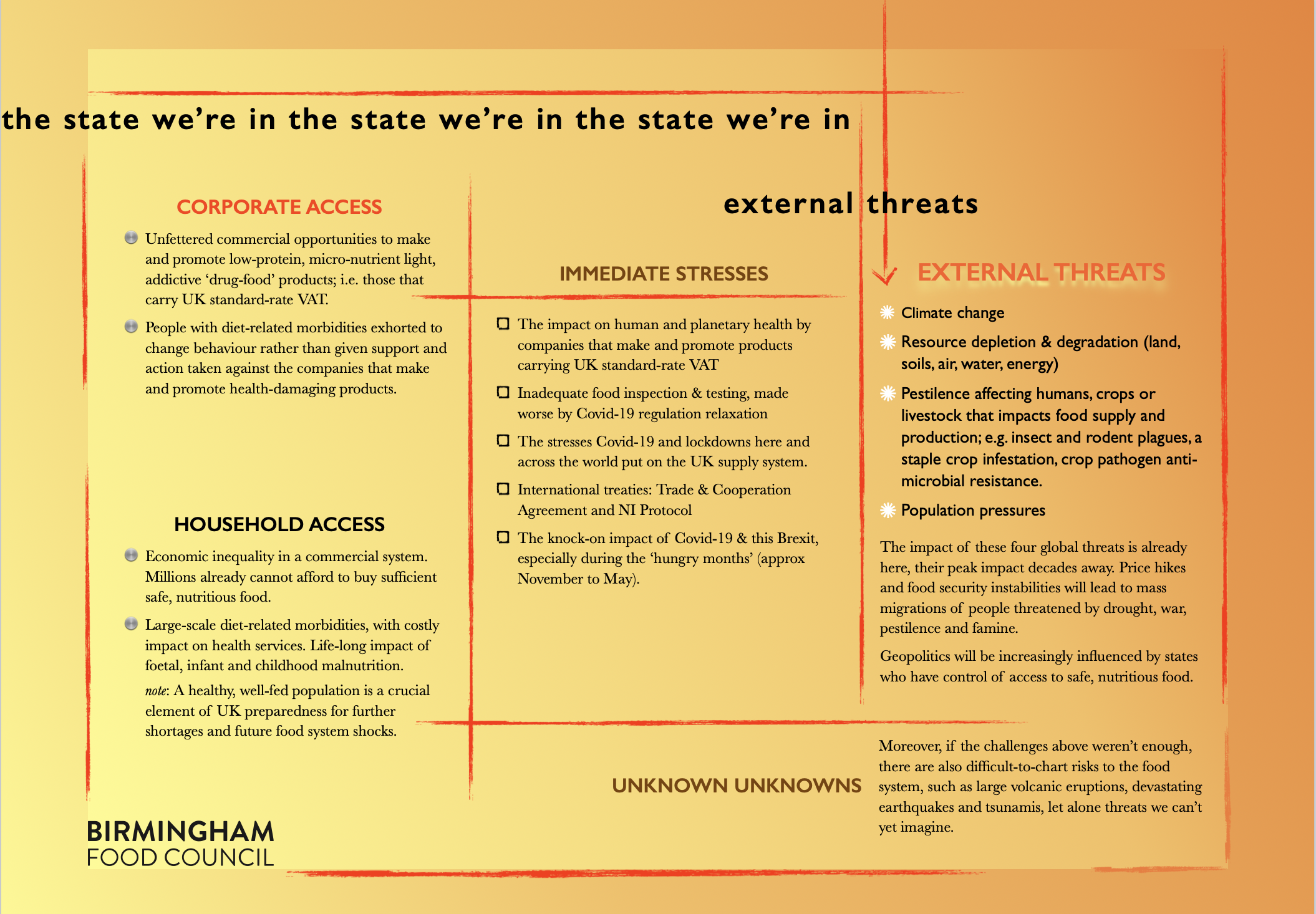 Socio-political decision-makers could be far better prepared for the future, as we point out on page 3 of the Annual Report. The participants on our scenarios work last year devised model of a distributed buffer contingency stock system that, they assessed, is not only desirable, but essential. And feasible, too, as the summary diagram on page 3 indicated, providing, that is, the central Government steps up to the mark: 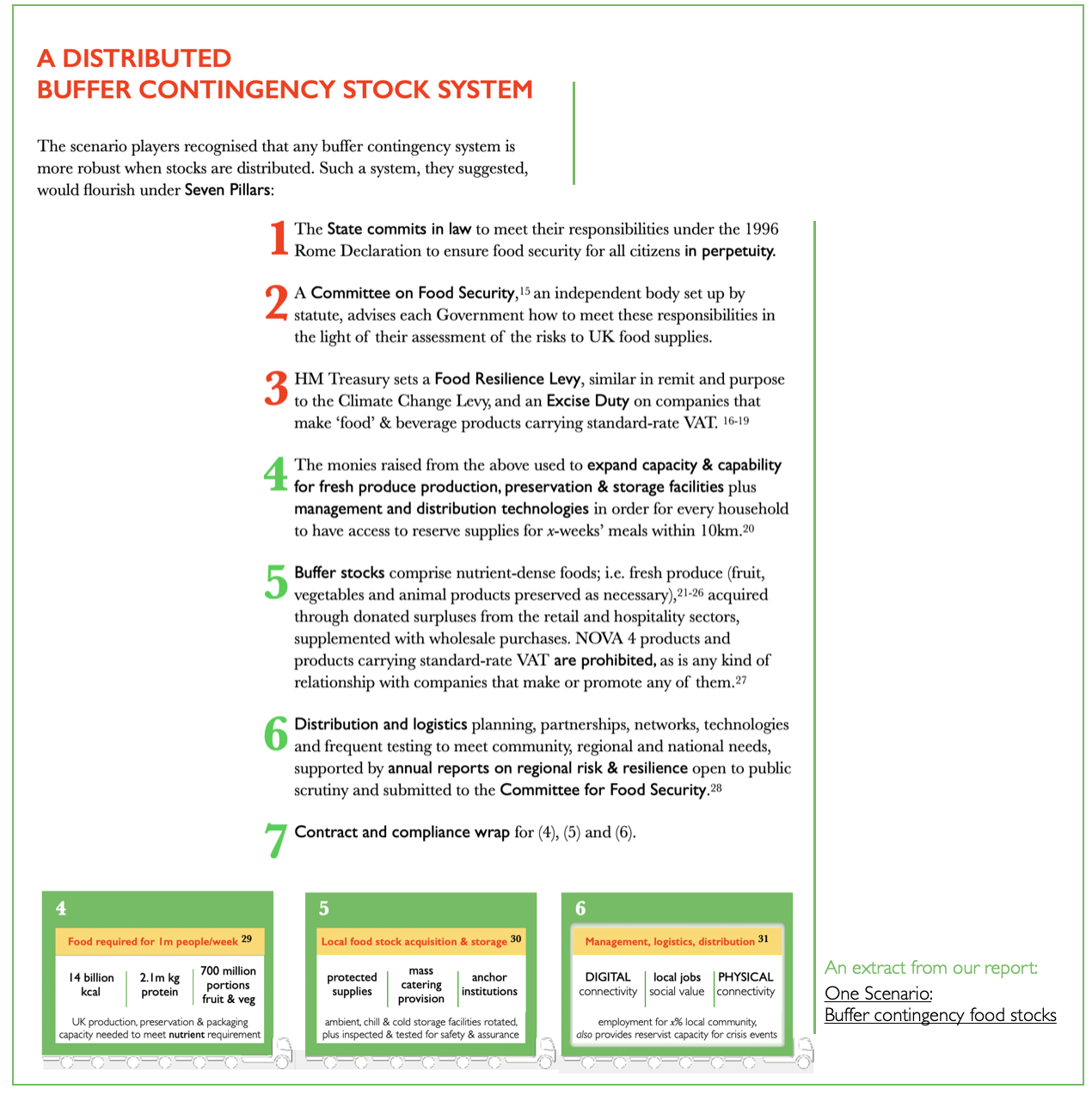 We also reported on the suite of thinking tools we’re creating to aid socio-political decision-makers better understand the scale, complexity and dynamics of the food system, from the agri-food landscape to the meal in front of you. They are outlined in our recent Shining a light on the food system series of papers, and in various blogposts such as these.

One of these tools, this function space map of the food supply system is replicated in the Annual Report: 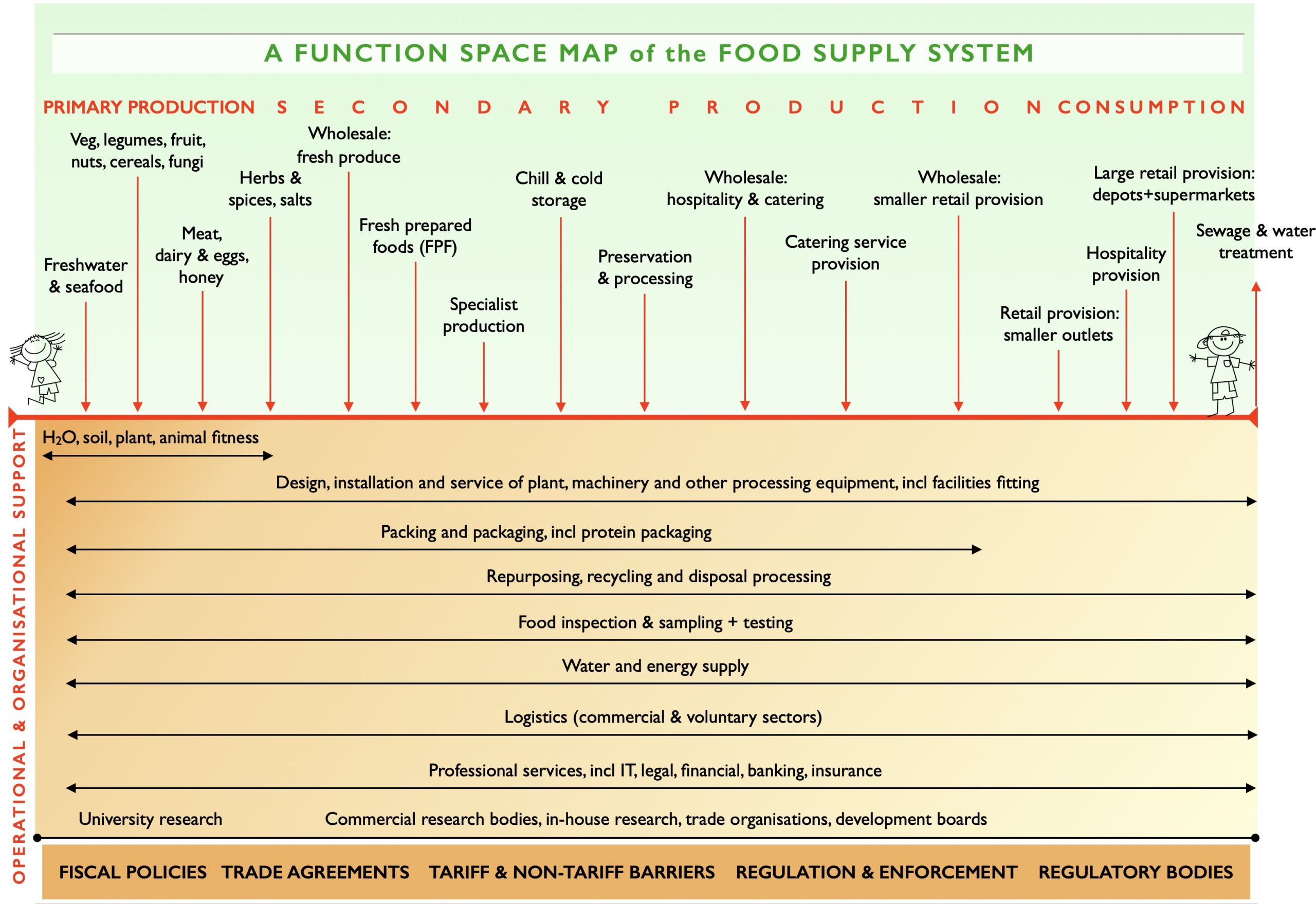 Our work on identifying the drug food corporates through the UK VAT system continued through the year. Of note, Professors Jim Parle and John Middleton, along with myself, co-authored a Rapid Response on the matter in the BMJ, It’s time to act against drug foods for the health of the population and the planet. At the time of compiling the Annual Report, it had 27,000 views.

The image illuminates what we mean by drug foods, and an extract from the Rapid Response giving our recommendations. 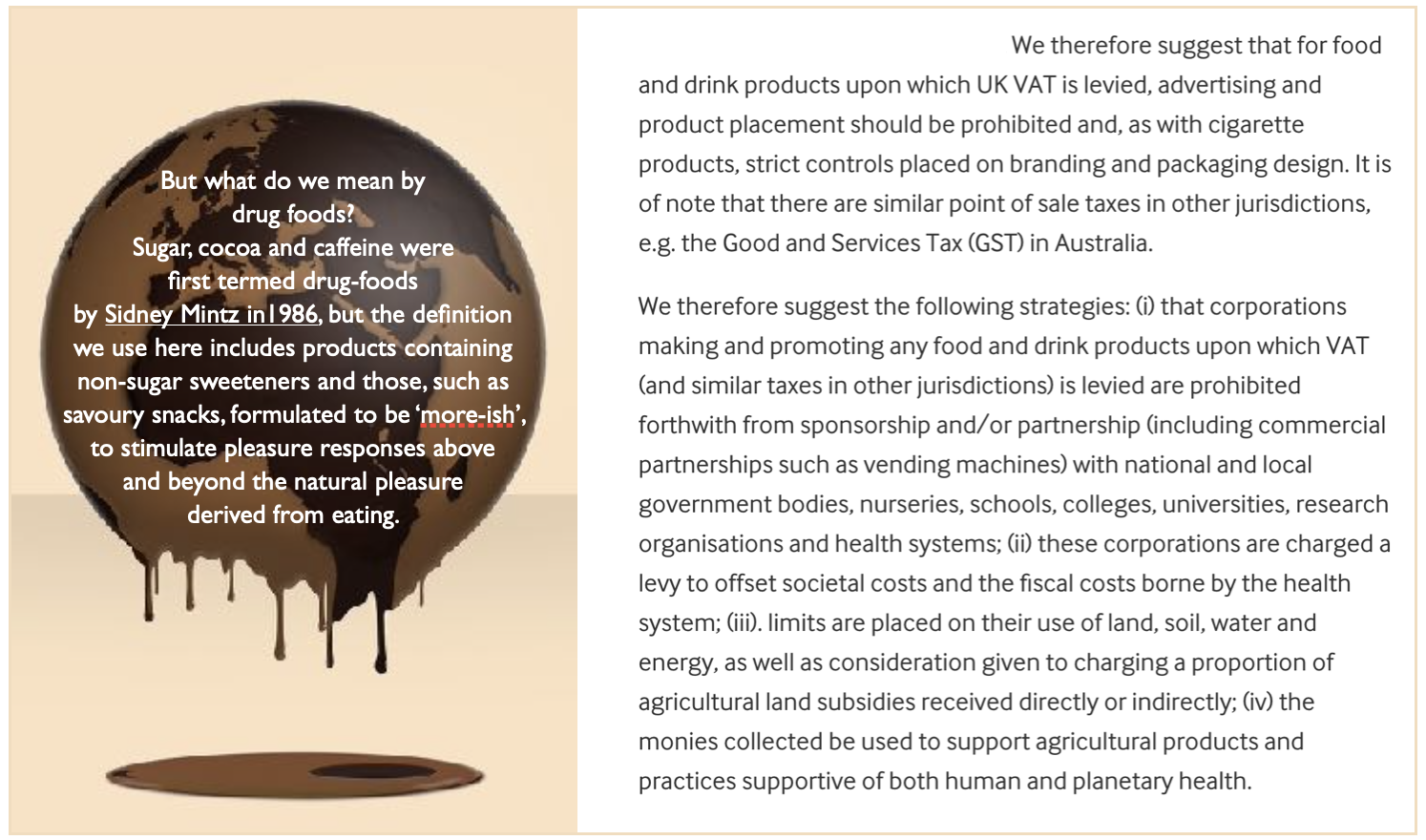 As we point out, this VAT-related work fits with the latest research on diet, notably two sources: The first is Professors Tim Spector and Chris Gardners’s ‘myth-busting’ work on diet, summarised in Tim Spector’s best-seller Spoon Fed: Why almost everything you’ve been told about food is wrong.

The second is some illuminating work by Professors David Raubenheimer and Stephen Simpson. They have put forward the Protein Leverage Hypothesis which confirms and expands what we’ve been saying. Their book Eat like the animals: What nature tells us about the science of eating is a layperson-s guide to their work.

The Professors were kind enough to comment on drafts of our infographic to explain what foods to stock and prohibit for buffer contingencies. Although there wasn’t room in the Report to include it, I have replicated it below; fwiw: the example calculated is for Donald Trump: 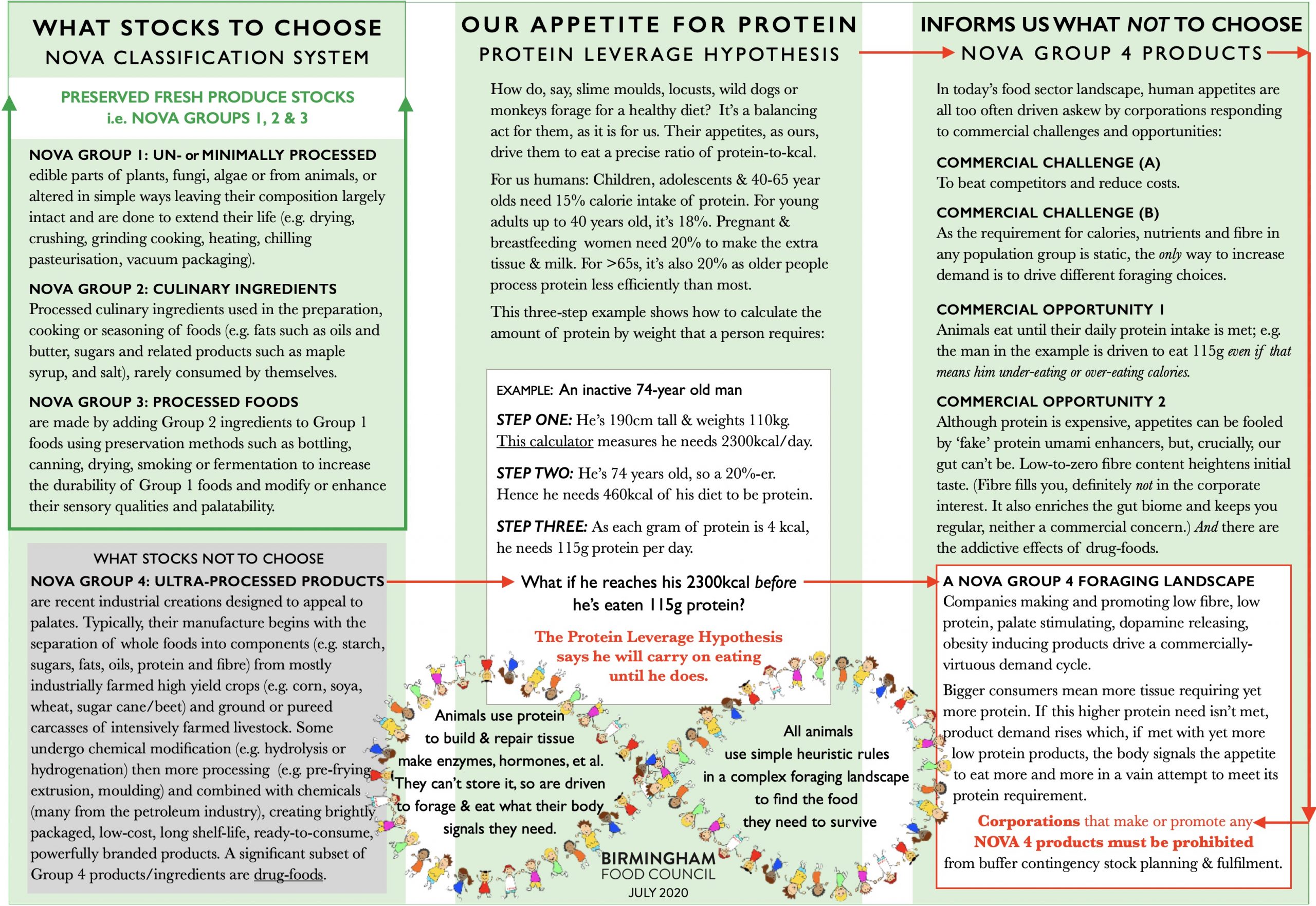 Although we were unable to continue our project to raise food hygiene ratings across the city, we did monitor what happened regarding food safety, assurance and integrity. Regrettably, the UK which once had one of the safest food supply systems in the world, is now subject to a potentially lethal mix of the Brexit this Government has implemented, Covid-19 and decades of underinvestment. As we report:

Below is the final section of the Annual Report, replicated in full. It starts with a pertinent question, given the crisis situation we’re finding ourselves in today. It also highlights the grave limitations of the Healthy Food City initiative here in Birmingham, and Part One of the National Food Strategy:* 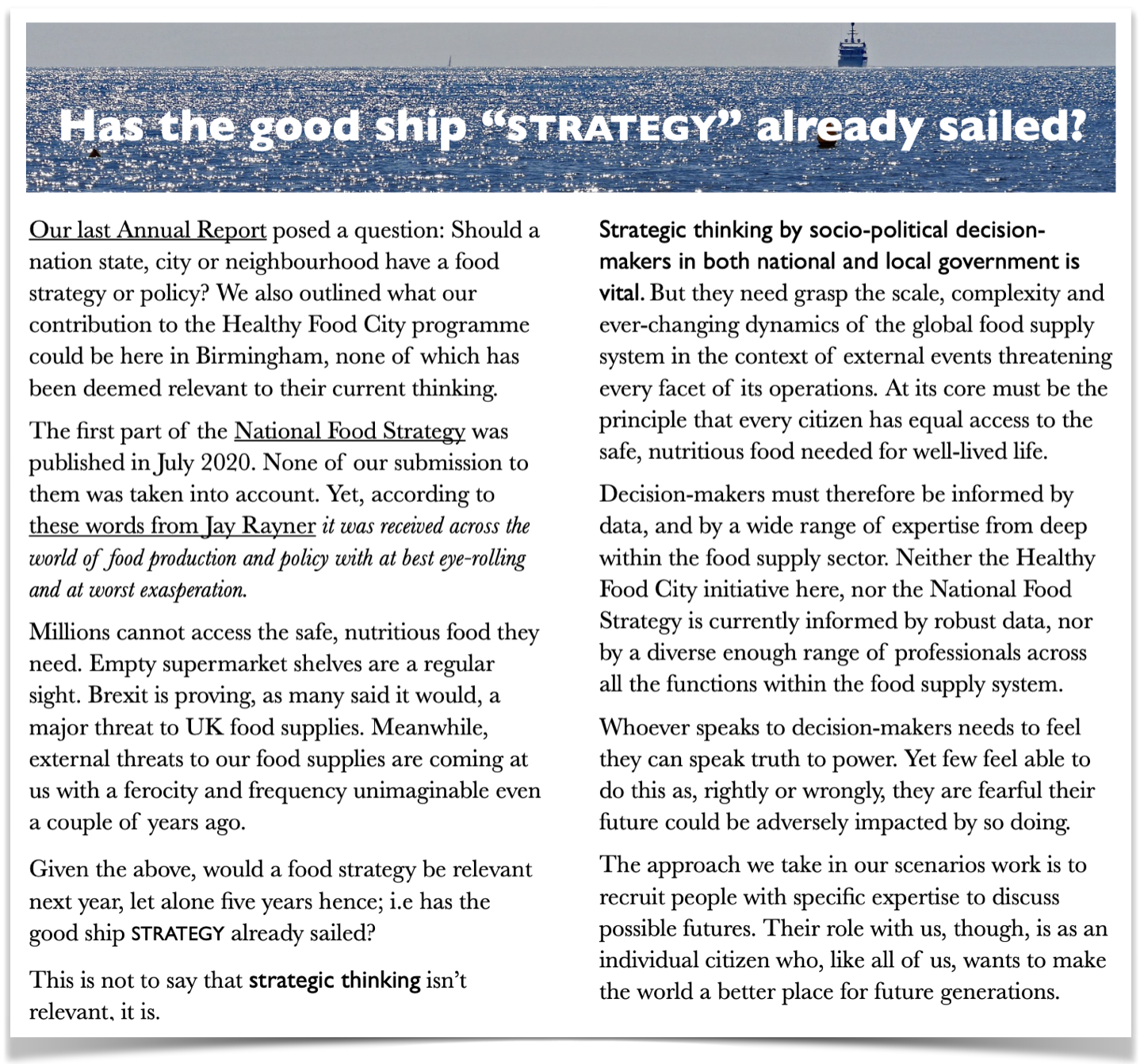 We conclude the Annual Report with this summary of our work to date replicated below, plus a list of our Board of Directors and our Panel of Experts: 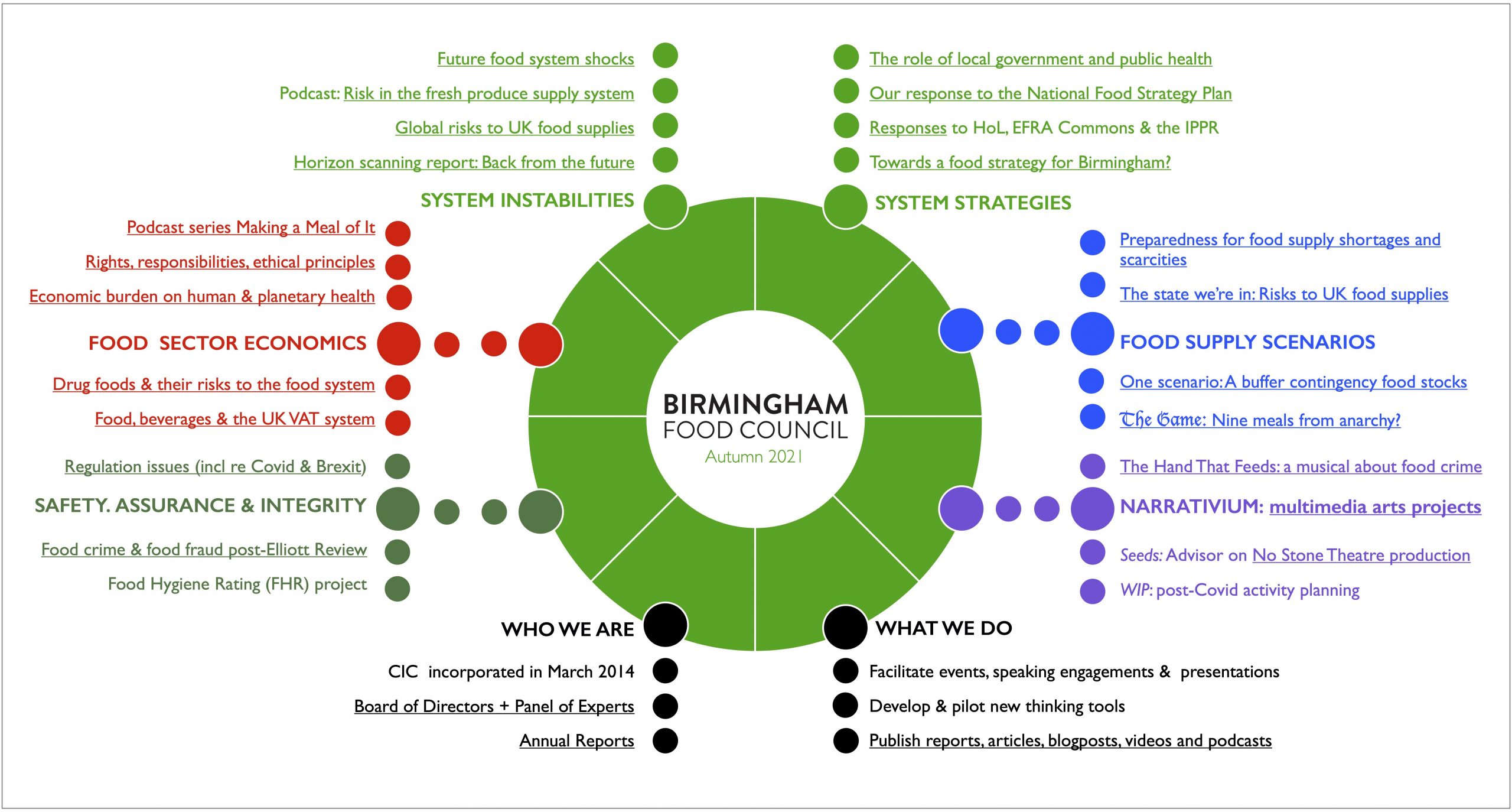 * This series of blogposts is on our response to Part Two of the National Food Strategy, published in July 2021.