This is the first of a blogpost series on the presentation I gave to the virtual (Zoom) Lunar Society meeting on 12th January entitled Food Security: Is the UK already in crisis?

I began with this tweet from Chris Packham from last June: 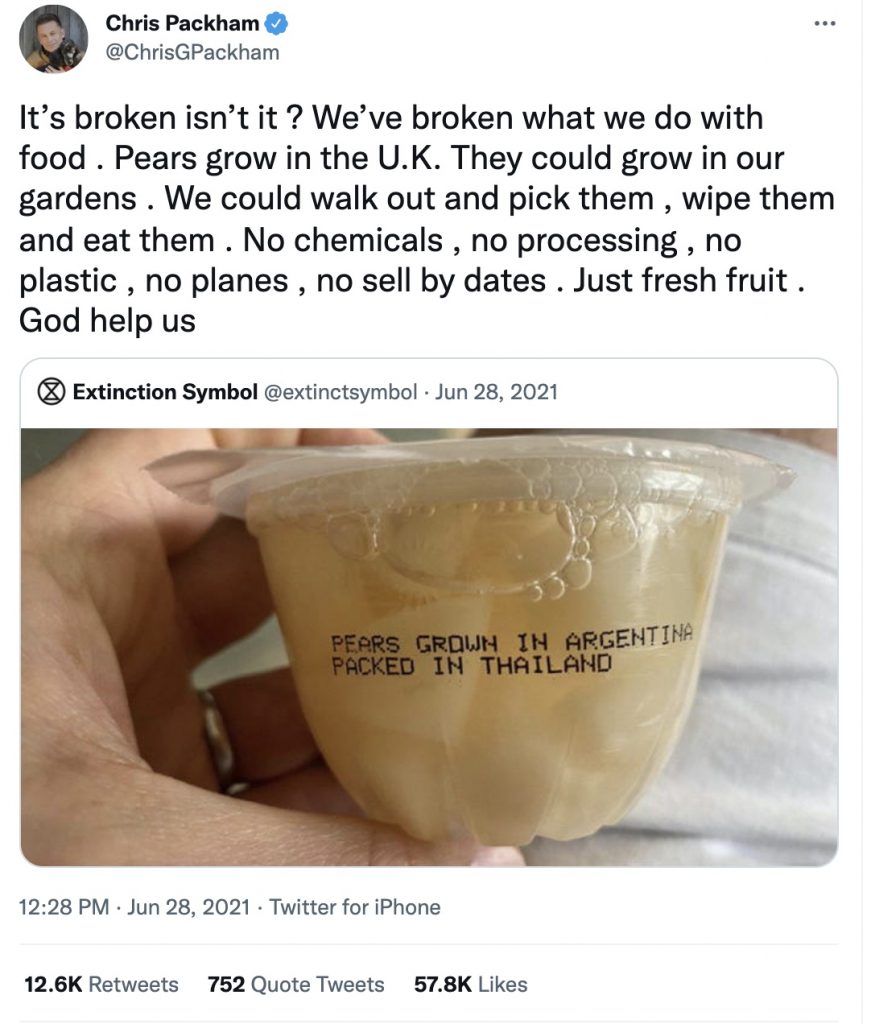 We don’t describe what we see, we see what we describe. In this instance, 57.8K people liked what he saw.

Does his first statement match the image: It’s broken, isn’t it? We’ve broken what we do with food.

Or is it evidence of a system that is working?

Pears, a highly perishable product, were picked from one or more orchards in Argentina. The produce was necessarily handled carefully so it didn’t spoil during the journey to Thailand, perhaps picked early as pears will ripen after picking.

That ripening process must have been slowed down, either by refrigeration and/or being kept in a controlled atmosphere with lower oxygen levels, perhaps nitrogen instead. Think, too, of the two kinds of plastic that had to be manufactured and moulded, one with adhesive to seal the package, the other with printing on it.

Think, too, of the logistics of it all, the means of transit, the containers, depots, the inspections, the border controls, not only to get the produce from South America to South East Asia but from there to the UK. Think, too, of the contracts, and the paper work and the how ever many people involved.

All of the above happening so that this photo could be taken . . . and, I hope, the carton contents eaten and not wasted.

What does he mean by the rest of the tweet?

Is he suggesting that we grow our own (1)?

That, somehow or other, a tree in your garden, which, in the very best of years and probably ever other year, will produce about 500 pears all ripening in the same couple of weeks, can all be safely harvested, stored and eaten? It’s much more likely that the crop ain’t that good, and becomes an insect-fest, wasps galore getting belligerent, as many humans do, on fermented fruit juice.

Or he is advocating subsistence farming with all the risks associated with failed harvests and ensuing hunger, even famine, let alone the sheer labour involved?

Or is what’s in his mind something further back in human history, something akin to the Garden of Eden? (2) (3)

As you can see, Chris’ original tweet did rounds again recently, and garnered this response about our response to it on 1st July 2021 from @dangrech:

As this packaged fruit photo does the rounds again it's worth reading this post by @BhamFoodCouncil… https://t.co/iubAC392QK https://t.co/gIsH3ca400

note: This link takes you to the blogpost @dangrech is referring to and the image below starts it off:

My take on the image is evidence that it is not broken, far from it.

But, is it in crisis? And if so, what can we do about it?

(1) See this blogpost on the topic: Why talk of grow-your-own (GYO) is irrelevant and unhelpful.

(2) On humanity’s shift from the Garden of Eden to agriculture, I can’t recommend James C Scott’s Against the Grain highly enough. Alternatively, you could spend a couple of minutes reading about it in this blogpost: The natural environment cannot be restored — and what’s ‘natural’ about it anyway?
(Scroll down to an image of a combine harvester and the section headed 2: The barbarians lose out against the grain.)

(3) There’s more on this topi, and much else besides, in David Graeber & David Wengrow’s The Dawn of Everything. (Reviews: Guardian here, The Atlantic here.)

(i)
SM: Please could you comment on the fossil dependency of the Argentinian-Thai-UK supply chain?

(ii)
AM: Kate, the packaged pears might be great storage but the carbon footprint is insane. We have to account for the climate impact the food supply chain, because the feedback loop creates instability in supply.

KC: In my earlier blogpost cited by @dangrech, I made this statement: “Embedded in pears grown in Argentina and packed in Thailand and sold wherever takes a heck of a lot of energy.”

I’d add, too, there are all sorts of trade-offs in every (every?) aspect of the food we eat. How big is the carbon footprint in this example? I dunno. More to the point, no-one knows.

Yup, it does seem as though it’d be huge. But all sorts of counter-intuitive things go on in complex systems; by there very nature, they are opaque. (4)

For example, t’other day, I heard someone talk about how disgraceful it was to have British-grown tomatoes on sale at this time of year, think of the carbon footprint, etc, etc. But those tomatoes might well have been grown in Thanet Earth, literally a GCSE case study. (5) (6)  and finally, (7)

(4) See pp 3-6 of Shining a light on the food supply system: Its scale and complexity.

(5) And there are, of course, cons as well as pros in upping the UK’s horticultural productivity.

(6) And whether or not tomatoes, or any other crop, grown in water with added chemicals (7) is as nutrient-dense as crops grown in good soils with all their structural & living diversity is a moot point.

(7) Chris Packham’s two words, ‘no chemicals’ . . . besides which, what does he imagine pears or, indeed, people are made of?

The next blogpost is about how we can assess whether or not the UK is already in crisis.

This blogpost is the first in a long series, others all listed in this link: Food security: Is the UK already in crisis?

2 thoughts on “Part I: Pears grown in Argentina, packed in Thailand”