As stated in the previous blogpost, it’s useful to think of the function of the millions of organisations and people operating across the food supply landscape.

And that’s where the function map comes into its own. It’s explained in this short video.

In this blogpost, we take the map itself to give a couple of examples of how it illuminates what’s happening. (1) (2)

Example 1: What isn’t on the map: Local government 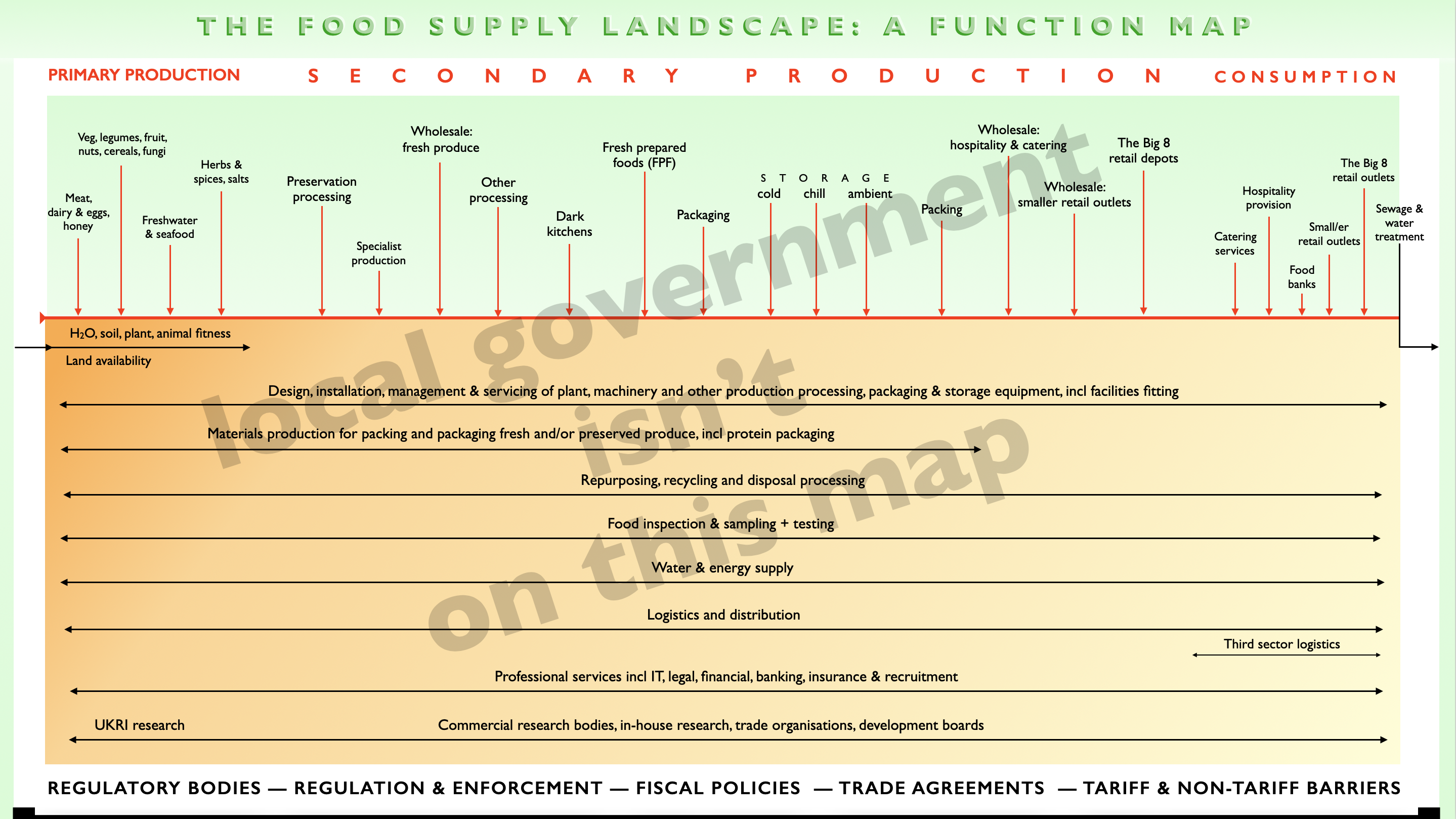 In the UK, local government doesn’t have a governmental role in the food supply landscape; all the elements at the bottom of this map (black type on white background) are the function of national government.

Local authorities do have statutory duties for food safety, inspection and testing (which they haven’t had the resources to carry out over the last decade or so), and for parts of the waste disposal function (3) , plus a few de facto largely inconsequential infrastructure decisions.

Public Health and health care providers are faced with the consequences of diet-related morbidities, but currently do not have the powers to reduce them.

And an unspecified range of local government organisations have duties under the Civil Contingencies Act to provide risk and resilience plans, none of which currently have plans regarding food shortages and scarcities. (4)

That is not to say that local government and public health don’t have a role to play with regard to the food system.

They do, as explained in this report: Shining a light on the UK food supply system: The role of local government and public health and in this article A surprising new role for local government in the Municipal Journal last December.

All the above begs the question about what strategies, if any, local government organisations could take regarding the food system. We’ve suggested a criteria-based assessment of any local food system planning; see Assessing the Birmingham Food Strategy.(5)

As explained in the video, they have to deal with all the food we don’t digest and flush down the loo — they’ve been in the news recently for putting untreated sewage into our rivers and the sea.

For an insider view on all of these matters, listen in to the fourth in our podcast series, an interview with Emily Timmins of Severn Trent:

(1) You can find an unannotated version of the function map here.

(2) The next blogpost gives three more examples of using the function map. The following one (Part 13)  is about two events (CO2 and Covid) which greatly affected food supplies, but originated from outside the food system itself.

(3) We can’t comment on waste, or food waste, not our bundle! We focus where others don’t. There are many organisations who do work on waste disposal, including food waste. Two useful starting points: the Environment Protection Act, 1990 which sets out local authority statutory duties, and WRAP.

(4) On this topic see City level responses to food insecurity, one of our supporting posts in our Responses to the National Food Strategy Call for Evidence in 2019.

(5) See also our criteria-based assessment of the National Food Strategy Plan, 2021.
Before you do so, take another look at the function map, and notice what functions the national government has.

GR comment:
Feeling a greater connection to the means of production feels important to me, from a socio-cultural perspective, yes, but also because there is a failure to understand the complexity and interdependency issues.

Response:
That’s why we created this function map. It is complex, and the whole shebang interconnected. And it’s so much more than farming, so much more than secondary production. It’s everything below the red line, too!

ST question:
What exactly should the role of food influencers be on the “food crisis”? I mean chefs, food writers and specialist UK growers.

Response:
Why these three groups?

Whoever they are, they need an in-depth grasp of their part of the system (and recognise the limits of their perspective; e.g. a supermarket exec may well think food safety not an issue as they have rigorous checks, but what goes on in catering services and the hospitality sector is opaque) and/or a broad understanding of the system as a whole, as many operators below the red line do have.

One food writer, Jay Rayner, does understand the system well. I strongly recommend his book, A greedy man in a hungry world: Why (almost) everything you thought about food is wrong.

This blogpost is the eleventh in the Lunar Society series; others are listed in this post: Food security: Is the UK already in crisis?