The last blogpost has two examples using the function map. This blogpost gives a third, fourth and fifth example.

Underpinning all three of them are the climate and terrain of the UK.

I’ve highlighted four elements below the red line in this annotated version of the function map, which highlight the interactions between land, soil, water, banking and insurance functions: (1) 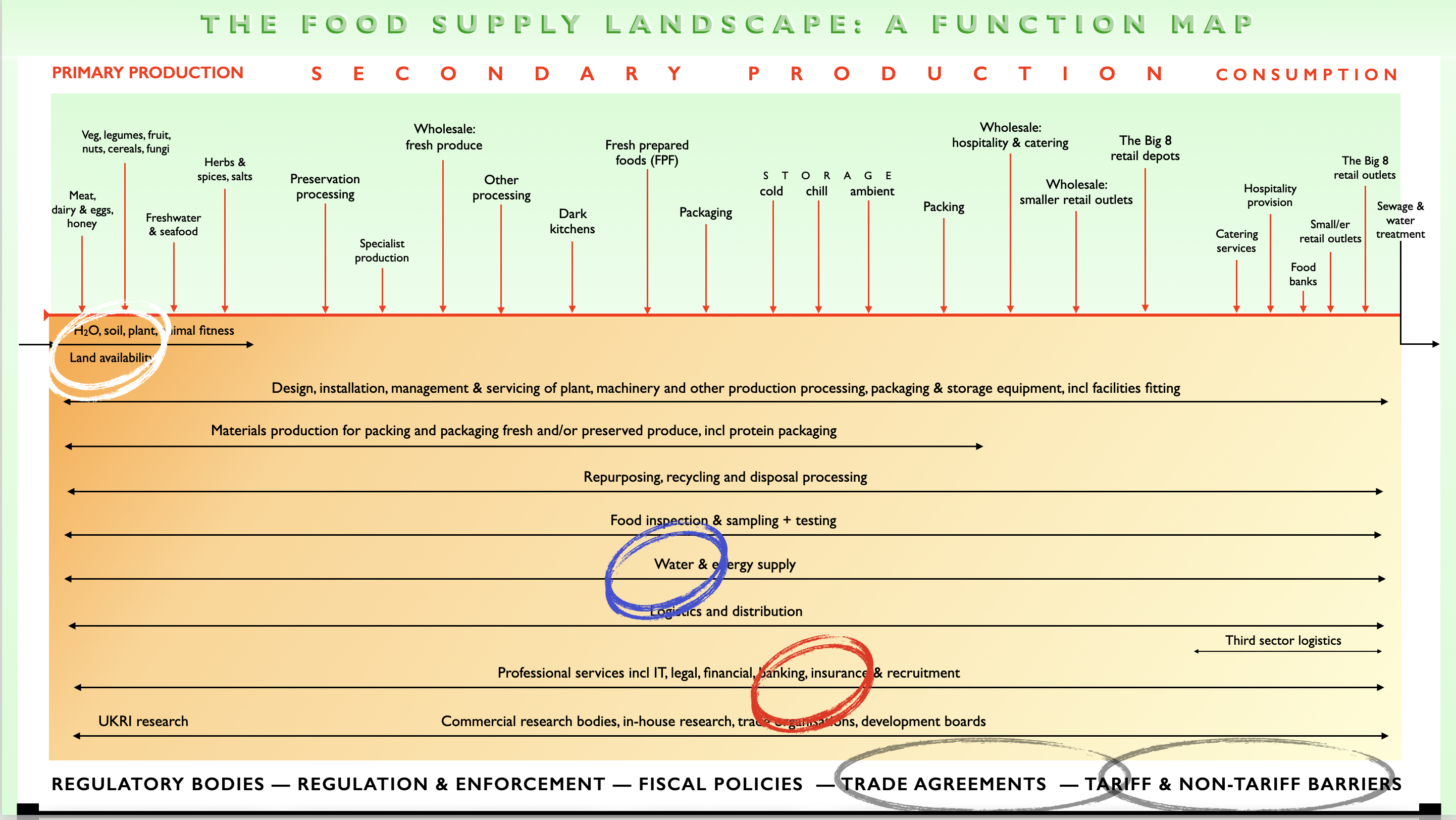 note: You might well highlight other relevant functions, such is the interconnectedness of it all.

Example 3: White circles: land and soil quality
Both soil depth and quality determines what a primary producer can grow.

Crudely put, the best soils are good for horticultural products. Arable crops, such as cereals, require good soils, too. Hence the concern about the 1-3cm top soil loss per year in East Anglia, often referred to as the ‘bread basket’ of England. (2) (3)

Remember that the UK terrain means we have limited space to grow arable crops. This, and our dense population, means that if harvests are adversely affected, we have to source of requirements elsewhere. And I’m sure you don’t need reminding that the frequency and ferocity of extreme weather events will increase.

What are the implications of such an event, and others like it, for the insurance sector? And what are the knock-on impact of their decisions on primary producers? Lloyds of London’s 2015 report outlines what they were thinking then: Food system shock: The insurance impacts of acute disruption to global food supply (summary); full report here. (5)

Example 5: Grey circles: Trade agreements  . . . . this Brexit, plus our terrain and climate
A lot of fresh produce simply won’t grow here at any time of year. Little can be grown during our ‘hungry months‘ which runs from November through into May.

Add in the full force of this Brexit happening in midwinter, with its impact on imports (let alone exports) and on the labour force, and it’s no surprise that there are price hikes and empty supermarket shelves.

note: Brexit has the potential to significantly change regulation, has already changed fiscal policy (e.g. with the ending of the Common Agricultural Policy) with, as yet, unknown effects. Of immediate concern, though, are the huge barriers to trade with our most important trading partner, the EU27, along with the loss of freedom of movement hugely already affecting logistics, processing and harvesting . . . (6)

(2) Re: top soil loss, see the Climate Change Committee Progress Report to Parliament 2015; also pp33-38 of the CCC Managing the land in a changing climate: Adaptation Sub-committee Progress Report 2013. Note, too, p10-11 of the 2017 GFS report on Environmental tipping points and food system dynamics which describes a scenario case study of East Anglia as a dustbowl.

This blogpost is the twelfth in the Lunar Society series; others are listed in this post: Food security: Is the UK already in crisis?