What story should we tell about emergency food distribution during the pandemic?

That it was inadequate and inefficient?

Inevitably so because the local government and the voluntary sector simply didn’t have the resources or the capability to meet the scale of the demand (see last section)?

This is what the numbers show in the Food Cities 2022 Learning Partnership case study about Birmingham’s voluntary sector mobilization for efficient food distribution in Birmingham, UK.

What do the numbers in the case study reveal?

Of course, not everyone in the city needed extra food, or for it to be delivered to them. So how many did? For that, see the table below:

These percentages are taken from the case study. It cites  2.3% of adults in the city reported experiencing hunger, 11.8% had struggled to access food, and 12.4%  had worried about food security. (3)

Take the adults who reported experiencing hunger: 60 tonnes of food is 16% of what they need. A food parcel is a help to them, sure. But nowhere near what they need, 84% less. Where did the rest of what they needed, the 84% come from, and what quality food were they able to access?

And take a closer look at the contents of the food parcel next to the table above. It’s not good grub, is it? And it wouldn’t last long, far less than a week. (4) (5)

Efficient food distribution?
The case study also states that to distribute approximately 15 tonnes of food per week, 6-10 drivers and about 8 packers per day were needed.

That means those 60 tonnes needed the services of 24-40 drivers and 32 packers for the week. All volunteers, so no money paid to them for their work. We need add in, though, the costs involved in recruitment and vetting of them, the call centre, the management of volunteers and paid employees, other resources including storage facilities, plus logistics support.

This is a lot of effort for 0.375% of the city’s food for a few weeks. There has to be a better way of organising food distribution.

Why is it important to tell this story?
The vital lesson to learn is the role of national Government:

Covid taught us a lot about collective resilience, about communities, about neighbourliness. But the Government cannot depend on that. What’s needed is ‘a state that scaffolds self-organisation’. (6) And that doesn’t come cheap.

All of the above is is not to undermine what City Council and the voluntary sector did. The sheer hard work and great good will generated was admirable. And for sure, much better than nothing. But the results were woefully inadequate given the scale of the problem. Nor was it an efficient operation.

And finally, emergency planning is a strategic matter, not a tactical one. Here in the UK, that’s currently a matter for national, not local government. 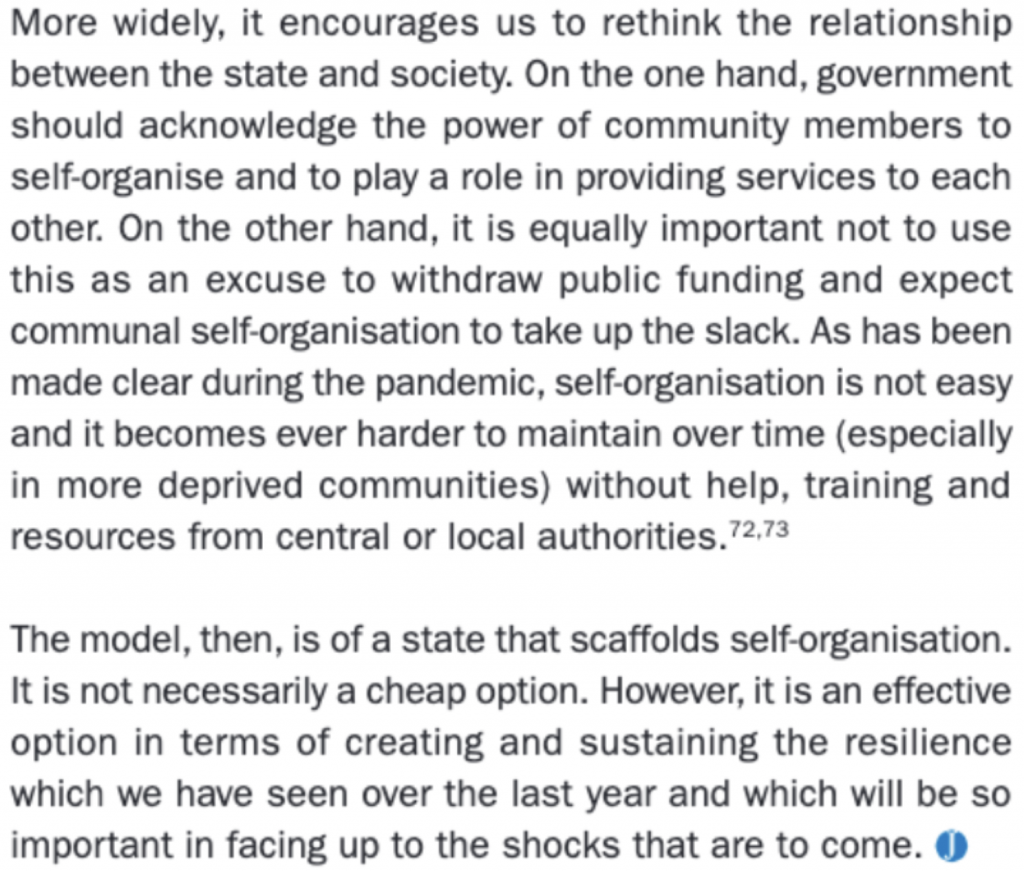