The Game is an engaging, informative scenarios thinking tool to enable decision-makers in local and national government, emergency planners, senior leaders in the food sector, university researchers and other policy influencers to understand existing and emerging risks  to our food system, and to explore what resilience in the food supply network means for their communities.

We’re currently developing  a version of The Game in the context of the deeply worrying climate-related events we’re now witnessing, and taking into account the impact of Covid and this Brexit on UK food supplies.

This, and the story of The Game so far, is summarised in this info-graphic below (click anywhere on it to access links). Please do get in touch if you want to contribute: 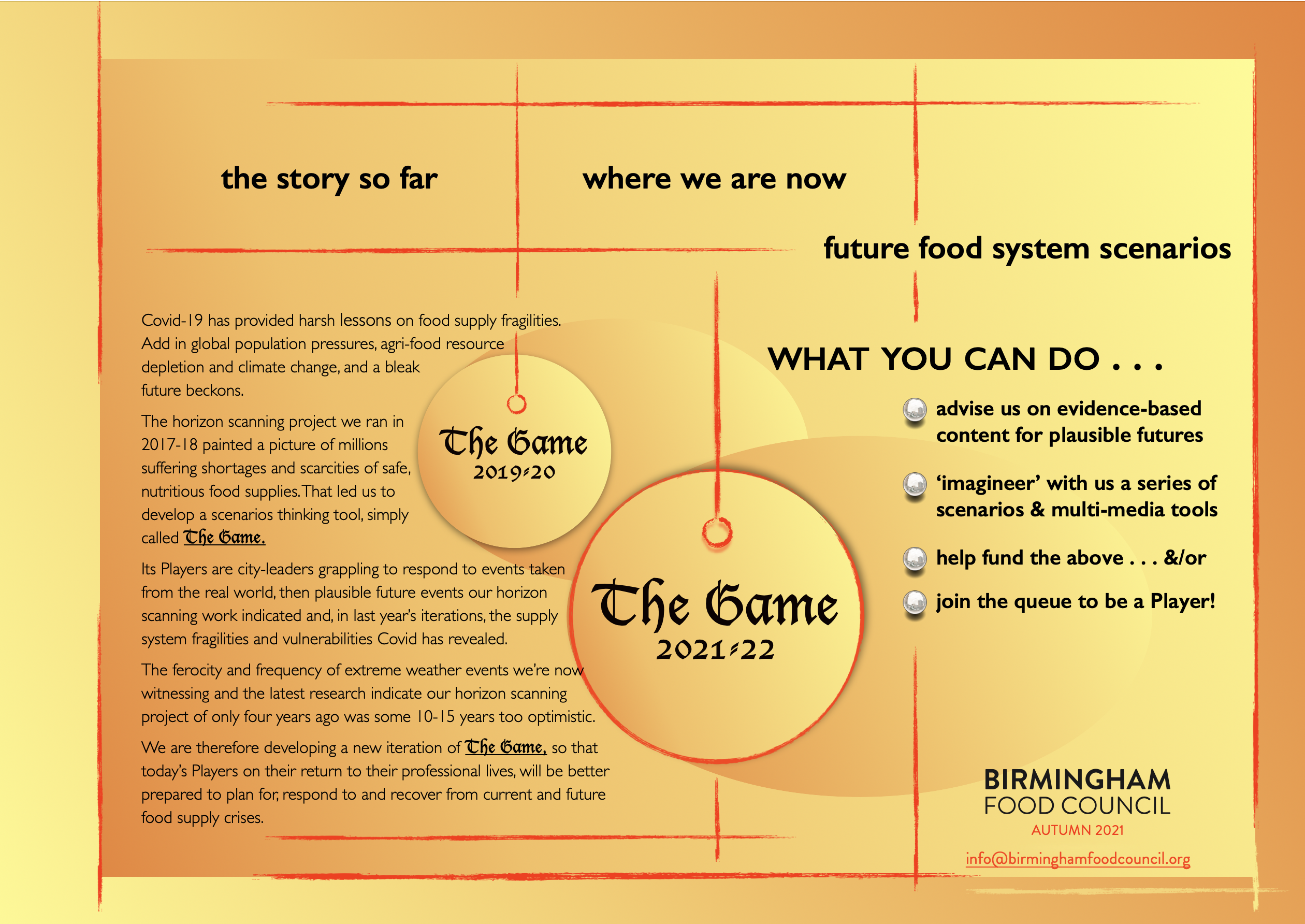 The Game during the pandemic . . .
Just before the first UK lockdown in March 2020, previous Players called to say The Game is playing out in front of our eyes. We’re in it, aren’t we! (see our Covid-19 Commentary series of posts).

One Scenario: Buffer contingency stocks
Three months later, in June 2020, we began to develop a version of The Game to explore with previous Players and others from deep within the food supply system, how the UK food supply system could be better prepared for future system shocks; see this Future System Shocks series of posts and this Report: One Scenario: Buffer contingency food stocks.

We’re currently designing a  version of The Game for a client. In this version, Players’ responsibility is for the food supplies to the population of the UK.

Pre-Covid, The Game was designed to be played in groups of 4-6 Players in charge of a city.

It is the Players’ responsibility to make decisions and undertake actions to protect their citizens’ access to sufficient, safe and nutritious food in response to events given to them by our (single) Player.

Our Player represents the dark forces already threatening every city’s food network to some degree — climate change, resource depletion and population pressures and, if a client requests it, some of the responses to and mitigators of these forces.

Our data bank of events include some that have happened in the previous few months, as well as foresight assessments from reputable, cited sources.

There is a variety of ways we can deliver The Game. Players can participate together as a solo team, or with more groups who play either collaboratively following the same or different scenario stories, or in competition with each other:

As a series of Games running in parallel 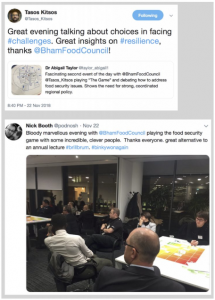 We piloted The Game four times through 2018, the final delivery having 30 Players from different organisations and professional backgrounds, each participating in one of five Games, running in parallel simultaneously and with different storylines playing out.

The debrief included comments by three Observers in our team, as well as a showing of our video Strange New World.

Players have included people from these organisations: 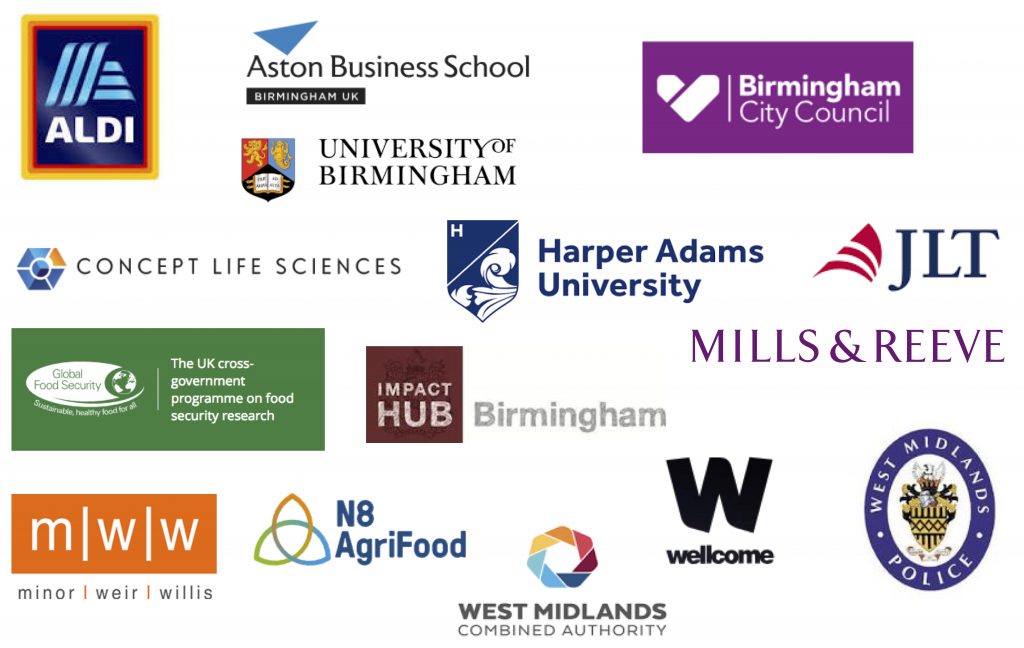 Why we devised The Game
Local organisations, including local authorities and emergency services, have statutory duties to assess risks to their communities, and to produce resilience plans. The population have ‘soft law’ rights under the UN Declaration of Human Rights (1948), and the Rome Declaration (1996), placed the responsibility on Governments to ensure access to sufficient supplies of safe, nutritious food.

As well as our report on Global Risks to UK Food Supplies mentioned above, in January 2018, we published our horizon scanning project report Back from the future. It highlighted the scale and urgency of the threats on our food supply system, and exposed the inability and/or lack of capacity within governments and other institutions to respond.

Additionally, the fragilities and vulnerabilities of the UK’s food supply system have been highlighted by the impact of both Covid and this Brexit.

An added note about the phrase ‘Nine Meals from Anarchy’
This phrase comes from a catchy line by journalist Alfred Henry Lewis way back in 1906, when he wrote There are only nine meals between mankind and anarchy. It begs the question about the if and when of civil unrest breaking out from a population faced with going hungry.

We all rapidly lose the energy enough to riot after three days of going without any food; on the fourth day, thee and me is likely to lack the energy to do anything other than loll around feeling weak, tired and downright scared. So just the prospect of certain food shortages can enough to cause panic buying, and severe shortages of calorie-staples such as bread, rice or potatoes might well lead to rioting.

Many people across the world, including some here in the UK are facing a nutrient famine . . .
The challenge faced by most of the world’s population now, however, is not the lack of available calories, but a lack of the range of nutrients needed for a healthy, active life. The effects are sometimes delayed, often not understood, and for sure not imminently life-threatening.

People don’t riot for a lack of, say, vitamin D, even though it’s estimated roughly one in five people in the UK has low vitamin D levels and, given the lack of economic access by many to sufficient safe, nutritious food, a significant proportion of the UK population have lower levels other macro and micro-nutrients than hey need for a mentally and physically active and healthy life.