Our Narrativium projects are the way we engage the artistically talented members of the up-coming generation with projects to communicate aspects of our work. (For the origin of the word ‘Narrativium’, scroll down to the bottom of the page.)

We’re adding to these projects along with, to date:

The Game (aka Nine Meals from Anarchy): We developed this scenarios ‘game’ in response to the chronic stresses, long duration events and potential sudden shocks to the food system, and the resultant risks and resilience of local food supplies. Players are given a city, which is their job to ensure sufficient supplies of safe, nutritious food to their population in the face of events that have recently happened at the outset, then plausible events five and then ten years into the future.

The Hand That Feeds: A musical about food crime; see this recently edited 46-second YouTube video including interviews with Professor Chris Elliott and Sorting the beef from the bull author Nicola Temple:

Composed by Sara Colman, and with a libretto by novelist Mez Packer, with two actor-singers, and musicians Xhosa Cole (who was voted BBC Young Jazz Musician of 2018) and Al Gurr, it was directed by Grame Rose and produced by Charlotte Gregory. It was a huge success,  performed at two venues the city centre (Birmingham Bullring (on a sunny Saturday afternoon, when 2,500 people stopped to watch and many thousands more heard it) and in Victoria Square over a Tuesday lunchtime), and at Castle Vale, the home of the community choir who participated as performers alongside professional artists.

A Youth Programme is a series of visual arts projects, curated by Ian Sergeant. This includes:

The “graffeati project”  we delivered in July 2018 as part of the Digbeth Dining Club Food Festival at Highbury Hall.

An Archetypal Household project which is a data research and writing project led by Suriya Roberts-Grey. Its purpose is to have memorable ‘archetypes’ representing x-% of households in the city, a somewhat crude but nonetheless useful way of assessing the impact of stresses, degradations and failures in food supply systems.

This project is also part of our Action Research Programme. Its aim is to explore and quantify ways in which the city can contribute to food resilience and security at a local and national level, as well as globally.

We’re designing the means by which we can record info about 1000 meals prepared and eaten in good company across the city.

Kate transferred the IP from the CIC that produced the food crime musical to the Birmingham Food Council CIC in 2018.This IP also included:

Origin of the name ‘Narrativium for these projects 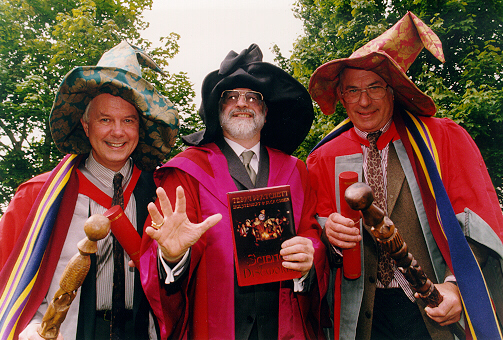 It was Terry Pratchett (centre in the photo) who coined the term ‘narrativium’ as the element upon which we humans run.

It was New Optimist Jack Cohen (right) who describes us humans as pan narrans, the storytelling ape rather than homo sapiens. (And Jack and mathematician Ian Stewart (left) joined forces with Terry Pratchett to write the Science of Discworld series, and thereby became Honorary Wizards of the Unseen University with due ceremony at the University of Warwick when this photo was taken.)

The facts and stats of science have little easy appeal for many people. Yet, as Terry so memorably illustrates, all humans like a good story.

That’s why Kate Cooper set up the Narrativium Projects in early 2014 to ‘translate’ the scientist and expert input within the Birmingham 2050 Scenarios Project (which was about possible food futures for the city) . . . out of which came the request from Birmingham Public Health to Kate to set up the Birmingham Food Council.﻿