In November 2013, Professor Chris Elliott asked me if I could provide him with a case study of how a major UK city, i.e. Birmingham, could tackle food crime. And the Elliott Review Birmingham was born.

When the Government published the Prof’s Elliott Review into the Integrity and Assurance of Food Supply Networks with a cut’n’paste version of our ‘best case scenario’ gratifyingly getting the last few pages, it did cross my mind that just about no-one in the city would read about even this small contribution, let alone the whole of the Prof’s sterling work.

And so an idea was born.

Arguably, this whole shebang of an idea began way back in 1999 when I was ‘subject leader for innovation’ at the Warwick Manufacturing Group I felt this position gave me a certain licence; I could pass anything off as ‘innovative’. And it was really hard to persuade manufacturers than innovation was anything less than dangerous. In mitigation, we should all be glad that things like drugs and cars are made according to very strict processes and procedures. But what if your competitor is stealing a march on you?

I decided to introduce an evening session involving a Ben Markland jazz quartet within the week-long residential programme on on manufacturing professionalism. Music, like manufacturing has very strict rules, jazz perhaps more than most.

(I confess, my management consultant past bore fruit when I told the bosses that  ‘Ben Markland et al are in the fast-moving consumer goods business with simultaneous manufacture the whole way down the supply chain’, a phrase the FT, no less, nicked when talking about jazz in business.)

The session proved huge fun, and they learned some very basic stuff — like the unusual happens and can be brill, like the very rigidity of rules can force creativity and all that jazz.

(Remarkably, nearly two decades on, this session is still going strong on the programme.)

Two members of that quartet were Sara Colman and Al Gurr, both involved on this musical about food crime “The Hand That Feeds”. (And Al, yup of ‘Ben Markland et al’.)

I’d long wanted to commission Sara to write some songs. Here was the chance.

I also teamed Sara up with the novelist Mez Packer as the librettist. Neither had met each other, but I knew they’d get on well and they had complementary talents. Over-lapping talents, in fact; I hadn’t realised Mez had toured Europe as a jazz singer yonks ago.

Sara was keen to find a role for the incredibly talented young musician, Xhosa Cole whose career I’ve been following ever since I heard him do some magical sounds with the Jazzlines Summer School a couple of years back. I leapt at the chance. Of course there’s a place for such talent. I’ll wager there’ll be a fair number of people who’ll remember they first heard him on 14th May 2016 outside St Martins in the Bullring.

James O’Hare, the guy on the left of these three singing the Vodka Rap, led the brilliant Castle Vale Community Choir. 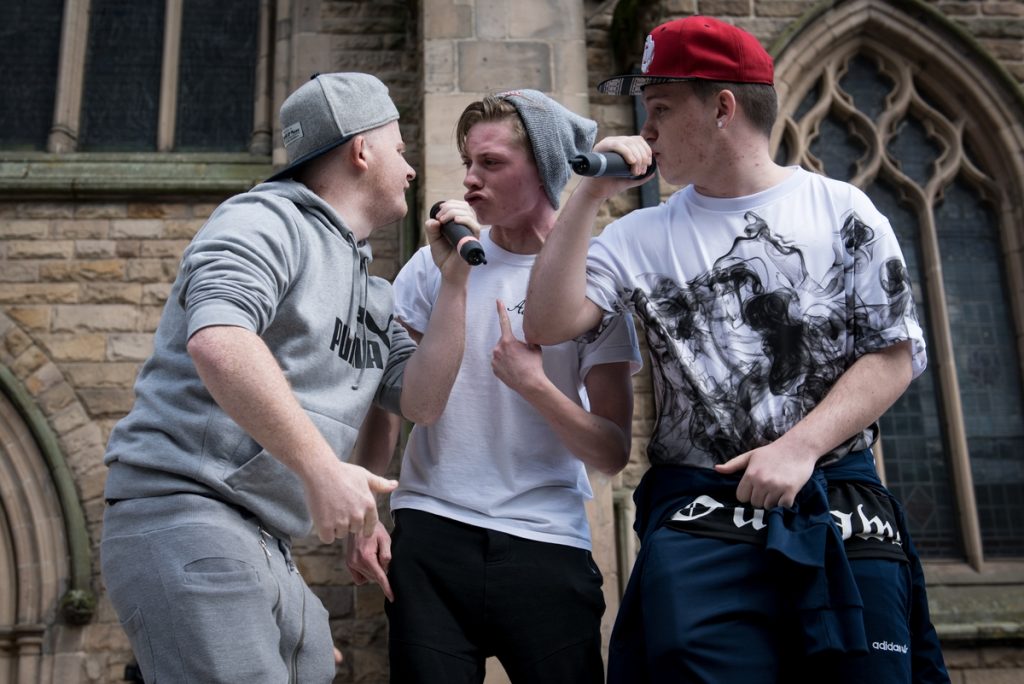 Graeme Rose of Stan’s Cafe directed it. He’d led the first Narrativium Project. I was really pleased — and relieved that he said he’d direct this. I learned on the first project that the man often looks incredibly worried; I think it might be a quirk of his face. I hope so. Whatever, he’s got this brilliant capacity to make a drama out of my crisis of how the heck to translate this sketchy idea into a great piece of theatre.

He also knows people in the business. And, importantly, how to get them involved. To me, perhaps his greatest stroke of genius was to get Charlotte Gregory as our producer. Hilariously funny, utterly charming and with a lovely soprano voice (so she’s one of the backing singers) she can also pen in, pin down, generally corral this mixed bag of people into a stream-lined production machine.

Charlotte’s organisation skills allowed Graeme’s two choices of performers, Sam Fox of the Kiln Ensemble and Anthony Miles to do their thing and jiggle their schedules to be with us.

I don’t think I’m giving away too much of the plot to tell you that Sam does an astonishingly accurate rendition of how I imagine a sheep would sing, as you can hear in this trailer video made by two of Mez’s undergrad students at Coventry University — it’s a tad too long, but wait for the sheep . . .

Graeme and Charlotte between them decided to ask Chris Cuthbert to do all the technical stuff. Graeme Braidwood was the photographer on the project, and Mat Beckett of River Rea Films recorded it and make a series of videos about it, including this one which summed up the first performance in Birmingham Bullring on sunny Saturday afternoon in May 2016 in front of thousands of Birmingham citizens — our hashtag #StopFoodCrime trended #3 across the UK:

Caron Lyon was in charge of getting word out about it all on social media and came along to our “development day” at our partner, MAC Birmingham on 17th March 2016.

And that is the story from my initial idea (then aka ‘Kate’s mad opera’)  through to the beginning of its production in March 2016 and on to its world premiere three months later.