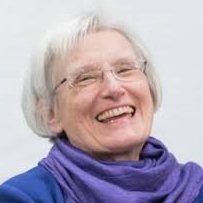 Formerly a management consultant advising blue-chip companies on communication (or, more accurately, lack of it), she founded The New Optimists in 2009 as a way of putting regional scientists on the map. She asked over 80 of them the simple question What are you optimistic about? and then published their responses in a hardcopy book The New Optimists: Scientists View Tomorrow’s World & What It Means To Us (now out of print) launched by the BBC’s Science Editor, David Shukman, on the first day of the 2010 British Science Festival. This was followed by a Kindle Challenging Cancer.

Wondering what to do with the brainpower she’d unleashed, she set up The New Optimists Forum and set about working with them — and other scientists, social scientists and socio-political decision-makers in the West Midlands — to carry out the Birmingham 2050 Scenarios Project (2011-14) to explore possible food futures for Birmingham in 2050.

This had several spin-offs as well as the Birmingham Food Council including the Elliott Review Birmingham and The Hand That Feeds, a musical about food crime. This in turn led to our Narrativium Projects which, through storytelling in one way or t’other, illuminate what we do.

She served as Chair of the Birmingham Food Council CIC Board 2014-2018, stepping down at the December Board Meeting.